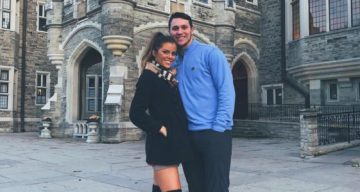 Josh Allen is topping his stats every season since his breakout season in 2019. And the Buffalo Bills quarterback has had one constant throughout his career success in the form of Brittany Williams. She is Josh Allen’s girlfriend, and Williams has supported him through the highs and lows long before they officially began dating. This Brittany Williams wiki elaborates on their relationship.

Brittany Morgan Williams was born on April 26, 1996. Her family hails from Clovis, California. Brittany and her brother, Jordan, are the children of Megan and Chris Williams.

Chris Williams is the former superintendent of the Paso Robles Unified School District. He resigned in 2018 and received a $113,409 payout.

Williams graduated from Clovis North High School where she was a member of the Dolce Dance Studio. This talented dancer has been a cheerleader for most of her student life.

She earned her degree in agricultural business operations in 2018 from California State University, Fresno. During her time at Fresno State, Williams gained much attention as a cheerleader.

Williams is not a professional cheerleader, but she does continue to support her boyfriend and the Buffalo Bills at their games. Alternatively, she is gaining her own following and fame on social media.

With 44.9K followers on Instagram, Williams is a growing influencer. She mainly posts about fitness, including Pilates routines on her Instagram page.

Williams and Allen are both Californians who grew up together. According to their social media, they have been dating since 2017, but reportedly knew each other long before that. Williams once referred to Allen as her crush of eight years before she could call him her boyfriend.

Allen famously got turned down by Fresno State where Williams was a cheerleader. He instead attended the University of Wyoming.

A year after the couple officially began dating, Allen was selected by the Buffalo Bills in the 2018 NFL Draft. Williams now resides in New York with Allen and is a constant presence at Bills games along with other WAGs.