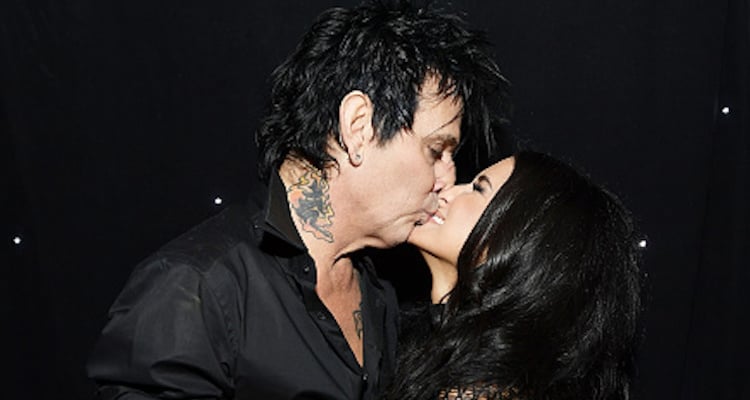 If you’re alone once again on Valentine’s Day, then this may not be the news you want to hear. Brittany Furlan and Tommy Lee are engaged! Keep reading if you want to know more about the future bride’s biggest moment.

It looks like 2018 is off to a good start for the 31-year-old comedian/actress and her 55-year-old Mötley Crüe fiancé! They have been dating since last year but clearly, that was all the time Lee needed to take the next big step. The details of the ring haven’t been announced yet but it’s a huge heart-shaped diamond, encompassed with smaller diamonds, one most women could only dream of getting!

The post shows a quick clip of the couple’s hands intertwined, as Furlan shows off her gigantic diamond-shaped engagement ring.

If you follow Furlan on social media, you’d become familiar with her relationship with the former rock star and it really seems that the two fit extremely well together. She’s a complete goof—and you literally can’t help but love her. And he’s…well…older and wiser, and we’ll leave it at that.

Though Furlan isn’t a huge celebrity, she does have a solid fan following and her comedy/acting skills have earned her quite a few credits to her name. She has made appearances in quite a few films after she catapulted to fame through Vine.

If you’re looking for a daily dose of laughter, you should really consider giving her a follow. She’s actually hilarious. (And, since she pretty much documents everything on social media, you might even see some wedding planning!)

While some might be bitter about the cliché of getting engaged on Valentine’s Day, many were quick to reply to Furlan and offer their support on her engagement.

One follower wrote, “Congrats!! There’s been such a huge change in you, you are so much happier! I love it!! Gorgeous ring!! [sic].”

Another follower wrote, “Very cool, can’t wait to see the spectacular wedding pics! A beautiful ring for a beautiful person, congrats to both of you.”

This will have been Lee’s fifth engagement and his fourth marriage. He was famously married to ex-wives Heather Locklear and Pamela Anderson, but the marriages ended in divorce. As many may remember, Lee spent several months in jail for abuse allegations against Anderson, in 1998.

“Unfortunately, everybody knows about the bad times — so overblown and completely out of context and out of control— and nobody knows about the good stuff,” said Lee in a 2004 tell-all interview with Rolling Stone. “Of course I wanted her in there— she’s the mother of my two beautiful boys. We just sat down and started reminiscing about some old stories — and she totally nailed me for my terrible memory.”

He added, “I just figured it’s a great story to share with people about what I did during probably the s******t time in my life. Hopefully it’s a once-in-a-lifetime experience, don’t really wanna go do that again, not a fun tour. And I made a deliberate choice— ‘OK, I can make this the worst f*****g time in my life, or I can be completely positive in here [jail] and do some work on myself and figure out a) why I’m here, and b) who’s Tommy?’ It’s a story about how I actually met myself again, really.”

Thankfully, Lee is a changed man and Furlan has nothing to worry about! So far, there have been no wedding details released at the moment, but we’re sure Furlan will share every step of planning towards her big day.