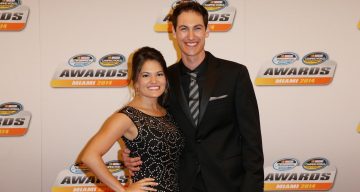 Joey Logano’s wife, Brittany Baca, is on cloud nine after her husband won his first NASCAR Cup title on Sunday (Nov. 18). She’s also happy to share this victory with their baby boy named Hudson Joseph Logano, who was born earlier this year. Baca studied psychology in college and is the current vice-chair of the board of the Joey Logano Foundation. She loves traveling and works out regularly to keep a fit and trim body. Read on to know more about Brittany Baca.

Joey Logano has won his first NASCAR title, and guess who’s the happiest about it? It’s Joey Logano’s wife, Brittany Baca. It isn’t the only milestone Baca and Logano have celebrated this year. On January 5, both of them became parents to a healthy baby boy, whom they lovingly named Hudson Joseph Logano.

While Logano’s name is being splashed all across sports media for his incredible NASCAR win, people are curious to know more about his wife, Brittany Baca. Here are a few facts from Brittany Baca’s bio.

Baca is one of two children born to her parents, Michelle Renee Wood and Ray Abraham Baca. Brittany has a brother named Kyle Baca who graduated from Central Piedmont Community College. Kyle is also an exceptionally talented ice hockey player.

She Studied Psychology in College

Brittany attended David W. Butler High School in Matthews, North Carolina, and graduated in the year 2010. After that, she studied psychology at UNC Charlotte in North Carolina.

Cupid Struck at an Ice Rink

People are also interested in knowing how Baca and Logano first met and how their relationship blossomed. According to reports, the couple met when they were both working at Danielle Logano’s ice rink. Danielle is Logano’s sister and an accomplished figure skater in her own right.

Baca used to work the concession stand and was the first girl Logano ever went out with. She was also the first girl he ever kissed. And he got even luckier when he proposed to Baca and she readily accepted his sincere proposal.

Logano announced his engagement to Baca on November 13, 2013, and a year later, the couple walked down the aisle on December 13, 2014. Joey Logano and Brittany Baca’s wedding took place in Ashville, North Carolina, in the presence of their families and friends. It was a joyous occasion for everyone present!

Baca Is Vice-Chair of the Joey Logano Foundation Board

Baca pursued apparel and fashion at UNC Charlotte before ultimately earning a degree in psychology and sociology. She’s always had a desire to help community members in need, however, and now serves as vice-chair and secretary of the Joey Logano Foundation board.

Logano established the foundation in 2013, moved by a life-changing visit to Joplin, Missouri, where he helped rebuild a family’s home following a devastating tornado. The non-profit is dedicated to providing second chances to people who need it most.

In her role on the board, Baca hopes to “initiate change in the community and bring opportunity to those in need.”

But she always makes time to attend Logano’s races and is often seen on racing days cheering for her husband.

She and Logano have become famous for their Victory Lane “selfies.” When Baca gets time off from her hectic schedule, she devotes it to working out. She admits that working out isn’t easy for her. She has said, “I have a hard time working out with no push, so I have a trainer twice a week that gets my booty in shape. Outside of that, I love hiking and Zumba.”

She also loves to travel and likes to know the history of the place that she’s visiting. Two of her favorite destinations have been Charleston, South Carolina, and Mexico.

Went for a hike for Brittany's birthday! Frank barely made it to the top ha pic.twitter.com/CeGQ1BXeq4

Right now, Baca’s celebrating Logano’s incredible NASCAR win, which has come as a wonderful surprise. She’s also taking care of their baby boy and supporting her husband as he staves off tough opposition in his racing career.

With a champion husband at her side, a growing baby boy at home, and a burning desire to have her own independent career, Brittany Baca is firing on all cylinders!