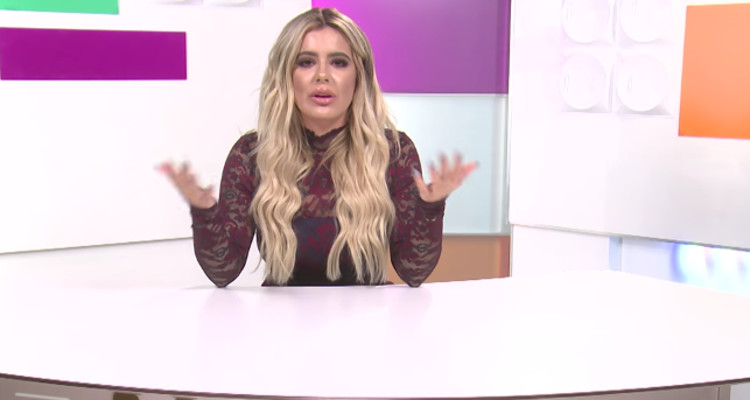 Brielle Biermann might want to spend all her time with her boyfriend, baseball player Michael Kopech, but her mother still has a say in her daughter’s whereabouts. Kim Zolciak tried to pull the reigns on her daughter’s romantic getaway with her Chicago White Sox boyfriend, and we’ve got all the details you need, right here.

At the age of 20, Brielle Biermann may be old enough to have a boyfriend and go away with him, but she still has to answer to her mother, Kim Zolciak. Michael Kopech’s girlfriend was with the pitcher at the picturesque Niagara Falls, when Biermann’s mother captioned an Instagram post, saying, “Any day now you two can get your happy a**es home! @briellebiermann @mikop34 #TheyAreBothPretty.” Who is Brielle Briemann? Find out more about the reality star’s daughter with details from Brielle Briemann’s wiki.

Kim Zolciak is 38 years old and is one of the stars of The Real Housewives of Atlanta. The mother of six has made many aspects of her life public, but not much is known about her eldest daughter. Brielle Biermann’s age is just 20, and she already looks a lot like her mother. Biermann is dating Boston Red Sox Minor-League pitcher, Michael Kopech and even though the relationship is long-distance, they make the most of their time together. Well, as long as they can before Zolciak starts laying down the rules about her daughter!

The Self-Proclaimed “Barbie and Ken”

Biermann and Kopech are madly in love, and are constantly by each other’s side. On New Year’s Eve, Kopech posted a picture of himself and his girlfriend at Niagara Falls, as they cuddled up wearing baby blue winter gear. He captioned the post, “Wouldn’t want to fall into 2017 with anyone else.” Cute, ain’t it? They took a road trip and drove through Texas for this romantic getaway. Biermann captioned an Instagram photo of themselves in the car with, “We’re a better version of Barbie and Ken.”

She Likes Him Because He’s Thoughtful

Biermann revealed to the The Daily Dish how she met Kopech, explaining that they got together after an acquaintance had introduced them. He then contacted her via Twitter and they soon started dating. Biermann says, “He’s pretty nice; He’s really sweet. He’s just thoughtful. He’s very thoughtful, and I am not used to thoughtfulness, and I feel that I’m pretty abrasive sometimes because I’m not used to someone who’s so nice, very relaxed and chill. I’m used to rude people.”

In December 2016, Brielle Biermann and Michael Kopech went to the Bahamas to enjoy a sun-soaked holiday together. Biermann’s Instagram account is full of hot pics from her vacations with Kopech, relaxing on the beach, going for a swim, and just hanging out with her boyfriend. Though her net worth is not known, it doesn’t look like money is an issue for Biermann, who has made regular appearances on The Real Housewives of Atlanta, as well as the spin-off show, Don’t be Tardy, following her mother’s wedding to Kroy Biermann. Considering that Kim Zolciak’s net worth is $1.5 million, it looks like Biermann can afford to treat herself.

Also Read: Georgina Rodriguez, Cristiano Ronaldo’s Girlfriend in 2017: The Secret Is Out!

She Did a “Nude” Photoshoot with Her Mom

Brielle wants to have a career in showbiz. Her dream is to sing, act, and model for Victoria’s Secret. She has already taken steps in her modeling career by walking the runway at the Michael Kuluva show during the 2013 New York Fashion Week. In October last year, Kim Zolciak and her three daughters posed for Zolciak’s skincare line, Kashmere Kollections. Though the four of them appeared to be nude, Zolciak set the record straight, captioning the Instagram post with the hashtag, “#wearenotnakedsodontstart.”