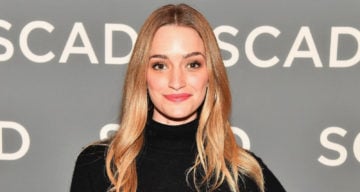 Brianne Howey from the "The Passage" on February 8, 2019 in Atlanta, Georgia. (Photo by Paras Griffin/Getty Images for SCAD aTVfest 2019 )

Brianne Howey has mastered a variety of roles on screen, including a vampiric “Viral” in the latest Fox drama, The Passage. From comedy to horror to sci-fi, this actress has done it all and is not slowing down anytime soon. Our Brianne Howey wiki will certainly give you reason to keep an eye on this rising starlet.

Brianne Howey was born on May 24, 1989 and is 29 years old. She and her sister, Cailan Howey, grew up in La Cañada Flintridge, California.

Brianne attended the all-girl Flintridge Sacred Heart Academy and later moved to the east coast for college. She graduated from New York University’s Tisch School of Arts in 2011 with a BFA in theater.

While at Tisch, she built her resume with a number of roles in TV and film. After graduating, she returned to Los Angeles and pursued her acting career.

She Started with Guest Roles on TV

As a child, Howey dreamed of becoming a flight attendant and traveling the world. However, her old inclination towards theater and improv classes turned into a career that took her places.

While still a student at Tisch, she starred in short films before bagging her first TV role in 90210, the Beverly Hills 90210 reboot. She later had an appearance on NCIS.

Howey’s first role as a recurring character was in The Middle. That was followed by a three-episode role in Revenge and a four-episode arc in Twisted.

Over the years, Howey has appeared in guest roles in shows like Criminal Minds, Baby Daddy, Hart of Dixie, Hawaii Five-0, and many other TV shows.

She also had a role in the Jennifer Aniston, Jason Bateman movie Horrible Bosses 2.

Her acting credits steadily grew and soon, she found herself in London filming the Comedy Central UK series I Live with Models. She had sold her apartment in L.A. to move to the U.K. for the role. Although it’s filmed in London, the show is set in Miami, Florida and is essentially an American sitcom.

A constant stream of guest roles allowed Howey to try a variety of characters. “You have to be a sponge and take it all in, and you get to meet so many people in this short period of time,” she said. “It helps you learn.”

Her career is only soaring. She recently worked on the movie Plus One, which is currently in post-production and expected to be released in 2019.

Find Out Here: If Kamala Harris Related Is Related To Jussie Smollett

She Is a Regular in Fox Shows

After a two-part appearance in Fox’s Scream Queens, Howey got her big break in the Fox horror series The Exorcist. She portrayed Kat Rance, the odd daughter in the Rance family who is dealing with a demonic presence in their home.

Howey returned from London after wrapping up I Live with Models, found a new apartment in L.A., and began working in Hollywood. The folks at Fox were probably impressed by her talent since she was one of the first in the lineup of actors cast for their new post-apocalyptic series, The Passage.

The same casting directors that cast Howey in The Exorcist were there at her audition for The Passage. “[I] did the scene, and he kind of gave me a smile, and I was like, ‘I don’t really know how to read this,’ but then I got a callback. And then another one. And then you make it to the testing level, and everybody’s in the room with you, and you kind of bust it out, and that’s how I landed there,” said Brianne about the casting process.

Based on Justin Cronin’s bestselling book trilogy and a screenplay by Ridley Scott, The Passage is set in the future where a botched government experiment on death-row inmates has turned them into voiceless, veiny beings with vampire-like abilities called the Virals.

A huge nod to the entire #ExorcistCongregation who voted for us in yesterday's @peopleschoice awards… thank you so much!! While we didn’t win, it was an honor being nominated and having you with us on this @theexorcistfox journey so far! 😈 #PCAs

Howey plays one of the Virals, Shauna Babcock. Incidentally, she also worked in a movie titled Viral. She and her fellow Virals spend more than two hours in makeup getting the veins and prosthetics on.

In the books, Babcock was a man, so the original author, Cronin appeared to have his reservations about Howey’s Shauna. However, after watching the series, Cronin reached out to Howey and supported her work.

She’s in a Relationship

Much to some broken hearts, Brianne Howey is off the market. Judging from her Instagram, she’s dating one Matt Ziering.

He’s not a celebrity and appears to be an attorney based in California. He acquired his Juris Doctor in 2015 from Loyola Law School at Loyola Marymount University in California.

Better late than never? Happy Valentine's Day. Doesn't her face just scream how lucky she is? Fine. I'm the lucky one. 💝💘💗☣ @briannehowey my 😇👸🏼. #heyworld #gfoftheyear #rumorsofmydeathgreatlyexaggerated