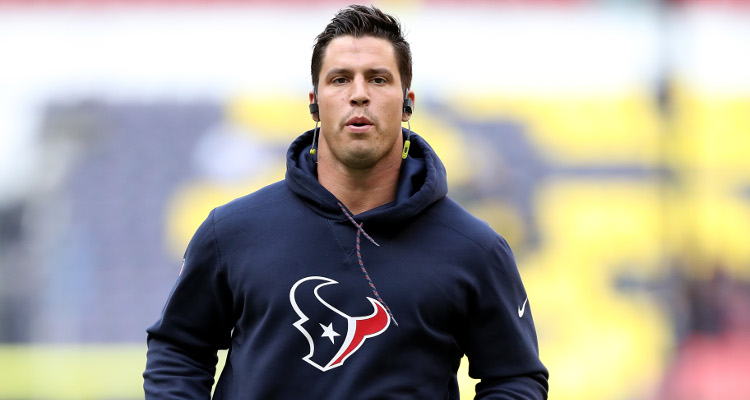 Houston Texans linebacker, Brian Cushing is in the limelight for all the wrong reasons. Recently, the 30-year-old was suspended for 10 games after violating the NFL’s performance-enhancing substances policy. At this time, Brian Cushing’s wife is standing by him. Keep reading to learn more in our Megan Cushing wiki.

Houston Texans player Brian Cushing has been suspended for 10 games for not complying to the NFL’s policy on performance-enhancing substances. It was reported that he will return on November 28. Talking about his suspension, the NFL released a statement, “Brian Cushing of the Houston Texans has been suspended without pay for the team’s next 10 games for violating the NFL policy on performance enhancing substances. Cushing’s suspension begins immediately. He will be eligible to return to the Texans’ active roster on Tuesday, November 28 following the team’s November 27 game against the Baltimore Ravens.”

Cushing’s lawyer, Harvey Steinberg, said that his client “is aware of the negative impact he has had on his team and most important his fans. It is with the deepest remorse that he humbly apologizes to his fans, teammates and coaches.” It is definitely a hard time for Brian Cushing and his family. Right now, Brian Cushing’s wife and family are his pillars of support. If you want to know more about Brian Cushing and Megan Cushing, then keep reading.

Born on July 22, 1989, in Draper, Utah to two-time NCAA All-American wrestler Ben Ohai and Cindy Cook, Megan Cushing’s age is 28. She has three sisters: Cami, Aubrey, and Kealia, a professional soccer player and current captain of the Houston Dash. After graduating from Alta High School in Salt Lake City, she attended the University of Southern California, where she majored in psychology. While at school, Cushing played soccer as a midfielder for the school’s team, the Trojans. She also won the NCAA championship in 2007. Currently, Cushing, her husband, and their two gorgeous children live in Houston.

At USC, Cushing met football player Brian Cushing. The couple started dating right before the 2009 NFL draft when he was selected by the Texans. The couple walked down the aisle and have two boys: Cayden, born in 2012, and Kai, born in 2014.

My sister @kealiamae has been nominated for NWSL MVP. Please go vote for her at NWSLsoccer.com and while you're there, please vote for her awesome teammate @racheldaly3 for NWSL rookie of the year ! Link in bio! #nwsl #mvp #rookieoftheyear #11goals #goldenboot #dashon #houstondash #uswnt #puma #soccer I also voted @luuuuluuu Lauren Barnes for defender of the year !

Of the four girls in the Ohai family, Megan Cushing sister Kealia, 25, has also made a name for herself. She is a professional soccer player who went to the University of North Carolina and in 2012, scored Team USA’s winning goal in the FIFA U-20 Women’s World Cup. “Soccer has been a huge part of my life and has taught me so much about my health and fitness. I am so lucky to live in Houston and be with my family every day. My sister and I love training with each other,” she writes in the blog she has with Megan,  I Declare, which covers topics like food, fitness, and fashion. Megan Cushing’s Instagram is filled with pics of her cute family. So, if you want to know what goes on in the Cushing house, give her a follow!