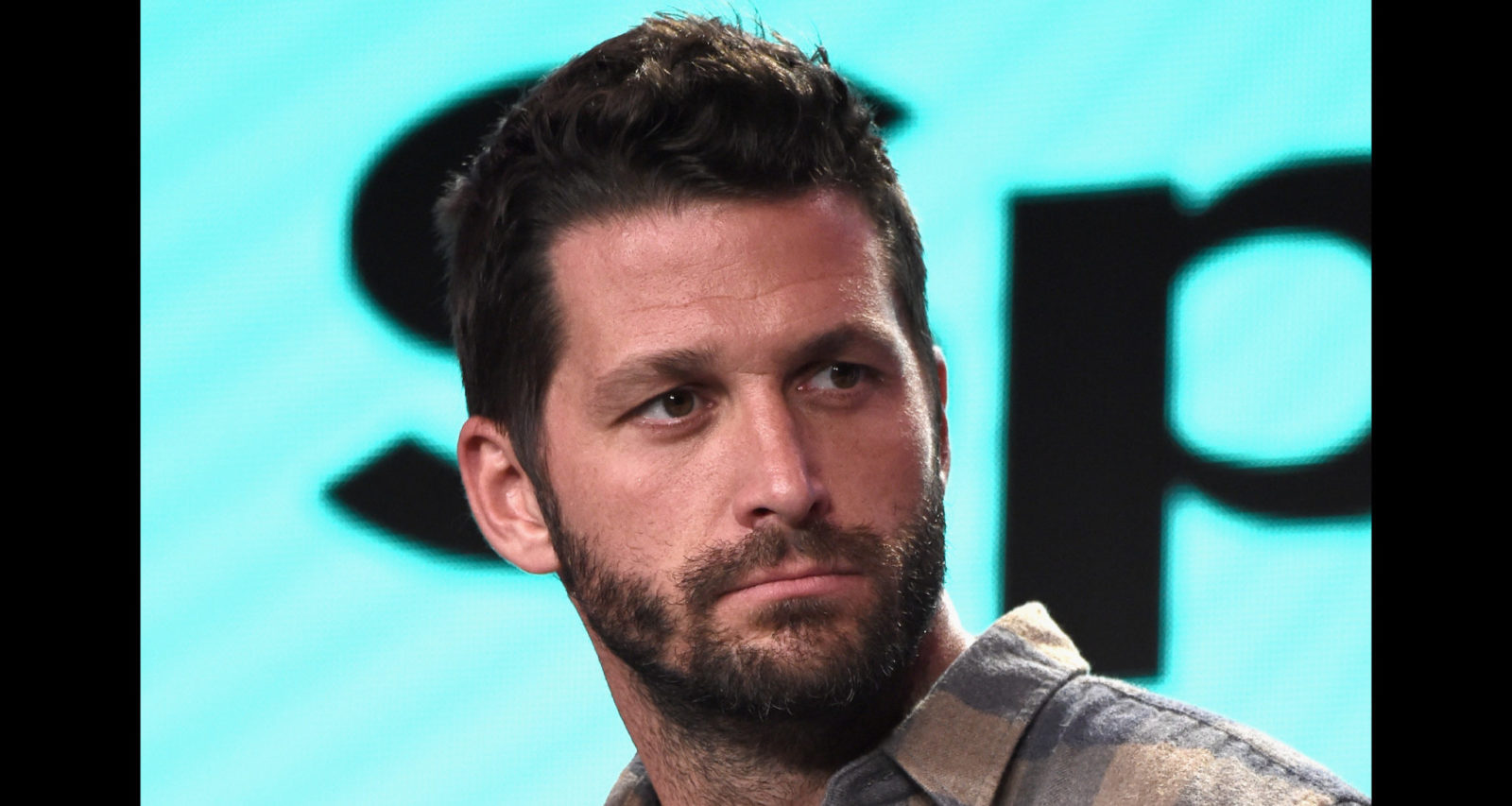 Brett Tutor of 'Trading Spaces' onstage at the Langham Hotel on January 12, 2018 in Pasadena, California. (Photo by Amanda Edwards/Getty Images for Discovery )

Trading Spaces is back on TLC with its newest carpenters. Besides former ANTM model-turned-carpenter Joanie Sprague, the show’s cast now includes Brett Tutor, too. He had a quick rise to home reno TV stardom before his debut on Trading Spaces in 2018. It’s worth tracing his journey to becoming one of the most interesting woodworkers on TV with Brett Tutor’s wiki.

Tutor Is a Native of Texas

Brett Tutor was born in September 1985 and is a native of Austin, Texas. He grew up primarily in the neighborhood of Georgetown and graduated from Georgetown High School.

He Was a Nationally Ranked Golf Player

Brett and his brother practiced BMX in their neighborhood and got into a lot of mischief together. They reportedly received truckloads of dirt on Christmas to ride their bikes on.

During his teenage years in Austin, he played competitive golf. By 12 years old, he was a world-ranked junior golfer. He also played baseball and football and was the quarterback of his high school football team.

After high school, he lived in Hawaii for a while, where he learned jiu-jitsu and Muay Thai and also briefly worked as a white water rafting and rock climbing guide in Oregon. He dropped out of junior college after two semesters and sought a life of adventure.

While his many jobs over the years and starring role in Trading Spaces have taken him all over the world, he still calls Austin his home.

Tutor’s career background is astonishingly diverse. One of his earliest professions included an enlistment in the U.S. Air Force at the age of 21.

On his first day of basic training, he was put in charge of a team of 60 men. His military career was, however, short-lived.

Basic training graduation. Although I look like I'm 10 years old, I got to train with some of the best. To this day I wish more than anything that I could have stayed injury free, but shit just happens sometimes and we don't know why. And although I got injured before I completed my program, I will never forget the guys on my team who gave up all comforts so that other may live. It was an honor and a privilege to train with such men.

He tore his Achilles tendon during the Pararescue Special Operations training and was given a medical discharge. When he returned to Austin to recuperate, Brett went to a carpentry school.

Tutor Trained in SWAT and Was a Stuntman

After his military career ended, Tutor did a few different things. He joined a SWAT school and trained to be emergency medical technician and tactical medic/SWAT.

He’s reportedly a certified EMT and also a trained mixed martial artist. All his combined training led to him working as a stuntman for films and commercials.

When he was working as a carpenter and handyman in Austin, his girlfriend at that time urged him to join an acting class with her. His acting teacher then offered him the job of stuntman in the Robert Duvall movie Seven Days in Utopia, in return for doing some carpentry work in her house.

Tutor did the work for his teacher and got the job in Seven Days in Utopia, which gave way to more stuntman gigs, including one in Cambodia. He also did some modeling and worked in commercials for Dick’s Sporting Goods, Old Spice, Jeep, Dodge Ram, and Chevrolet.

His work would also lead him to his first foray into reality TV.

Tutor Was on Discovery’s Treasure Quest

Hey everybody! Don't forget to watch Treasure Quest Snake Island tonight! I'm out of the country working in the field and will miss it so let me know what you think! @discoverychannel #treasure #treasurequest #snakeisland

He was tapped as a survival specialist and wildlife expert for the show and filmed in Argentina. Though he was no treasure hunter on the show, he certainly caught the attention of viewers—which landed him on Trading Spaces.

Even after the show completed filming, Tutor continued traveling on his own. The lifelong adventurist went to Patagonia and Mar Brava, broke his ribs during one trip, and contracted a disease that took months to cure. After filming in Cambodia, he took a trip to Bali before returning to Austin.

Tutor was something of a child prodigy who learned the home improvement trade from his grandfather Chet Tutor, a home inspector. Brett’s grandparents lived very close to them in the same neighborhood.

“My grandpa was a builder and lived across the street and would bribe me to come over with food in exchange for labor and come help him work on home renovations that he was doing and helping him do home inspections,” Brett recalled.

After high school, Tutor was his grandfather’s apprentice for a while and helped him do home inspections from the age of 15. After a globetrotting stint, he returned to Austin to establish his own home inspection business, Property Doctors Inspection.

Property Doctors does home inspections, energy audits, and rainwater and septic systems installations. The business lets Tutor use the woodworking skills he learned from his grandfather.

Tutor is experienced and licensed in the home improvement business. His work got noticed on Instagram by the Trading Spaces producer, who contacted him the same day Tutor learned Treasure Quest wouldn’t be continuing.

TLC was reviving its classic home makeover show, Trading Spaces, in 2018 and Tutor was called in to audition. He was not a big fan of the show during its original run when he was in middle school. He did, however, watch it a few times at his grandmother’s house.

Before auditioning for the revival, Brett checked out a few old episodes on YouTube and was appalled by Trading Spaces veteran Hildi Santo-Tomas’ quirky designs. Nonetheless, he went to the audition with an open mind.

He showed the TLC casting team pictures of some of his carpentry and building work. He also quickly built chemistry with Paige Davis. At the audition, he was tasked with building a shelving unit in an hour, while being filmed, too.

Tutor’s audition was obviously a success. Now he and Joanie Sprague join the Trading Spaces carpenters legacy that includes the likes of Carter Oosterhouse and Ty Pennington.

While work has taken Tutor around the country, philanthropy has taken him all over the world. The versatile handyman is also a humanitarian who has put his skills to use for the needy.

After a couple of years in Hawaii, he went to Africa with a humanitarian organization. He mostly volunteered in schools and orphanages in Kenya.

“I spent a summer in the slums of Kibera, Kenya when I was 19,” Brett said of the experience, “and that time there changed my life. Seeing kids go without basic needs will change anyone who sees it and you just want to do something that might be of service.”

That service came in the form of a nonprofit, Off The Grid International, which helps provide basic needs like clean water and sanitation systems to areas that need them. Tutor and his colleagues at Property Doctors save up money from their business to fund building sanitation systems.

They’ve worked with the Peace Corps in underdeveloped areas in Panama. There, Tutor built many structures in a remote village, including a birthing hut for women.

He’s in a Band with His Brother

Among the many feathers in his cap, Brett also bears the musician label. Together with his brother Chase Tutor, he formed the band The Tutor Brothers.

Brett and Chase have been learning and playing the guitar since at least the ninth grade. While Brett is the songwriter, Chase is the vocalist. Brett says his brother is the better singer of the two, and also auditioned for American Idol.

The brothers recorded and released their first single, “Fire Fly” in 2016. They haven’t released any new music recently, but you can check out Brett’s guitar and vocal skills on Instagram.

Brett and Chase also have a younger sister, McKinsey Tutor, whom they seemingly didn’t see much when they were kids.

Tutor is apparently single at the moment. He was previously dating the woman who got him into the stunt double business.

Before he got his big break on TV, Tutor was struggling in his personal life. His relationship with his girlfriend had just ended and his mother, Darlene Campbell, was diagnosed with cancer around the same time.

The Tutor family wasn’t exactly tight-knit when Brett was young. Brett’s parents separated when he was a child and his mother Campbell wasn’t around much during his childhood. He once reportedly ran away from home for a couple of days only to realize no one had noticed he was gone.

But the family appears to have become much closer now since Brett’s mother overcame cancer. He shares pictures of her often on Instagram. Most recently, he and his mother enjoyed a spa weekend trip. Campbell is also working in Austin as a real estate agent.

When his relationship ended and his mother was battling cancer, Brett turned his focus to his work and Off The Grid International. He decided then that the entertainment business and his music aspirations would be a way to boost his nonprofit. He found an agent who got him onto Treasure Quest and later, Trading Spaces.

He joins the ranks of Ty Pennington as the new handyman heartthrob of Trading Spaces. But what about having a family in the future?