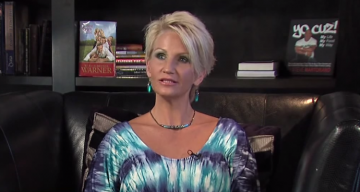 YouTube.com/Brenda Warner talks to ABC15 on family and faith

Brenda Warner’s Hall of Fame moment will come as she presents her husband, St. Louis Rams alum Kurt Warner, 46, with his Hall of Fame award. Now, Kurt Warner’s wife is getting some attention of her own and fans want to know more. If you’re interested in all the details, then here’s our Brenda Warner wiki.


She was a Marine

Brenda Warner’s age is 50 and she grew up in a small town in Iowa. The cheerleader and self- described “Jesus Freak” enlisted in the Marines so that she could pay for college herself, instead of having her parents (who died later) worry about paying for her education. While there she met Neil, her first husband. They got married and their son Zachary was born in 1989. Jesse, their daughter, was born three years after. She later married Warner in 1997, after divorcing Neil, and Warner adopted Zachary and Jesse. Warner and Brenda’s kids together are: Kade, Jada Jo, Elijah, and twins Sienna and Sierra.

Her Son Is Legally Blind

When she was married to Neil, he accidentally dropped Zachary on his head, causing blindness. It left him handicapped and partially blind, and doctors didn’t think he would have long to live. She left the Marines due to a hardship discharge in 1990. After which she was in school to be a nurse and was on food stamps. Despite the odds, her son survived and is now a resident at Treasure House, a Christian-based place for adults with disabilities.

She Didn’t Know She was Presenting

She may be sharing in one of the greatest moments of her husband’s life, but she wasn’t even sure she would until later on.

“Every time they talk on the phone, it ends with both of them in tears and loving words and it’s just precious to watch. I just assumed he was waiting for the right time for that.”

Brenda had to ask her sister, who explained to her that every inductee chooses their presenter. Kurt was waiting for the right moment, but it wasn’t to ask his former coach.

“I said, ‘Did everyone say no?’” Brenda continued with a laugh. “I just thought it was so odd that he asked me and then he went on to say all the beautiful things that you’ve heard him say, that nobody has sacrificed as much as you have and all the wonderful things that a wife would want to hear, and it just touched my heart.

“It was just one of those moments that it feels like we’ve been through so much together and most people know about the good things and we obviously remember all the highs and lows because they brought us this point.”

Brenda Got Her Own Tribute

Not only did Kurt choose her to present, but he explained why he did and touched on all the sacrifices she made.

“The bottom line is, through this entire journey, all the ups and downs, all the good and bad, there has been one person that has been with me through it all, that has sacrificed as much as I had and really allowed me, within our circumstances, to chase after my dream and may have put things on hold, took on different responsibilities that she may not have if we went in a different direction,” Kurt said.

“I just really believe that being up on the stage, it’s a part of so many different people that helped me to get there, but she’s the one that I believe deserves to share that moment with me and share that stage with me. That is why I chose Brenda to present me.”

Brenda Warner’s haircut (a mohawk) is always getting some attention, but she doesn’t have cancer (as some have speculated), she just enjoys shaving her head and has a few grey hairs. She was also mistaken for Kurt’s mother, more than once.

“It’s just hair,” she said to the Associated Press. “People make such a big deal about how I look, but I’ve had nothing done. The only thing that’s changed is my hair. And I have to have it colored every three weeks.”