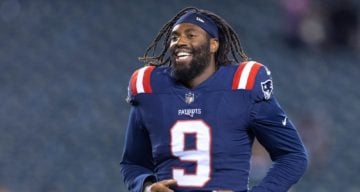 2021 has been a busy year for Matthew Judon. The linebacker signed a lucrative new contract with the New England Patriots, he welcomed a new addition to his family, and he’s staying on top of the TikTok dance trends with his family. Thanks to Matthew Judon’s wife, BreighAnn Judon, we have the footballer and his daughter entertaining TikTok users with their dances. It’s got social media users asking who Matthew Judon’s wife is. BreighAnn supported Matthew back when he was a DII athlete and not considered among top NFL prospects—before he defied the odds and rose to professional stardom. Find out about Matthew Judon’s amazing supporter, BreighAnn Judon, here.

Born BreighAnn Morgan on November 23, 1990, she hails from Michigan. She is one of six children born to Gerrie and Mark Morgan.

BreighAnn grew up in Rockford alongside her siblings, Jessica, Garrett, Kelsey, Evan, and Hannah Morgan. Their mother Gerrie is a florist with her own business in their hometown.

Louisiana native Matthew Judon wasn’t recruited by a Division I football program and attended Grand Valley State in Michigan from 2010 to 2014. Around that time, he met BreighAnn Morgan through a dating app.

Their first date flopped when Judon’s siblings showed up unannounced. But they eventually hit it off, and began dating eight months after they met. Judon and BreighAnn Morgan married in June 2018.

In 2014, Matthew Judon and BreighAnn Morgan were expecting their first child together. They welcomed their daughter named Aniyah in June 2015.

In early 2019, they were expecting their second child and Aniyah was excited to become an older sister. Sadly, BreighAnn suffered a miscarriage and the couple had the difficult task of explaining to their daughter that she wouldn’t be seeing her sibling anytime soon.

Aniyah, however, got her wish when her parents were expecting again. Her brother, Leonidas, was born on January 16, 2020. Their third child, Azayda Joy, was born on November 10, 2021.