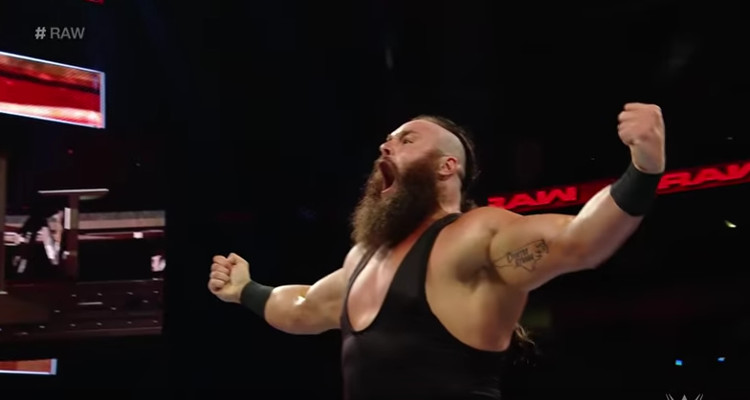 At 6’8″, Braun Strowman is a giant of a man. He was relentless against his rival, Roman Reigns on Monday night, to the point that medics were called! After Reigns was put into an ambulance, Strowman tipped the vehicle over with his bare hands. Hell hath no fury as a WWE wrestler scorned!

Braun Strowman is a professional wrestler and former strongman, currently signed to the WWE. His real name is Adam Scherr, an he is in the news because of his complete destruction of Roman Reigns in one of the greatest backstage beatdowns ever. Strowman vowed to end things with Roman Reigns, and when Reigns was being interviewed by Michael Cole about his fight against The Undertaker, Strowman began attacking Reigns. In his anger, Braun Strowman flipped the ambulance with an injured Roman Reigns inside in a brutal fight that went viral. Here are some details from Braun Strowman’s wiki.

He Started as a Strongman

Braun Strowman was born on September 6, 1983, in Sherrills Ford, North Carolina. He started his career as a strongman and earned his Strongman Corporation Professional Card by winning the NAS U.S. Amateur National Championships in November 2011. He went on to win more titles, including the 2012 Arnold Amateur Strongman Championship. Braun Strowman’s strongman competition career continued with him finishing in fifth place in the SCL-North n Championships in July 2012.

Also Read: Did The Undertaker Retire? Here’s a Look at His Age, Net Worth, Wife, & More

Strowman won his debut fight in the WWE on December 19, 2014 by defeating Chad Gable. He then became a part of the Wyatt Family alongside Bray Wyatt and Luke Harper. Strowman’s height of 6′ 8″ makes him one of biggest fighters in the WWE. He faced Roman Reigns in a few tag-team matches and has since made a rival out of Reigns. Things went too far in last night’s (April 10) episode of RAW, when Strowman brutally beat Roman Reigns backstage so badly that medics had to be called!

After Reigns was strapped to a stretcher, Strowman pushed him down a flight of stairs while he was still strapped in! Reigns was then put in an ambulance, but in a spectacular show of brute strength, Strowman lifted the ambulance with his bare hands and flipped it on its side! Strowman weighs 385-lbs, so it was hardly a fair fight between him and the much smaller Roman Reigns. Despite being so big, Braun Strowman is quick on his feet, allowing him to take his opponents down with his signature moves like the Spinebuster and the Bodyavalanche.

Strowman Has a Girlfriend

Strowman is known for his short temper and that makes him one of the most dangerous fighters in WWE. Rumor has it that Braun Strowman’s girlfriend is WWE Diva, Charlotte Flair, the daughter of famous WWE star, Rick Flair. They have been seen together in public several times, but haven’t confirmed the relationship rumors.