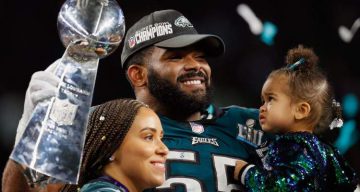 The Philadelphia Eagles won their first Super Bowl! Defensive end, Brandon Graham stole the show on Sunday with an amazing performance against the Patriots that fans will forever remember. Brandon Graham’s wife, Carlyne Graham is his biggest supporter and was cheering her husband on as he made the biggest play of the game!

Brandon Graham is the hero Philadelphia was waiting for! After he snatched a victory from Tom Brady on Sunday, everyone wants to know more about the Eagles star.

He is married to Carlyne Graham, and they are the parents of an adorable two-year-old girl, Emerson who celebrates her birthday on Monday. Now that’s what you call a perfect birthday present!

She Has Degrees in Social Work and Law

Carlyne is from Detroit, Michigan and graduated from Crockett Vocational Tech.

Her love for families in need led her to work in the public sector, and with non-profit organizations for many years. She worked as a case manager and director of social services in the Chicago area before her move to Philadelphia.

Brandon Graham and Carlyne Graham met in high school, but it wasn’t until much later that they started dating.

He spoke about their relationship saying, “It ended up not happening till I got to college. Had some courage and hit her up.”

In May 2013, the Eagles defensive end planned an incredible proposal for the love of his life. He told Carlyne to be ready for a football documentary shoot, but instead, surprised her by popping the question. The epic moment was captured on camera!

When I proposed to you, I gave you a ring. When you said Yes, you gave my life wings. Happy Anniversary Queen! #year3 #letskeepcreatingamazingmemories #teamgraham55

The couple got married in 2014 and are proud parents of a little daughter named Emerson. Last year, Carlyne spoke about Brandon enjoying his new responsibility as a father saying, “He’s very involved, even on his busy days. Even after the games, he makes sure he gives her bath. They have their bath time.”

Head over to Instagram to see more of Carlyne Graham’s pics with her family. We are totally in love with this adorable football family!

NFC CHAMPIONSHIP 2018..I’m beyond proud of this man.

Team Graham All the Way!

Along with Brandon Graham, Carlyne is the co-founder of Team Graham, a charity established by the couple to help young people build a better life. They have several initiatives in Philadelphia and Detroit throughout the year, and hold a fundraiser event every summer.

Carlyne and Emerson were with Brandon Graham as they celebrated the Eagles’ Super Bowl win on Sunday.

Brandon and Carlyne Graham’s kid was the only one who took the spotlight away from the defensive end at the media session after the game. What a beautiful start to Emerson’s birthday celebrations!

With Carlyne by his side, nothing seems impossible for the newly-crowned Super Bowl champion. She is definitely Brandon Graham’s lucky charm!