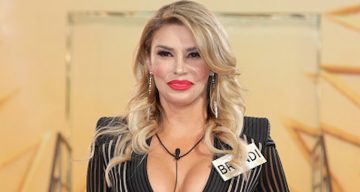 Ah, reality TV and plastic surgery. It goes together like peanut butter and jam, bacon and eggs, Batman and Robin. That’s not to say all plastic surgery is bad. But sometimes, even the good work can seem a little too good. Come on, suddenly looking 10 years younger, even if the work is good, doesn’t mean no one notices. All of this brings us to Brandi Glanville and Celebrity Big Brother. In this article, we’ll take a look at Brandi Glanville’s plastic surgery, both alleged and admitted.

Did Brandi Glanville Have Public Surgery?

In response to a question if she had surgery on her face, Glanville replied: “Oh yeah, tons.” While this statement covers her face, what about the rest of her?

A Bit of Work Done

What did Brandi Glanville have done? Through her two books as well as various interviews and television appearances, we’ve compiled a small list of plastic surgeries and procedures that Glanville admitted to.

Her face had a bit of work done. She admitted to using Botox and lip injections. She even said that these temporary fixes did not work out well on different occasions. In regards to Botox, she even said on the U.K. version of Big Brother that, “I’ve had a f******g lot.”

That being said, Glanville did not admit to any permanent surgeries on her face, and even scolded a fellow castmate when he suggested that she had plastic surgery on her face.

While Glanville may not have had surgery on her face, that isn’t true for the rest of her. She admitted to having her breasts worked on, a change that is easy to spot comparing any of Glanville’s then and now pictures. It’s not that they look overly fake or horrible, but there was a definite change.

The one Brandi Glanville surgery we are reluctant to talk about is one that she apparently had down below. Like, below the waistline. In the nether regions. And that has a story all to itself.

Revenge on an Ex

Brandi Glanville’s marriage to Eddie Cibrian ended pretty horribly. In July 2009, he was caught having an affair with country music star LeAnn Rimes, and the divorce that followed got messy. Cibrian tore up Glanville’s credit cards that they had together. He came to regret this.

Glanville had vaginal rejuvenation surgery. Given that Cibrian destroyed her credit cards and, as she would put it, destroyed her vagina (through childbirth), she thought that he should pay for the surgery. She put the entire $12,000 surgery on Cibrian’s credit card.

Due to her appearance on Celebrity Big Brother, many are wondering if Glanville had more work done on her face. She denies it. According to her, the changes are a result of weight loss, and a change in makeup that may have led to a slightly different appearance than fans may be used to.