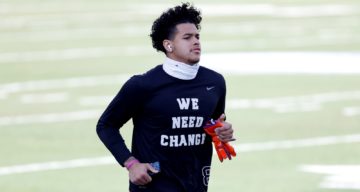 Tight end Braden Galloway #88 of the Clemson Tigers warms up before the ACC Championship game against the Notre Dame Fighting Irish at Bank of America Stadium on December 19, 2020 in Charlotte, North Carolina. (Photo by Jared C. Tilton/Getty Images)

Braden Galloway was a standout tight end for the Clemson Tigers before he graduated. And if you want to know about this young athlete outside of football, Braden Galloway’s girlfriend is the ultimate source. Mackenzie Grimsley has established herself on TikTok, YouTube, and Instagram as an entertaining, fashion-savvy lifestyle vlogger. She often features her boyfriend in her content, giving more glimpses into their relationship. And now that they are engaged, there’s anticipation for more content from both of them. To give you a glimpse of their romance, we’re revealing more in this Mackenzie Grimsley wiki.

Mackenzie Grimsley was born on October 1, 1999, hailing from Florence, South Carolina. She is one of three daughters born to Gene and Shannon Grimsley.

Her sisters, Logan Grimsley Hatfield and Caroline Grimsley, are TikTok starlets in their own right. Caroline has also made a few appearances on Mackenzie’s social media profiles. Caroline is a student at Clemson, too.

Mackenzie Grimsley is a student at Clemson University as well as a cheerleader. Outside of academics, she’s a rising social media influencer.

Braden Galloway is also a regular star in Grimsley’s social media videos. If you want to find out more about the tight end outside the gridiron, his girlfriend’s social media profiles are the place to be.

Braden Galloway and Mackenzie Grimsley have been dating for most of their college life at Clemson. After Galloway graduated early in 2021 after exhausting his eligibility, they have still been going strong.

On April 10, 2022, the TikTok star and her beau announced through their official social media that they are engaged. Here’s hoping that Grimsley shares the wedding planning process and the big day on her channels soon.