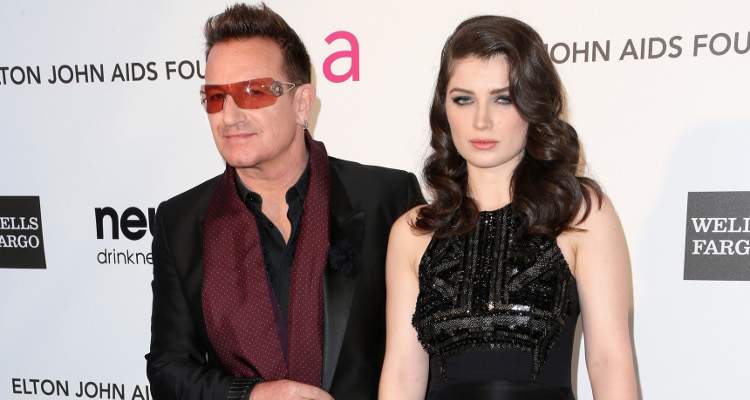 When you think of the name “Bono,” a certain world-famous band immediately comes to mind. But there’s more to the U2 frontman’s life than just music; he’s got four kids he adores more than anything. Lately, interest has risen in Bono’s daughter, Eve Hewson and for good reason! She’s stepping away from the tag of being known as “Bono’s daughter” and is making her own mark among the stars! While she’s at it, she’s been dishing on what kind of dad Bono is.

When you think of Bono, you think of the smooth, charismatic rocker from U2 with the inspiring streak of activism. What doesn’t come to mind is Paul Hewson (Bono’s real name), a stereotypical and embarrassing dad at heart. But according to Bono’s daughter, Eve Hewson, that’s exactly how he is! The beautiful Eve Hewson is blazing her own path in the acting industry. She’s shedding the “second-generation famous” label and is hoping to prove that she can make it in Hollywood, despite just being known as “Bono’s daughter.” We’ve compiled some interesting facts about Eve Hewson that you probably didn’t know, so keep reading!

Bono is basically Irish music royalty, which is no surprise! Her full name is Memphis Eve Sunny Day Hewson, and she is the second of four children born to Ali and Paul Hewson. She has an older sister, Jordan and two younger brothers, Elijah and John.

#2. She Can’t Shake Off Her Parents

After completing her education in Dublin, then 18-year-old Eve decided to move to the U.S. She was set to attend New York University’s Tisch School of the Arts. At that time, Jordan was studying at Colombia, and Bono and Ali weren’t ready to lose another kid to the U.S.

So, they conveniently decided their Dublin home needed a complete renovation and they decided to stay in the U.S. until it was done. Eve’s parents and brothers moved to a penthouse apartment they bought from Steve Jobs, while Eve lived in a dorm at school like any other student.

“I didn’t invite them; they just came,” Eve punctuated with an eye-roll. But, according to Eve, it had its perks. “I did go over after class and eat real food,” she said.

#3. Her Parents Are Great Company

Eve recalled that she was at a party once —and her mother was there, too! At first, she lamented but then, she added that her mom is “pretty cool” and the two are definitely very close. “I’d prefer to go out with her than almost anybody else.”

The same can be said about Bono! She said that her father figured out that the key to a good relationship with your kids is to be more fun than them. “My parents are way more fun than me and my siblings. We’re always like, ‘What restaurant are you going to? Whose party is that? Can we hang out with your friends?’” (Um…#parentgoals!!)

#4. Her Parents Can Also Be Embarrassing

By Eve’s own admission, Bono is the “embarrassing dad you don’t want to be seen with,” especially around school. “He used to blast the Backstreet Boys in his car in traffic on the way to school and then get out in his dressing gown and dance with his glasses on. We were just mortified. But now I think he’s a really fun dad. We tease him all the time, but he teases us back too!”

(Key takeaway: Bono dances in a dressing gown. Your dad never looked so normal, did he?)

The 26-year-old says her dad always got hers and her siblings’ opinions on his music. She said they’d be very upset if what they liked didn’t make it on the album.

Bono and his wife didn’t just get their children involved in their work, but they also got them into their active philanthropy.

“Both of my parents were good about involving us in whatever they were doing and we were definitely around when One (Bono’s campaign organization to fight global poverty) and Edun (the ethical clothing line founded by Ali) started. That’s been great in helping me develop my taste and opinions,” she said.

Music was never Eve’s calling. She has been in love with movies since she first saw E.T. Her ultimate goal was to work with Steven Spielberg.

She made her acting debut in the 2005 flick, Lost and Found with Jordan. Her breakout role came in the Steven Soderbergh TV series, The Knick. She also went on to star alongside Tom Hanks in Bridge of Spies. In fact, Eve is actually a graduate of the prestigious NYFA (New York Film Academy) Film Camp! The skills she learned at NYFA helped her land a few notable roles, one alongside Sean Penn and Frances McDormand in This Must Be the Place. She then landed the lead role in a popular Cinemax series called The Knick, which ran from 2014-2015.

She’s creating a buzz in 2018 starring in the upcoming retelling of Robin Hood, alongside Jamie Foxx and Taron Egerton.


Eve sadly did not inherit Bono’s singing skills but she was certainly a source of inspiration.

“People assume that I’ll be able to sing, and then are wildly disappointed when they hear me,” she said. She can enjoy a good karaoke session, but is a self-admitted terrible singer. Nevertheless, she’s U2’s biggest fan, having listened to all of their songs and attended their concerts.

Though she won’t be joining her dad on stage anytime soon, she certainly supports his music. According to her website, the U2 song “Kites” was inspired by her and her sister.

The song was written about a time Bono, Eve, and Jordan flew a kite at Killiney Hill in Dublin. The outing didn’t go as planned when the kite crashed and one of the girls wanted to go home and play video games.

When Eve moved to the U.S., Ireland followed her to Brooklyn! (We’re not just talking about the rest of the Hewson brood relocating to New York, either). Eve’s residence was across the street from an Irish bar (and if there’s one thing we know about the Irish, it’s that they can drink!)

“It’s the bane of my life,” she remarked probably about the bar. One time, a brawl broke out and she broke it up the exact way any Irishman would stop a brawl at an Irish pub; by yelling “Shut the fook up!” from her balcony. Worked like a charm!