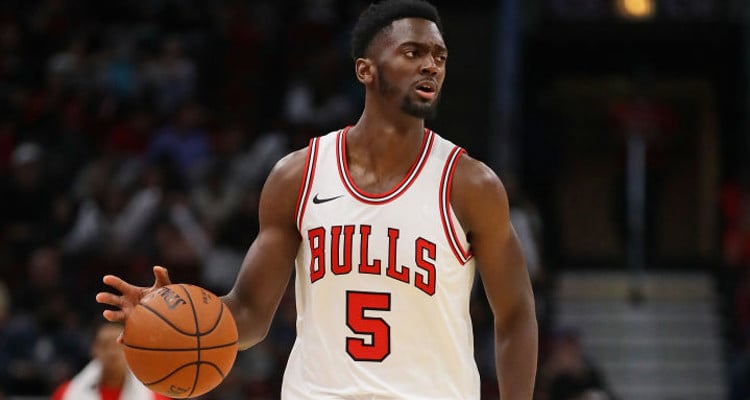 The Chicago Bulls are in the news yet again. This time, it’s not for the team’s performance but because of its players, Bobby Portis and Nikola Mirotic. They engaged in a physical altercation that led to Mirotic being hospitalized and sidelined indefinitely.

Lately, the news is full of snippets from the “Bulls Fight.” Yes, we’re referring to the fight between Chicago Bulls’ players Nikola Mirotic and Bobby Portis during practice on Tuesday, October 17, 2017.

Mirotic was rushed to the hospital after their altercation ended with an alleged punch from Portis on his face. Currently undergoing tests, Mirotic is expected to be out for the foreseeable future.

Mirotic, who is 26 years old, was in his fourth NBA season and was expected to be the starting power forward for Bulls. The six-foot, 10-inch sharpshooter had signed a two-year, $27.0 million contract to return to Chicago in free agency before the season.

Read on to know more about the player who punched Nikola Mirotic in the face in Bobby Portis’ wiki.

Born on February 10, 1995, Bobby Portis’ age is 22. He plays basketball professionally for the Chicago Bulls in the National Basketball Association (NBA). He played college basketball for the Arkansas Razorbacks, and in the 2015 NBA draft, he was drafted the 22nd overall pick up by the Bulls.

In his early days, Portis played basketball at Hall High School in Little Rock. He was named Mr. Basketball of Arkansas in 2013 and earned McDonald’s and Parade All-American recognition.

Portis became the first in-state McDonald’s All-American to sign with the Razorbacks since Corliss Williamson in 1992. He was also considered a key recruit for coach Mike Anderson’s rebuild of the program.

Bobby Portis’ college career took him further ahead as a player. He was named to the Southeastern Conference All-Freshman team and second-team All-SEC. Portis averaged 12.3 points, 6.8 rebounds, and 1.6 blocks per game as a freshman. He was named to the preseason All-SEC team and led the Razorbacks to a top 25 ranking during his sophomore year.

His career took a turn for the better when on March 10, 2015, he was selected as the SEC Player of the Year by the league’s coaches. This marked the first time an Arkansas Razorback was selected since Corliss Williamson won the award back in 1993-1994.

During the 2014-2015 season, Portis was considered one of the top players in college basketball and a likely first-round pick in the 2015 NBA draft.

As you can see, Bobby Portis has been a consistent and great player. Let’s hope this controversy doesn’t take a toll on his career.