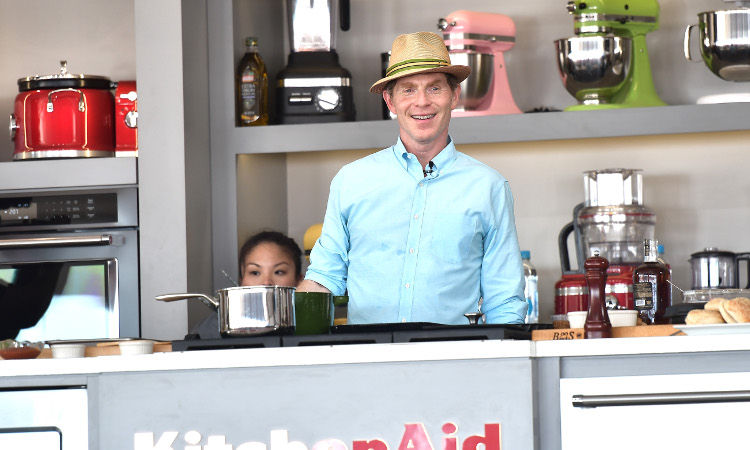 If you don’t know who Bobby Flay is, you need to ditch that diet and start watching the Food Network! Professional chefs always aim to beat him on TV, but it’s not as easy as it looks. Bobby Flay’s culinary empire has earned him a net worth of $30.0 million. We’ve got all the details.

The Food Network makes us want to run up to a Bobby Flay restaurant and start ordering one of everything off the menu! Beat Bobby Flay is the hottest show on the network with mind blowing professional chefs doing everything they can to beat Iron Chef, Bobby Flay. But the celebrity chef is not easily defeated. Has Bobby Flay ever lost? He has, a few times in fact. But it makes Flay and the competition even tougher to beat. Here’s what you need to know about the Iron Chef in Bobby Flay’s wiki.

#1. He Revolutionized a Childhood Toy

When eight-year-old Robert Flay lived with his parents, Bill and Dorothy Flay, in Manhattan’s Upper East Side, the Hasbro easy-bake oven was the hottest-selling item among girls. The easy-bake oven was later criticized for the ultimate genderization of toys. But these days, it’s popular among both boys and girls.

Back then, a young Bobby, who was attracted to the culinary arts, asked his parents to buy him an easy-bake oven for Christmas. Bill Flay disapproved, feeling that a G.I. Joe was more appropriate for boys. He received both toys, but the oven won big. Years later, Hasbro made its toy oven into a working one which could actually cook, and it was popular with both boys and girls. They also released a cookbook with recipes contributed by chefs such as Bobby Flay. Bet his dad was glad he got that oven now!

A 17-year-old Bobby Flay dropped out of school to pursue his dream. He said his first job in the industry was working at a pizza parlor and a Baskin-Robbins. His father, who was a partner at the famed Joe Allen restaurant in Manhattan’s Theater District, then got him a job making salads there. Joe Allen himself was so impressed by Bobby’s kitchen talents that he sponsored his tuition at the French Culinary Institute.

After graduating, he worked at Brighton Grill on Third Avenue where he became executive chef in a week. But he quit realizing he was not yet ready for the responsibility and joined Bud and Jams where Jonathan Waxman introduced him to Southwestern and Cajun flavors.

His Southwestern cuisine made him famous and Flay soon found himself as executive chef and partner of the famed Mesa Grill. He opened Bolo Bar & Restaurant a few blocks from Mesa and a second Mesa in Las Vegas which earned him his only Michelin star.

He went on to open Bar Americain, Bobby Flay Steak, Bobby’s Burger Palace, and Gato to rave reviews from the press including the very tough food critics of The New York Times. With his restaurants, cookbooks and shows —including the 14 on the Food Network alone— he’s earned a net worth of $30.0 million. He also encourages the culinary arts by giving out an annual scholarship to the French Culinary Institute. Flay won several accolades including a star on the Hollywood Walk of Fame.

Besides food, Flay has other interests like thoroughbred horse racing. In fact, he’s the owner of more than one graded stakes race winner. One of his thoroughbreds, More Than Real, won the prestigious Breeders Cup Juvenile Fillies Turf in 2010. Flay is part owner of Creator who won the third jewel of the triple crown at the Belmont stakes. He’s a member of Breeders’ Cup Board of Directors and was almost elected chairman once.

The 52-year-old recently debuted as an NBC sports analyst. But he didn’t cover NFL or MLB. Flay was at Saratoga covering the Whitney Stakes where he developed a passion for the sport. His grandfather took him to Saratoga when he was a kid and he fell in love with it, “You can get very close to the horses no matter who you are. You can get very close to the jockeys no matter who you are. It gives you a very intimate look into a sport that’s always in some ways been sort of a little hard to get close to.”

What better way to kick off Derby Day than to cook a giant brunch at @21chotels in Louisville with @sentientjet? ..looking forward to a great day of racing ahead! #KentuckyDerby143

The culinary genius’ romantic life has been a hit and a miss. He first married Debra Ponzek, another chef in New York in 1991. But they divorced two years later. In 1995, he married Kate Connelly, who co-hosted Robin Leach Talking Food on the Food Network.

She was a single mother of an eight-year-old boy when Flay was a guest on the show. Love bloomed after their first meeting and in a short courtship, they were engaged. Their small wedding was held in Flay’s Bolo with dishes served from the menu. She gave birth to their daughter (Flay’s only child, though he was stepfather to Connelly’s son) Sophie. Flay and Connelly separated in 1998 and eventually divorced.

Sophie appears to be close to her father. The 21-year-old is a student at USC. She travels the world with him and regularly posts pictures with her father on Instagram. And she inherited some of her father’s traits as is obvious from her appearances on his many shows.

Flay’s last and longest marriage was in 2005. He married Stephanie March, the actress who plays Alexander Cabot in the Law and Order franchise. They were together for 14 years and married for 10, but all was not as it seemed. March filed for divorce in 2015 after he allegedly cheated on her with a staff member from Bar Americain.

Their divorce was ugly with the stress getting to March. She was lambasted by a judge for demanding she be paid for her brief appearances in his shows. March also said in an interview that, in a moment of poor judgment, she underwent breast augmentation to feel good about herself. But she was allergic to the implants and had to get them removed.

March has since moved on from her divorce and so has Flay. He reportedly began dating Masters of Sex actress, Helene Yorke. They were spotted on dates looking absolutely smitten with each other. Flay confirmed his relationship with the 32-year-old on his show, Beat Bobby Flay. She was a guest judge on an episode, and they commemorated a year of dating.

“So I’m going to let you in on a little secret,” he said on the show, “Last season I went to a Knick game and I met Helene. Now we kind of date.” Yorke even made a separate Instagram account “The Hungriest Girlfriend” along with her personal account where she posts about their food escapades together.