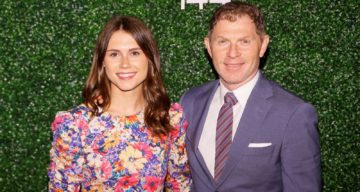 Sophie Flay and Bobby Flay at Pimlico Race Track on May 18, 2019 in Baltimore, Maryland. (Photo by Paul Morigi/Getty Images for The Stronach Group)

Celebrity chef Bobby Flay has a new feather in his hat: podcast host. But the best part of his podcast, Always Hungry, is that he co-hosts it with his daughter, Sophie Flay. Bobby Flay’s only child chose to follow his footsteps into the media world instead of the culinary industry. But this father and daughter’s dynamic is the cutest. When Bobby and Sophie share life experiences and stories while cooking together, we get more insight into their relationship. It has many fans wanting to know more about who Bobby Flay’s daughter is and what she does for a living. We reveal all the details about the celebrity chef’s scion in Sophie Flay’s wiki.

Sophie has an older brother named Jonathan from her mother Connelly’s previous relationship.

Sophie and Bobby appeared on TV together for the first time on The Rachael Ray Show when she was 17 years old, and spoke about what it was like to live with an Iron Chef for a father.

Sophie loves food (not surprisingly!) and everything about it, including making and decorating it. He father once said, “She’s really interested in food, loves to eat food, loves to go to restaurants, will try anything. I just thought it was kind of fun that she wanted to teach me how to make a dish or two.”

Sophie studied broadcast journalism at the University of Southern California. At USC, she was part of an acapella group, worked for the campus broadcast stations, and was active in her sorority’s events.

Before Sophie had earned her bachelor’s degree in 2018, she had gained experience through multiple internships. She interned at BeccaPR, NBC News, Dash Radio, Warner Bros., and NBC Sports with the Olympics team.

If you are a regular user of Spotify, chances are you heard Sophie’s voice telling you to switch to premium. She recorded these Spotify ads as a voice track artist from 2016 to 2018.

Since graduating from college, Sophie has been based in California. She began her career at ABC7 as a digital news intern in Glendale. She is currently based in Los Angeles as a community journalist under the Walt Disney Company banner.

Bobby and Sophie co-host a weekly podcast, Always Hungry, on iHeartRadio. The chef especially loves that he gets to spend time with his daughter as they share life experiences on the show.

Sophie Flay keeps a tight lip about her personal life, including her relationship history. Her social media activity doesn’t explicitly reveal whether she is in a relationship, though she shares many photos of herself with close friends.