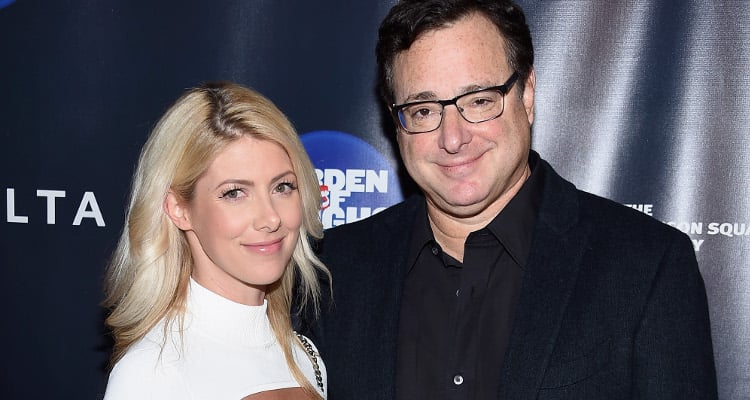 Full House star, Bob Saget got engaged to his girlfriend of two years, Kelly Rizzo, on Tuesday and now, social media is buzzing with the announcement! Rizzo is a Chicago girl who gained fame with her blog and web show, Eat, Travel, Rock TV. The newly engaged couple took to Instagram to share their happy news with the world. We’ve got all you need to know about her here!

There is a new leading lady in Full House actor Bob Saget’s life, and her name is Kelly Rizzo. Bob Saget and Kelly Rizzo are now engaged after the 61-year-old proposed to the travel blogger on Tuesday. He later shared his excitement on Instagram with a photo of the couple enjoying dinner with their friends, George Shapiro and Katie Killean.

So, who is Kelly Rizzo? Keep reading to know everything about Bob Saget’s fiancée in our Kelly Rizzo wiki.

The Girl from the Windy City

She rose to fame with the blog, Eat, Travel, Rock, which was later developed into a web series that is now featured on The Food Channel’s website.

Who needs some Fabulous Fall Cocktail inspo!? ?I have a couple great recipes for you on the Blog today! As a foodie, @fernetbranca has been my go-to digestif for years- but now I finally decided to use this incredible Italian amaro in some cocktails. Check them out as they will be a huge hit for your next fall get together ? ?<Direct link in profile> #fernetbranca. ?: @kristinriz

Rizzo’s family has a real estate business, which she joined after college. But she knew it wasn’t the career she wanted. That’s when the dream of Eat, Travel, Rock began.

She is a popular face on Chicago’s entertainment scene hosting shows for NBC5 Chicago and VH1. She also hosts Rocking Right Now on a Chicago radio station.

Country music fans may remember Rizzo from the music video for “Get Your Shine On” by Florida Georgia Line.

Kelly Rizzo and Bob Saget first met in 2015 through a mutual friend, and it seems like they immediately hit it off. He shared that he thought he would not find love again after his divorce from Sherri Kramer, whom he was married to for 15 years. Saget also revealed that his three adult daughters love Rizzo.

Love the people in this picture. The most loving and legendary @George_Shapiro Katie Killean & of course my gal Kelly. In case you’re wondering, we were celebrating our engagement— and I know George and I will be very happy together.

The actor and the blogger may have an age difference of 23 years, but they don’t seem to mind. Their mutual interests include travel and listening to music by John Mayer, who they are friends with.

How did I suddenly show up in Rio with my GF and my BFF for his birthday! Happy Birthday John!

The couple also have several other friends in common, including Full House actor John Stamos and his fiancée Caitlin McHugh, who got engaged in October. The couple often takes to Instagram to post their adventures together.

Rizzo, glowing from her recent engagement, showed off her giant diamond ring in an Instagram post while eating an oyster.

The caption read, “Who needs pearls??? Enjoying my favorite food with my new favorite accessory.”

Who needs pearls??? Enjoying my favorite food with my new favorite accessory. ??

Kelly Rizzo’s series Eat, Travel, Rock made her a celebrity as she began her journey of sharing her adventures with food, travel, music, and more across America and the world. Her blog, which was published before the web show came out, has beautiful pictures of exotic locations and gourmet food.

Rizzo was crowned “Travel Queen” by Michigan Avenue Magazine. In an interview published for their Spring 2017 issue, she revealed that her favorite city outside Chicago is Zermatt, Switzerland, which is nestled in the Swiss Alps.

“It’s the only place you can ski and snowboard 365 days a year,” said Rizzo.

Kelly Rizzo’s Instagram account is one to follow for the latest updates on the hottest travel destinations, delicious food, and rocking music. She has over 45,000 followers, and her feed is what most people can only dream of!

In addition to all her mesmerizing travel and food stories, Kelly Rizzo’s hot pics are all over her Instagram page. From surfing in Rio De Janeiro, to spending time by the turquoise waters of Sicily, she does it all effortlessly!

This. Is. Sicily. ?? Standing atop the white salt mountain of La Scalia Dei Turchi…gazing at the most turquoise water I've ever seen……………… ? @ellejayswim ?: @alexandradibella #sicily #sicilia

There are no details yet as to when Bob Saget and Kelly Rizzo’s wedding will be. But, we’re pretty sure it is going to be a Full House!