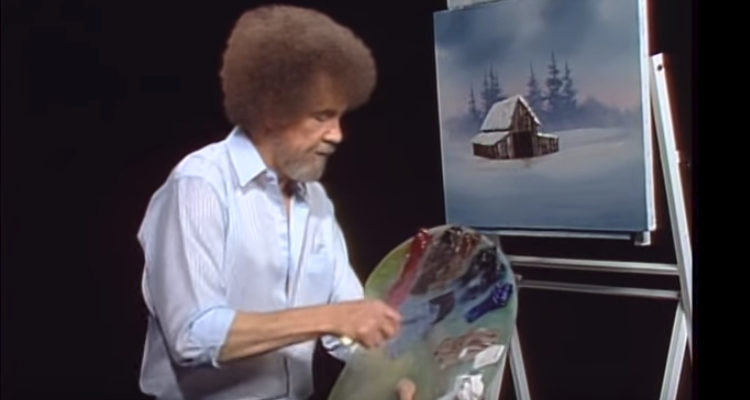 What do late painter Bob Ross and Deadpool 2 have in common? Absolutely nothing —that was until the new movie trailer recently surfaced! While fans are familiar with Ryan Reynolds’ Marvel character, they may be a bit young to know why the painting parody is being used. With our Bob Ross wiki, you can find out more about Bob Ross’ death and his famous paintings.

Who is Bob Ross?

Bob Ross was born Robert Norman Ross on October 29, 1942, in Daytona Beach, Florida. He was raised in Orlando, Florida and dropped out of school when he was in ninth grade to serve in the U.S. Air Force. While he was stationed in Alaska, he took up painting, discovered that he was good at it, and became “hooked” —a catchphrase he often used as a painting instructor.

What started out as a hobby eventually became a successful career for the young painter. He went to different art schools and became famous for the “wet on wet” technique from William Alexander, who also became his rival. The technique applies oil paints directly on top of each other to create paintings in less than an hour. He later taught this to his friends and colleagues, which resulted in his successful ‘80s TV show, The Joy of Painting, on PBS. Many still remember painting along with him after school and showing their parents the finished products. On the show, he became known for his soothing voice, his large Afro, and bearded smile. The show aired in 1983 and ran for more than a decade, thanks to millions of viewers who watched it daily. The show was syndicated and was broadcasted to more than 275 stations, eventually turning into videos and how-to-painting guides for beginners.

Bob Ross’ Cause of Death

Ross’ show was canceled in 1994 in order for the famous TV painter to focus on his health issues. He was diagnosed with lymphoma at that time and died at age 52 on July 4, 1, 95 in New Smyrna Beach, Florida. His paintings were donated to PBS stations and he is still considered one of the most famous and highest-paid painters in the country. He was married twice in the ‘80s and Bob Ross’ sons are Bob Jr., Steven, and Morgan. He still has an active fan base online, full of Bob Ross memes and Bob Ross quotes.

Bob Ross and the Deadpool 2 Trailer

In yet another Deadpool 2 teaser, fans of the hit movie franchise saw the comedic mercenary don an Afro wig, casual shirt, and a canvass. In typical Deadpool fashion, the segment was filled with NSFW language, all while using a Bob Ross-style tone of voice. The finished product is a Thanksgiving dinner picture of the main characters in the upcoming sequel. The clip is followed by the real trailer, which looks like nothing short of another action-packed hit! Will it top the sequel? Maybe. But fans are just happy to get a longer trailer starring Ryan Reynolds.

I cooked this entire turkey using only a Zippo lighter.

The official plot synopsis reads: “After surviving a near-fatal bovine attack, a disfigured cafeteria chef (Wade Wilson) struggles to fulfill his dream of becoming Mayberry’s hottest bartender while also learning to cope with his lost sense of taste. Searching to regain his spice for life, as well as a flux capacitor, Wade must battle ninjas, the yakuza, and a pack of sexually aggressive canines, as he journeys around the world to discover the importance of family, friendship, and flavor – finding a new taste for adventure and earning the coveted coffee mug title of World’s Best Lover.”

The film is being called Untitled Deadpool Sequel by Fox in its press release and will reportedly be released on June 1, 2018. Check out the hilarious homage to Bob Ross below in the exciting new trailer!