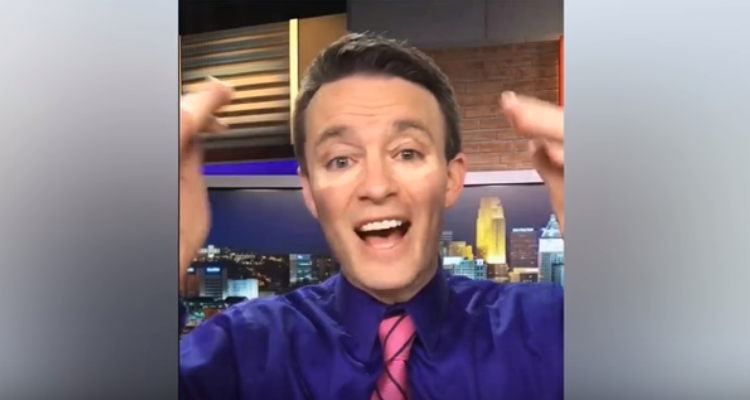 Don’t you hate when you accidentally break your bronzer? Many on social media are talking about Cincinnati news anchor Bob Herzog and his hysterical makeup tutorials on Facebook! His videos have garnered a massive following and viewers are always reaching out to him. Our Bob Herzog wiki has everything you need to know about the anchor who is “slaying” his own makeup tutorials before going on air!

Who Is Bob Herzog?

According to his profile, the 43-year-old is an anchor on the Local 12 morning show, Good Morning Cincinnati, with John Lomax and Sheila Gray.

As for Bob Herzog’s family, he lives in Cincinnati with his wife and four kids. When he’s not on the air (or learning new makeup techniques), his enjoys basketball, music, and movies.

Herzog graduated from Oak Hills High School, Xavier University, and Chase College of Law at North Kentucky University. He joined the Local 12 team back in 2005 and has been brightening everyone’s mornings ever since.

“Wake Up and Makeup!”

While most people think news anchors lack personality on air, many would disagree when it comes to Bob Herzog! It’s hard not to smile when you see his segments!

If you watch Herzog’s live Facebook videos, then you’re guaranteed to have a better morning—after peeling yourself out of bed, of course. While most people are used to their go-to beauty vloggers for the best makeup tips, his was a bit different.

Herzog has been posting “Wake up and makeup!” videos on his Facebook page since last year. But this time, he applies it himself as he was late for work!

The rush Herzog is in combined with his lack of actual knowledge on how to apply makeup makes for one seriously funny video. He filmed the video for Facebook Live (and didn’t even stop as he covered the news) and the video has since gone viral!

“This was just a way to try to make folks smile. I started it at the beginning of the year and didn’t even do my makeup in the videos until last week — it was just me jabbering. Now I jabber, and contour,” Herzog told Today.

(Clearly, some budget cuts were made somewhere, and it looks like Herzog is on his own for makeup now!)

Bob Herzog’s makeup tutorials often walk his viewers through the process while he adds his own sense of humor. (It’s equally funny because any woman watching these videos can see he has absolutely no clue what he’s doing!)

“This, as I understand it, is called concealer. It is for concealing things, like the ridiculous circles under my eyes. I can’t fill in the divots in my forehead; they are far too deep,” Herzog quips.

The news anchor also calls himself a “violent blender” as he’s readying himself for his segment, trying to apply his bronzer as fast as humanly possible! (This is also when the unthinkable happens, and his bronzer falls to the floor and smashes—a mere 10 seconds before he’s to go on air live!) The aggressive blending, mixed with the quickest contouring we may have ever seen, will have anyone watching this video in stitches!

But we can’t say we blame Herzog, since he was already late and had to be on air in only a few minutes. And anyone who has seen the video would instantly realize why he has a loyal fan base and it almost makes you want to wake up at 4:00 a.m. to watch him—almost.

While many think that putting on makeup is an easy job, Herzog has learned that there’s more to it than most people realize!

“Not only has my respect gone up for those who actually know how to do their makeup, but I’m floored by the vastness of makeup nation,” he said.

Herzog’s relatable personality on camera is what makes him so enjoyable to watch, and we’re sure that he will make another viral video in no time. By then, he may have mastered this makeup thing altogether!

Check out one of Bob Herzog’s hilarious videos below!