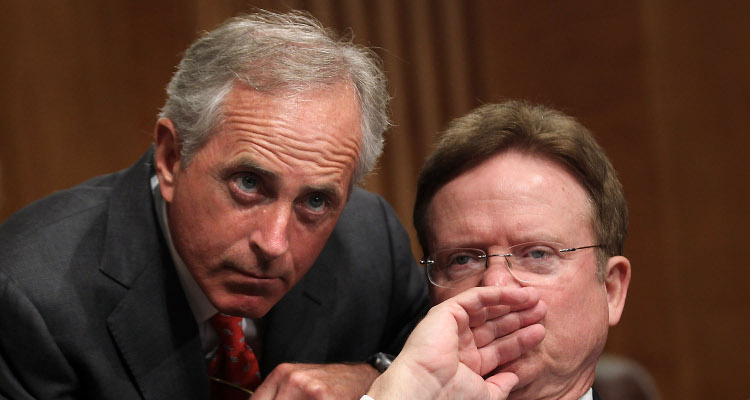 Bob Corker’s Donald Trump rebuke has sparked some tension at the White House, and people are wondering what might happen next? If you are among those, then you are in the right place to know everything about Senator Bob Corker’s wiki, and what he meant when he said Donald Trump was running the White House like an “adult day care.”

The Senator from Tennessee has put out some disappointing statements about the Trump administration, and it might be rightly so as Bob Corker has an approval rating of 52% as of July this year, according to Morning Consult. However, before we get into the details of what Corker said, and how it would affect the administration, take a look at Bob Corker’s wiki and net worth.

Robert Phillips Corker Jr. was born on August 25, 1952, in Orangeburg, South Carolina making his age 65. He was born to parents Jean J. and Robert Philips Corker and his family moved to Tennessee when he was a kid, and Corker’s a true blue Tennesseean since.

He went to Chattanooga High School and then to the University of Tennessee, where he graduated with a bachelor’s degree in industrial management. Did you know that Bill Haslam’s (current Governor of Tennessee) brother Jimmy Haslam was also a member of the same Sigma Chi fraternity like Bob Corker?

Bob Corker has had a very industrious childhood, as he began working since he was 13. His first job was to collect and bag ice and trash and later a construction worker. Bob Corker graduated from college in 1974, and he was a construction superintendent till 1978. It was a great time for Corker financially as he could save up to $8000 which helped him set up Bencor, his construction company, in 1978. The company was a success through the 80s with contracts by Krystal restaurants and clients alike, and when it peaked Corker saw an opportunity to sell it off. Corker sold Bencor in 1990 and nine years later, was the owner of Osborne Building Corporation and Stone Fort Land Company which are large real estate companies in Chattanooga.

Corker, in his twenties, visited Haiti on a mission trip, which inspired him to become socially conscious. He returned and helped a non-profit organization Chattanooga Neighborhood Enterprise to raise funds to provide affordable low-interest homes.

Bob Corker’s wife is Elizabeth Corker; the couple married in 1987, and have two daughters, Julia and Emily Corker. Though there is nothing much known about Bob Corker’s family, we do know that Julia Corker is married to Justin Spickard, and they have a son.

Three months into Trump’s administration, the Corkers were seen at the White House during the Easter Egg event with their grandson, having a great time.

We had a wonderful time with our grandson at the @whitehouse #EasterEggRoll this morning. Thanks for the warm welcome, @realdonaldtrump and @FLOTUS.

Bob Corker made it to the Entrepreneurial Hal of Fame of the University of Chattanooga in 2005 for his achievements in the business world. Both of Bob Corker’s real estate companies were doing well when he decided to sell them in 2006 to Henry Luken, a businessman from Chattanooga.

How Did Bob Corker Join Politics?

Corker was 42 years old when he took his first step towards politics. In 1994, he ran for United States Senate but lost to Bill Frist by coming in second behind him. During this time, Corker was appointed as the Commissioner of Finance and Administration of Tennessee, when he worked for Governor Don Sundquist.

Corker saw success in politics in 2001 when he was appointed as Mayor of Chattanooga till 2005. During his office, he implemented a lot of policies that include bonus system for teachers, a collaboration of departments that saw a significant decrease in the crime rate, and the improvement of the Enterprise South Industrial Park.

Bob Corker as the Mayor of Chattanooga raised $120 million for a riverfront renovation project which he oversaw along with the expansion of Chattanooga’s River Walk.

Bob Corker swore in as Senator after Bill Frist had announced that he would not be running for the re-elections, and in 2007 he won the seat. He was the only non-incumbent Republican to have been elected to the U.S. Senate to the 110th Congress.

Bob Corker won the re-election in 2012 against Mark E. Clayton. Since the re-election, Bob Corker became the member of the Senate Capital Committee on Aging, opposed limits on credit card fees, and was one of three members of the New START (New Strategic Arms Reduction Treaty) in 2010.

Spent the morning at Fort Campbell discussing the important work being carried out by our men and women in uniform.

Bob Corker has announced his retirement in 2018, and will not run for the re-election next year, bringing a good term to an end. Bob Corker has always been on the well-to-do side of the economy, and his net worth is an estimated $50 million according to CBS News.

Why Did Bob Corker Say That Donald Trump Was running The White House Like an Adult Day Care?

In an interview on Sunday, October 8, 2017, Bob Corker was clear when he reportedly said that Trump was “treating his job like a reality show.” Donald Trump took to Twitter to reply to the brash comment and said that Corker had begged him [Trump] to endorse him for re-election, but Trump denied.

Senator Bob Corker "begged" me to endorse him for re-election in Tennessee. I said "NO" and he dropped out (said he could not win without…

..my endorsement). He also wanted to be Secretary of State, I said "NO THANKS." He is also largely responsible for the horrendous Iran Deal!

…Hence, I would fully expect Corker to be a negative voice and stand in the way of our great agenda. Didn't have the guts to run!

This has also led Trump to point out that Corker had given them an Iran deal, and the rest of the things like tax reforms requires people who can do the job. Bob Corker even said that if things went on the same way Trump would lead the USA “on the path to World War III.”

It's a shame the White House has become an adult day care center. Someone obviously missed their shift this morning.

The above is what looks like a reply to Trump’s comments. Corker’s support is of high priority to Trump as of now because he needs to pass the Tax Reforms bill. This is reportedly considered as the best shot of reaching a legislative mark this year.