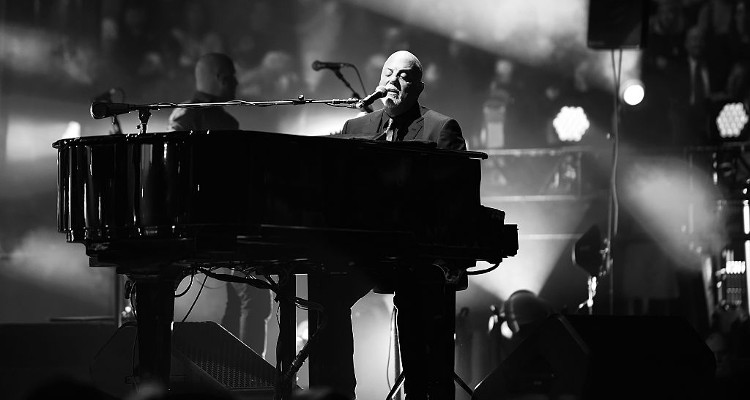 Billy Joel’s net worth stands strong at $180.0 million. It looks like the “Uptown Girl” singer is securing a future for his children.

Joel was so passionate about music that he joined his first band, The Echoes, at the young age of 14. But, he decided to go solo in 1972 and signed his first recording contract that same year with Paramount Records.

The following year, Joel switched over to Columbia Records. One of his songs, “Piano Man,” was a major hit in the mid-’70s.

Some famous Billy Joel songs include “Say Goodbye to Hollywood,” “Only the Good Die Young,” “She’s Always a Woman,” “Just the Way You Are,” and “Uptown Girl.”

Joel has also won numerous awards and received many nominations. He is a member of the Songwriter Hall of Fame and the Rock and Roll Hall of Fame.

Although Billy Joel tours and plays songs from all eras, he decided to retire from recording songs in 1993.

Billy talks about his connection to Oyster Bay Long Island & the Baymen of Oyster Bay Harbor. Watch the video now at BillyJoel.com!

Birth of a Pianist

Billy Joel returned to Hicksville High School to give a speech at the school’s commencement. Visit BillyJoe.com to watch.

He was born William Martin Joel on May 9, 1949, in The Bronx, New York City. But, he was raised in a Levitt house in Hicksville, New York.

Joel was born to Howard Joel, who was a classical pianist born in Germany. Joel’s father first moved to Switzerland then to the United States because of Nazi prevalence in Germany. His mother Rosalind was from Brooklyn.

In 1957, Joel’s parents got divorced. He has a sister, Judith, and a half-brother, Alexander Joel.

When Joel was very young, his mother convinced him to take up piano lessons. Some of his teachers were American pianist Morton Estrin and musician Timothy Ford.

Besides learning piano, Joel also took up boxing so that he could protect himself. He continued with boxing for a short time but dropped the sport when he broke his nose in a boxing match.

Although Joel went to Hicksville High School, he didn’t graduate because he was helping his mother make ends meet by playing piano at a bar. As a result, his attendance at school suffered, and he even missed out on an important English exam because he was playing piano until the late night a day before his exam.

Instead of attending a summer school to get a diploma degree, Joel decided to pursue his career in music. But after 25 years, Joel submitted essays and was given his diploma at Hicksville High School’s annual graduation ceremony in 1992.

Joel’s personal life is no less than a movie script. He started dating Elizabeth Weber Small, the wife of his music partner, Jon Small. When their relationship was exposed, Elizabeth decided to end her relationship with both.

Upset about what happened, Joel overdosed on Nembutal and called Elizabeth to apologize. She then went to the house and got Joel treated.

On September 5, 1973, Billy Joel and Elizabeth Small walked down the aisle. She became not only his wife but also his manager. However, their marriage resulted in a divorce in 1982.

His second marriage was with Christie Brinkley in March 1985. Brinkley and Joel’s daughter, Alexa Ray Joel was born on December 29, 1985. However, after nine years of blissful marriage, Joel and Brinkley’s marital union came to an end when they got divorced on August 26, 1994.

On July 4, 2015, Joel exchanged vows for the fourth time with Alexis Roderick, who is an equestrian and former Morgan Stanley executive. Joel and Roderick’s daughter Della Rose Joel was born on August 2015.

Recently, Billy Joel revealed that his wife is pregnant with the couple’s second child, and his third kid. Her due date is set to be next month. Joel, who is 68 years old now, hopes that their new bundle of joy will sleep through the night.