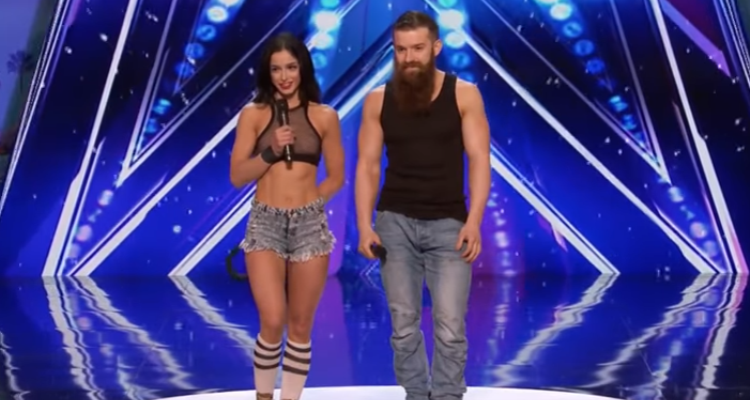 “Being here is, like, really scary, but it’s really, really thrilling,” said Cox. “The great thing about this show, and about life, is that you have to hold on to your dreams. People have told me that I cannot have my dreams, but you can have them. Do not ever give up on your dreams.” Her words of encouragement on tonight’s show will leave you inspired. As a guest judge on the show tonight, it’s been reported that Laverne Cox is so impressed by one of the acts, that she uses the Golden Buzzer! Which act did she slam it down for? It might very well be these two skating siblings, as they put a whole new spin on roller skating-literally! Tune in tonight to see, and read on to learn more about them!

While Billy, 30, doesn’t have an Instagram account, fans can still keep in touch with the roller skating siblings on Emily England’s Instagram account! The 28-year-old has 23.8k followers and over 400 photos of her life, both on and off the show. But don’t worry, she has plenty of pictures of her brother, and she’s never afraid to dedicate one of her posts to him.

Given the nature of their family’s acts, their family has had several near death experiences. They lost both their aunt and uncle while doing a dangerous circus act. Their aunt, Emily’s godmother, was the world-famous aerial silk star, Eva Garcia. When she was 38 years old, she died when she fell from 30 feet during a performance. Almost three years later, their uncle, Gilles Gonnerton, died at 47 years old during a trapeze stunt, where he fell 20 feet to his death.

“We know that means practicing every day from 9am to midnight – because sadly we know the terrible consequences of stunts going wrong,” Emily told The Mirror.

Emily added: “We don’t like talking about what could happen if we mis-judge a move by a millimeter. But, as generations have done before us, we understand we have to practice until we drop. Our lives depend on it.”

If Cowell seems overly confident in Billy and Emily’s AGT routines, that’s because he knows what they can do. When Billy and Emily strutted out on to the stage for their first AGT audition, Simon Cowell was caught grinning from ear to ear, as he was already aware of their immense talent. How has he seen them before? Billy and Emily’s roller skater routine was first featured on Britain’s Got Talent in 2015. Before getting eliminated, they made it to the semi-finals and wowed the judges and the crowd nonetheless.

They Have Another Brother

Billy and Emily have an older brother, Vittorio, who performs in Las Vegas. However, apparently they don’t speak to him, since he reportedly isn’t very supportive of them. When their father died, the younger siblings helped their mother as much as they could and performed on the street to make money. They’ve even performed for Prince Charles and Princess Anne! You’ve got to check these two out tonight to see what kind of roller skating tricks they will come up with next!

It’s been only a few hours since #agt has aired and we are flying. The support we are getting is pushing us to work harder! Thank you America! #americasgottalent #billyandemilyengland #agt #absinthe @absinthe_vegas #rollergirl #rollerfamily #rollerskating #rollerblading #skateboard #skateboarding apparel from @dsquared2