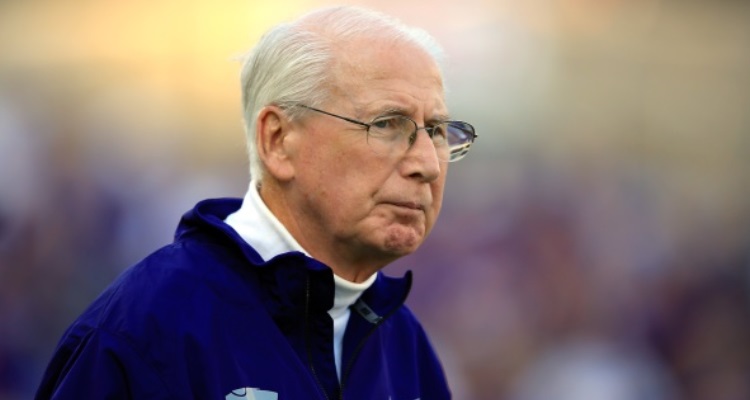 Bill Snyder’s family is dealing with a tragic loss. Matt Snyder, Bill Snyder’s grandson, died on Wednesday, according to the Riley County Police Department in Kansas. Keep reading to learn more about what happened.

Bill Snyder was born on October 7, 1939, in Saint Joseph, Missouri and is a Kansas State University football coach. Bill Snyder’s wife is Sharon Snyder and they have been married since 1984. He was previously married to a woman named Judy, from 1964-1979. Bill Snyder’s kids are: Sean, Whitney, Shannon, Meredith, and Ross.

In fact, Sean is associate coach/special teams coordinator of the Wildcats, Kansas State University’s football team. Bill and Sean work closely together to build toward the success of the team. Sean was Matt Snyder’s dad. It’s hard to imagine their loss at this time.

In November 2016, Bill Snyder was awarded a “200th Win” commemorative football for his record of 200 game victories with the Wildcats. He later sent out a letter thanking his team:

“My sincere thank you and immense appreciation for the role you have played in providing me the opportunity to have been a part of these 200 victories. The true victory, however, is what so many of you have meant to our football program and our university — truly unique and special.”

He continued, “None of this would have happened without the caring commitment of the young men who have played here, all past and present coaches and their families, as well as mine, our support staff, student body and our university faculty, staff and leadership.

To the people of the Manhattan community and K-Staters all across our state, nation and world — you are appreciated beyond words.”

According to police spokeswoman Hali Rowland, Matt Snyder was found dead at his parents’ home in Manhattan, Kansas. His death is being investigated as a suicide and no foul play is suspected at this time.

“Our thoughts and prayers are with the Snyder family during this very difficult time,” Kansas State athletics director, Gene Taylor said in a statement. “We are deeply saddened to learn of this news and ask that the family’s privacy continue to be respected. Sean, Wanda, and the entire Snyder family are greatly appreciative of the outpouring of support displayed by the K-State Family as they cope with this tragedy.”

“I am deeply deeply saddened to hear about the passing of Sean Snyder’s son Matthew. My heart breaks for Sean and his family. Please keep them in your thoughts,” said Ben Leber on Twitter.

Bill, 78, who battled throat cancer last year has not delivered a statement at this time and it’s unknown when he will return to work with his son. The family has asked for privacy during this tragic time.