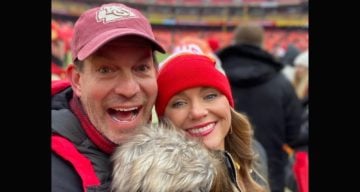 Tamara Day’s family has been in the spotlight since the home improver has been front and center on DIY Network’s Bargain Mansions. Tamara took her business to reality TV with the support of her husband, Bill Day. A financial planner by day, he has a background in flipping houses that helped Tamara’s business. Together, this couple manages to balance their home life while remodeling homes. This Bill Day wiki gives more insight into their relationship and family.

Bill Day was born on October 5, 1969 and is a native of Missouri. He is the oldest of three sons born to Wilma “Billie” Day and Virgil Day.

Before he passed away in 2017, Virgil Day had served in the U.S. Army. Together with his wife, Billie, he had invested in real estate and built a fortune.

Billie Day helped run the family’s real estate business. She passed away in 2018 after a prolonged illness.

Virgil and Billie are survived by their sons Bill, Tom, and Steve, as well their sons’ spouses, children, and grandchildren. Tom and Steve reside with their families in Missouri, while Bill currently lives in Kansas.

Bill Day graduated from the University of Missouri-Columbia in 1992 with a BS in accountancy. Since 1995, he has been running his own firm, BL Day Properties.

In 2013, he joined Integrated Wealth Advisory Services Inc. in Kansas. He is currently a principal/wealth adviser at the firm.

Bill learned a thing or two about flipping houses from his parents. It’s no surprise that Tamara credits him for getting her home-flipping venture off the ground.

Tamara Schraeder was managing a stall at Bartle Hall in Kansas City in 1998, while Bill Day was handling a stall next to hers. That was when they met, and they went on their first date six months later. Two years later, Tamara Schraeder and Bill Day tied the knot in November 2000.

In 2008, Bill and Tamara bought their forever home, a true “bargain mansion.” But before they could outsource the home improvement work to contractors, the recession hit.

Tamara, who had worked with her father Ward Schraeder, fixed up their home herself while caring for her three oldest kids who were toddlers then. From renovating their home, Tamara’s home improvement business began.

Tamara and Bill bought properties and remodeled them. Bill’s family background in the real estate business came in handy in flipping these properties.

She had both her dad and her husband to help. When her work became a TV show on the DIY Network, Ward joined Tamara, while Bill has been supporting her all the way.