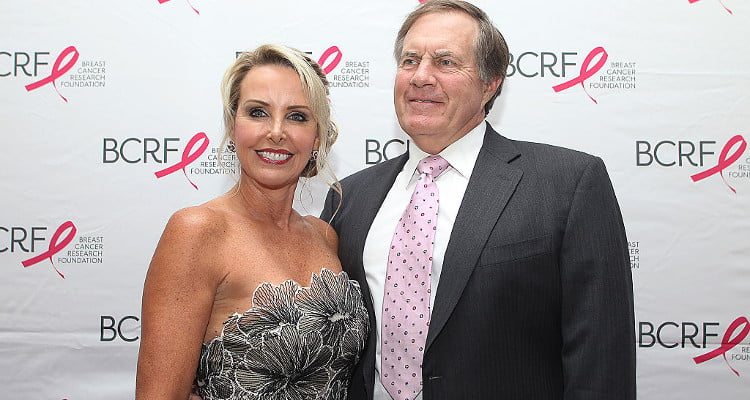 Bill Belichick is basking in the afterglow of the New England Patriots’ victory at the 2017 Super Bowl. But we’d like to know more about the lovely lady supporting him, his girlfriend Linda Holliday.

The Boston Celtics and Cleveland Cavaliers were locked in one of the most nail-biting games of this NBA season. You only needed to look at the stands of Boston’s TD Garden on Wednesday (March 1) night for proof. Along with Floyd Mayweather and U.S. Olympian, Aly Raisman, NFL coach, Bill Belichick was present at the game, as well. And when the jumbotron featured the Super Bowl winning coach, the applause was deafening! Belichick was at the game with some rather lovely company. It was none other than his girlfriend of 10 years, Linda Holliday. You need to know about the woman who has been by the Patriots’ coach’s side for many years. That’s why we’re sharing details about her age, work, and net worth in Linda Holliday’s wiki.

She Owned a Fashion Boutique and Was a TV Host

The 53-year-old is a football enthusiast, a die-hard Patriots fan, and has an amazing sense of style. She’s known among team wives circles for combining her impeccable fashion with the Patriots’ colors. Holliday is not one to compromise on style —probably because she ran her own fashion business once upon a time!

The Patriots web site reported that she owned a boutique named Blue Indigo from 2005 and 2007. These days, she’s a loyal customer of Bella Artistry by Leah Miller, who customizes sportswear with Swarovski crystals.

After her boutique closed down, Holliday changed gears and began working as a lifestyle correspondent for Styleboston, which aired on CBS Boston. In her Twitter bio, she describes the show as, ”New England’s insider lifestyle connection.”

Linda Holliday’s net worth is not known at this time, though Belichick has been coaching for almost four decades and has a net worth of $35.0 million.

She is the Director of the Bill Belichick Foundation

The 64-year-old coach founded the Bill Belichick Foundation to “provide coaching, mentorship, and financial support to individuals, communities, and organizations. Focusing on football and lacrosse, its mission is to bring the values of the Belichick family — a love of sports, coaching and team building — to the athletic leaders of tomorrow.”

Holliday is the director of the foundation. She’s also active in charitable causes and attends benefits together with her boyfriend, including one to raise money for breast cancer research.

Belichick and Holliday Met After Divorcing Other People

Belichick and his wife divorced in 2006, but had been separated since 2004. Their divorce was the subject of tabloids when the husband of former New York Giants receptionist, Sharon Shenocca alleged that the coach was having an affair with his wife for years. Belichick never commented on the accusation and the matter was resolved outside of court.

A newly divorced Bill Belichick was then spotted with another woman in 2007. He was seen getting cozy with Holliday, who is a decade younger than him, in the days leading up to Super Bowl XLII. At that time, Linda Holliday was also recently divorced for the third time. She has twin daughters from her previous marriage. And as you can see from the photo, twins Ashley and Katie Hess definitely inherited their mother’s fashion sense and beauty genes! The twins run a style blog called The Party of Two .

In her youth, Holliday participated in beauty pageants and was runner-up twice for Miss Arkansas. She’s also extremely active on social media. Holiday posts everything from Belichick, the Patriots, and football, to promoting her daughters’ blog on her Twitter and Instagram accounts.

She showed her love for Belichick and her favorite team when the Patriots won the 2017 Super Bowl against the Atlanta Falcons. On Instagram, she posted a collage to celebrate the Patriots’ victory and captioned it by calling Belichick “My Hero.” Most supportive girlfriend ever!