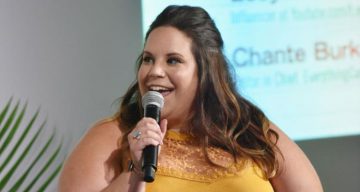 This can’t be happening! The latest episode of My Big Fat Fabulous Life had some bad news for Babs, and we still can’t believe it. Fans knew that the episode was going to be a sad one, but they didn’t know just how sad it would be for Whitney Thore’s mom.

Who died on My Big Fat Fabulous Life? If you missed last night’s episode, let us tell you—it was a doozy! And anyone who missed it is now frantically wondering who died!

After seeing a clip of Whitney and Babs crying over the loss of a loved one, fans are wondering who the beloved was. But don’t worry, we’ve got you covered!

Be warned, as My Big Fat Fabulous Life spoilers are straight ahead!

A Death in the Family

Like a typical episode of This Is Us, Tuesday night’s episode of My Big Fat Fabulous Life was full of tears, especially for Whitney’s mother, Babs. Sadly, Babs’ pet pig Mr. Pigglesworth died. And she’s absolutely heartbroken over it.

The unofficial show mascot was just two years old. And according to Whitney’s social media, Babs’ pig was supposed to have a lifespan of 12 to 15 years!

Viewers were teased about the news of a death a week earlier, but no one had a clear idea of who it was going to be.

Where Was Piggy When He Died?

In a previous episode, the family had made the decision to send Mr. Pigglesworth, who they affectionately call Piggy, to a rescue farm.

So, Whitney and her father convinced her mother to send the pig to live his “best life” at a farm. Piggy was to spend most of his time outdoor with other farm animals. And he was to get the best expert care possible.

At the time of the March 13th episode, Babs, Glenn, and Whitney were waiting for the chance to go and visit Mr. Pigglesworth. It had been weeks since he’d gone to his new home.

The Phone Call about Piggy’s Death

But, before they could see their beloved Piggy, Whitney got a phone call from Karen. Karen is the animal rescuer who had taken the family’s pet pig to the farm.

“I wish I were calling under better circumstances,” she said, “But I have some very sad news I have to share with you…  Mr. Pigglesworth has passed away.”

Whitney was obviously shocked to hear the news.

Karen told her that Piggy’s passing was quite sudden. “He was fine one minute and the next he wasn’t.”

Apparently, Mr. Pigglesworth became ill all of a sudden. He first developed a high fever and then his skin got all blotchy. The rescuers at the farm rushed him to the nearest vet.

Sadly, before they could get there, Piggy died of heart failure.

According to the vet, the cause of Mr. Pigglesworth’s death was a swine disease called erysipelas.

It’s triggered by a type of bacteria called Erysipelothrix rhusiopathiae. Pigs commonly get it from other pigs or their environment.

It’s unknown whether the pet pig had the bacteria in his system before he went to the farm or if he contracted it after.

Whitney was devastated at the news of Piggy’s unexpected death. She could barely speak she was crying so hard!

Karen comforted her by telling her how happy Mr. Pigglesworth had been in his new life.

“He got belly scratches and treats every single day. And the horses would lean over the fence and rub noses with him.”

The rescue team plans to cremate the Piggy’s body.

Whitney knew that the news would crush her mom Babs, so instead of calling, she went right over to tell her in person.

She dreaded what she had to say to her mom. “My poor mother loves that pig with all of her heart and and believed and trusted us that this was the best decision… And now I have to tell her that he’s gone.”

Her mother, father, and brother were all there when she got to her parents’ house.

Poor Whitney was sobbing so hard she could barely get the news out.

Babs was in disbelief at first. When the news sank in, she was inconsolable. It’s obvious that Babs had a deep bond with her pet pig.

“I just cannot stand this,” she sobbed in Whitney’s arms.

Whitney feels guilty because the pig’s death came after they had convinced Babs to send him to a new home.

“We sent Piggy off for a better life at the farm, but he didn’t make it,” said a tearful Whitney.

And Then There’s Buddy’s Struggle

On top of everything her mother was going through, Whitney had roommate issues to deal with.

The TLC star and fans were worried about Whitney’s roommate and best friend, Buddy Bell. He went to rehab to help get over his cocaine and alcohol addiction, and it’s been hard for Whitney to witness.

“Well, it was just really hard. I mean, it’s hard to realize that someone that not only you were so close to but that was living with you was struggling with something and you didn’t know and you couldn’t help,” Whitney revealed to Life & Style. “It makes you feel really powerless. So I’m just so proud of him, he’s still clean and sober, he’s doing amazing.”

Whitney also went into detail about how her friends thought something was happening with her “boo bear” (Buddy’s nickname) but didn’t know what it was. He was always secretive, and at one point, she thought he was depressed. She had no clue how serious his problem was, even though he was living in her house.

Also Read: Who Is Buddy on “My Big Fat Fabulous Life?” What Happened to Him?

“It was just shocking and difficult to feel like I wish I could have done more,” Whitney told Life & Style. “I think you start to kind of blame yourself — like, why didn’t I see the signs? Or could I be more supportive?”

Eventually, the two best friends had a much-needed talk during the cast’s Hawaiian trip, which also happened to be his first vacation during his sobriety.

Check out the clip below of Buddy and Whitney on their trip, discussing his issues and how he’s overcoming them. (Get the tissues, it gets emotional!)

Don’t forget to watch new episodes of My Big Fat Fabulous Life on Tuesdays at 8:00 p.m. EST on TLC.