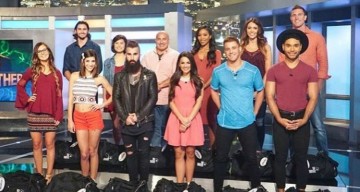 The Big Brother season 18 premiere is almost here, with the new House Guests making their first full appearance when the first episode airs tonight. This year, host Julie Chen will be welcoming 12 new Big Brother contestants into the house, and one way or another, the number of occupants won’t remain static: it will go down, and it may even go up! To prepare fans for the latest and potentially best season, the Big Brother cast has been revealed, and they make for quite the interesting ensemble. Here’s a little preview of why the Big Brother season 18 contestants may be one of the best groups yet.

The 18th and latest season of Big Brother is coming your way on June 22 (tonight) on CBS. While the show had the normal amount of hype that the reality series gets going into this new season, the introduction of the Big Brother season 18 cast definitely added fuel to the fire. The Big Brother 2016 contestants were revealed on June 14 via miniature bios on the official web site. This season’s cast members come from all across the United States—and in one case outside it—and hold a variety of different occupations which are sure to have influenced their individual personalities. But perhaps most striking is the cast’s ages. The majority of them are in their twenties, with only two older than that—and one of them, Glenn Garcia from the Bronx, is actually 50! How will he handle being in a house full of people half his age, which makes them young enough to be his own children? This is just one of the things viewers can look forward to this season!

About the Big Brother 18 Contestants

The Big Brother 2016 cast also has connections to previous HouseGuests from the series’ past. For instance, 27-year-old Paulie Calafiore is the brother of Cody Calafiore, who was the runner-up of Big Brother season 16. There’s also Tiffany Rousso, 32 years old—the second-oldest person on the show—and sister of season 17 contestant, Vanessa Rousso. Of course, these familial ties could lead to speculation of these two HouseGuests having an unfair advantage due to their siblings potentially giving them some sort of insider info, but that info would only do so much; after all, the results of the competitions will also be based on individual skill in addition to other factors, including the other cast members. Another standout is 25-year-old Corey Brooks—but not in a good way: several homophobic slurs he used on social media have already made him a target of fans’ dislike.

Here is the full list of the Big Brother season 18 cast:

This season only having 12 HouseGuests may seem strange, given that it is a smaller number of people (last season there were 14), yet their stay is the longest ever at 99 days. Well the secret looks to be out, thanks to an unlikely source: Canada. A commercial for the new season aired north of the border and it hinted more entrants with the phrase, “Who are the mystery guests?” alongside four silhouettes. Big Brother executive producer Allison Grodner, who claimed she wasn’t aware of the Canadian promo, said that “chances are there will be more people.” She then appeared to immediately contradict the “chances are” part and practically confirm more HouseGuests by adding that you will find out who they are following the season premiere. Of course, she could’ve meant we’ll just find out who the silhouettes represent and that they won’t be regular contestants, but we’ll know soon enough.

Tonight's the night! Click the link in our bio to find out everything you need to know about the season premiere of #BB18.