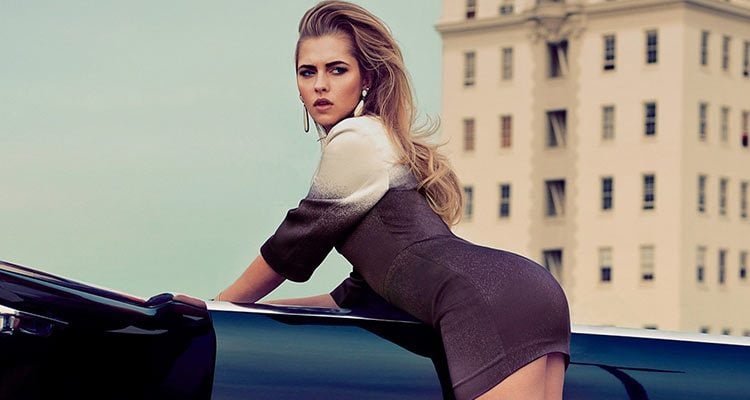 Bianca Kajlich may not be a household name, but there is a very good chance you recognize her as she’s been making her mark on various television shows since we first saw her on Boston Public. Get the scoop on the actress’s life and career, from Bianca Kajlich’s Rules of Engagement stint to her recent appearance on Curb Your Enthusiasm. You’ll know everything you need about the star, including Bianca Kajlich’s net worth.

Born on March 26, 1977, Bianca Kajlich’s age is 40. She was born in Seattle, Washington, to her mother Patti (née Campana), and her father, Dr. Aurel Jan “Relo” Kajlich, an anesthesiologist.

Bianca Kajlich began her career in entertainment not as an actress but as a ballet dancer. She danced with the Olympic Ballet Theater in Edmonds, Washington, for many years in productions like The River, Swan Lake, and The Nutcracker.

My mom sent me a newspaper clipping from when I was Clara in the Nutcracker? It’s good to remind yourself how long your dreams have been in play and how much they still mean to you❤️ sometimes as we get older we forget the joy that comes with dreaming, and convince ourselves that now we need to be more “realistic”. Our dreams are more than carrots dangling on sticks, they are the fuel that feeds our fire. The world desperately needs us all to live our passions out loud now more than ever❤️

Kajlich landed her first acting role in a commercial for Kragen Auto Parts. After that, it was off to the races.

Kajlich, like many actresses, started with small roles. She made appearances in movies like 10 Things I Hate About You and television shows like Sorority and Freaks in Geeks.

In 2000, Kajlich scored a reoccurring role on Boston Public as Lisa Grier. From there, she starred in Halloween: Resurrection, Dawson’s Creek, Rock Me Baby, Vanished, and Rules of Engagement.

Rules of Engagement went on for seven seasons and still runs in syndication to this day. Kajlich played the role of Jennifer, a nice young lady who is engaged to and eventually marries Adam (played by Oliver Hudson), a nice but ultimately naive guy.

Kajlich was with the show for its entire run. And the characters of Jennifer and Adam closed out the show with their wedding.

Perfect weather to pull out my @loveyourmelon beanie❤️ Please join me in supporting a brand dedicated to giving a hat to every child battling cancer in America. To date, they have donated over 2.5 million dollars and over 91,000 hats. Now that's some mad love❤️ #loveyourmelon

The year following the end of Rules of Engagement, Kajlich starred in Undateable, another sitcom that ended up running for two seasons. The show featured great comedic talents like Chris D’Elia and Ron Funches.

Bianca Kajlich’s first husband was Landon Donovan, who was a professional soccer player with the LA Galaxy when they got married in 2006. Kajlich and Donovan separated in 2009, and their divorce was finalized in 2010.

In 2010, Kajlich bought and renovated a cottage in Venice, California, for $1.3 million. However, she sold the 1,922-square-foot home with four bedrooms and three bathrooms for a hefty price of $2.9 million this year.

On December 16, 2012, Kajlich married radio personality Michael Catherwood, who is best known as a co-host of the syndicated radio show, Loveline. The couple welcomed their daughter, Magnolia Catherwood, in April 2014.

We both remember too many nights that we don't remember in this town. #vegasbaby #ellismania

Where Is Bianca Kajlich Now?

After she starred in Undateable for two seasons and ended it’s run in 2016, Kajlich has been busy with her daughter. But, she still takes gigs as she recently appeared on an episode of Curb Your Enthusiasm.

Kajlich does keep up a few social media channels for her fans. She has a Twitter account, but it’s very infrequently updated.

While she’s been taking a bit of time off, don’t be surprised if you see Bianca Kajlich show up on your screen in the near future.