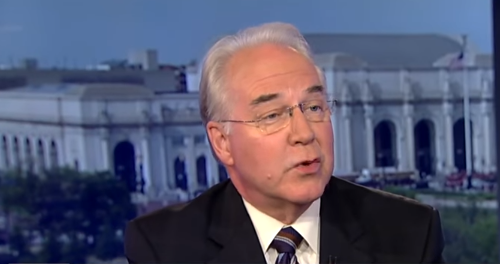 Tom Price and Betty Price are getting dirty looks from some taxpayers, after the secretary took several private trips around the world on government money. Who is Tom Price’s wife and what did they do? Here’s what you need to know.

Tom Price, the U.S. Health and Human Services secretary, went overseas on military planes several times this year, according to reports. He was allowed to use military jets to visit Africa, Europe, and Asia with his wife Betty Price, and the costs of the flights racked up more than $500,000 taxpayers’ dollars. He took over $400,000 worth of domestic flights, as well. A White House spokesman made a statement, saying that travel on military jets was often “an appropriate and necessary use of resources.” Unfortunately for Price, people have been criticizing his use of taxpayers’ money to travel. Since May, he has taken at least 24 private chartered flights to conduct government business. The price of his private and military air travels combined has passed one million dollars. On Thursday, Price said he would pay back the government $52,000 for the cost of his seats on the private flights, and would reimburse the government for his wife’s travel on the international flights. But what does the president have to say about it? President Donald Trump said he was “not happy” with the frequent use of private planes, and firmly said “I’m going to look at it. I’m not happy about it and I let him know it.” Price officially stated that such flights would no longer occur, and that he hopes to regain the trust of the American people, the administration, and the president. He said, “I work at the pleasure of the president. The president is a remarkable leader I’m incredibly privileged to serve in his cabinet and work on behalf of the American people.”

Although Tom Price is getting the heat, people are curious about his wife. Betty Price is an American politician, a member of the Republican party, and serves in the Georgia House of Representatives as the member for the 48th District. She first assumed office on July 20th, 2015, and was preceded by Harry Geisinger. She earned her Bachelor of Arts from Pomona College, and received her Doctor of Medicine from McGill University in Montreal, Canada. While completing her internship and residency training at the Emory University Affiliated hospitals, she met her future husband, a fellow physician, at Grady Memorial Hospital. For over 20 years, she worked in the medical field practising Anaesthesiology in Roswell and Marietta. For her service on the boards of the Medical Association of Atlanta, the Medical Association of Georgia, and the American Medical Women’s Association of Atlanta, she was honored and received two Awards.

The kids of Betty Price and Tom, include one adult son, Robert, who was a musician in the band Mockingbird Son, but the band broke up in August 2016. In 2017, she was tapped as a Deputy Whip for the GOP caucus, and elected as Secretary of the Fulton County delegation. In the Georgia House of Representatives, she serves on the following committees: Health and Human Services, Governmental Affairs – Elections Sub-Committee, Economic Development and Tourism, State Planning and Community Affairs, and Judiciary Non-Civil. Betty Price’s age has not been reported. If you’re looking for Betty Price pics, check out Tom Price’s Twitter account. He sometimes shares fun family memories on his social media.