Lindsey Jensen Leaving KNDU: Where Is the Yakima Reporter Going? 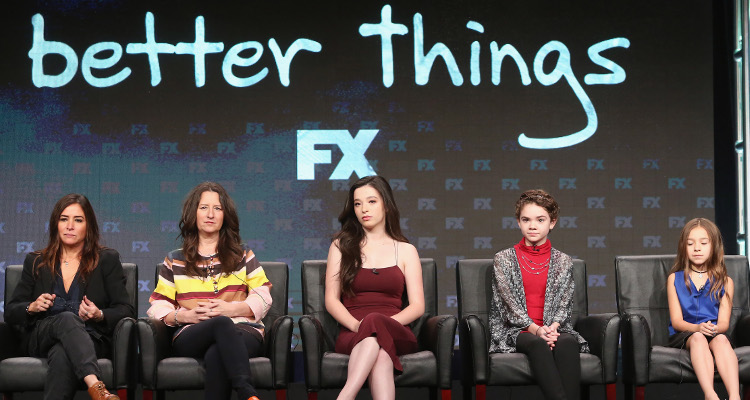 Better Things, Pamela Adlon’s amazingly real sitcom dedicated to herself and single mothers is back with another season. After winning our hearts in season 1, the FX dramedy is turning things up a notch with season 2. Of course, all our favorite ladies are back with more family fun.

If you appreciate the better things in life, you’re going to love this! Better Things is back with season 2 on FX tonight (September 14). The critically-acclaimed comedy drama on parenthood is as good as its stars.

If you haven’t caught up with the cast of Better Things, we’ve got everything you need to know right here! Here’s who you will see in the Better Things cast when the second season premieres tonight.

Not only does Adlon star in the series, the talented actress, writer, producer, and director is also the show’s creator. So for season 2, Adlon has taken on a role behind the camera as well by directing the entire season.

The real-life mom of three has turned her experience of balancing kids with work into a semi-autobiographical, no-holds-barred sitcom. She plays Sam Fox, an actress raising three daughters as a single parent while dealing with the pressures of Hollywood.

Sam Fox is trying to make it big in her field despite all obstacles. Four of those obstacles are her three daughters and their grandmother. While she’s directing the family-centric sitcom, Adlon refuses to follow the tried and tested format of laughter topped with a sentimental message in the end.

“I don’t like things to be wrapped up neatly, because I want people to explore their own feelings about what’s happening.” It would be interesting to see what viewers take from the episode where Sam demands a fake funeral to hear her daughters say nice things about her.

Pamela Adlon’s role on Better Things earned her an Emmy nomination for Outstanding Lead Actress in a Comedy Series. She may not think she can win it, but we think Adlon should clear some space on the shelf for another Emmy Award this Sunday (September 17).

Every problem. Every predicament. Every pain in the ass… #BetterThings pic.twitter.com/BSqu0kqWAD

Meet Sam’s first problem: Her teenage daughter Max Fox, played by 17-year-old Mikey Madison. The sitcom was Madison’s first major acting role, but coming from a big family with many siblings, she fits right in. If you loved Sam and Max’s interactions last season, you’ll be glad to know the rebellious teen won’t be giving Sam any peace this season either.

Max is a sharp-tongued blunt teen who has a lot to talk about with her mom, but at the same time, can’t bring herself to. “It’s really delicate being that age and trying to do all the teenage stuff, but also trying to figure out who you want to be and who you don’t want to be,” said Madison.

From the previews, that funny, awkward affection between Sam and Max is still there. And, Sam is still trying to separate Max and her no-good boyfriend.

And she wonders where they get it from… Find #BetterThings when the all-new season premieres Thurs at 10p on FX. pic.twitter.com/norOHYIA7W

A 14-year-old Hannah Alligood may look more like Cara Delevingne based on those brows alone, but she’s doing a pretty good job as Frankie Fox. In season 1, Better Things dealt with a subject most family-oriented sitcoms wouldn’t broach. Like when Sam is called to Frankie’s school, revealing that the middle Fox daughter identifies with a gender other than a female.

As ground-breaking as Frankie’s gender identity on the show is, don’t expect it to be addressed this season. Better Things has opted not dwell on it too much by leaving Frankie’s gender identity vague. They’d rather not label a 12-year-old on her own path to self-discovery. “The style of the show is that it’s like life where not all of the answers aren’t just handed to you. A lot of the things you kind of have to figure out for yourself,” explained Alligood.

Asking your kids to help? Yeah, good luck with that. #BetterThings is back for a new season tomorrow at 10p on FX. pic.twitter.com/OZp50aB8rw

She may be only 10, but Edward is on a path to becoming an actress as acclaimed as Adlon with Better Things. Duke may be the youngest of Sam’s children, but she’s wise beyond her years. The fact that she’s not at the stage to hate her mother is an added saving grace. Or maybe not, as Sam told her one episode, “You’re going to be mean to me, too. Your sisters already are. In fact, I need you to be mean to me when I’m old so I don’t feel so bad about being mean to Gran now.”

That’s not to say Sam’s most angelic daughter is not prone to mischief. We know Duke really likes her bed. And, she would give up everything for an extra 10 minutes of sleep!

Last season, we saw Duke fake sickness to skip school, and Sam let her. It looks like the bed isn’t Duke’s only love anymore. The trailer for season 2 shows the youngest Fox absorbed in some tech and not minding her mother. Also, don’t miss Duke follow the family tradition with her first swear.

Speaking of Gran, these three girls have an amazing one. Portrayed by veteran actress, Celia Imrie, Sam’s British mother Phyllis lives right across the street from her. This guarantees some hilarious eccentricities in Sam’s life, courtesy of the lovely Phyllis.

We know Phyllis loves stealing the spotlight from Sam. Unfortunately for Sam (great for us!), Gran has great timing to barge into Sam’s life and say the most outrageous and inappropriate things unintentionally, or so it seems. (Only Phyllis would know.)

Phyllis is all about attention and a perfect day for her would be when the world revolves around her. But does she get that much-needed attention in the new season? Without spoiling anything, Adlon said there is an episode titled “Phil” in season 2, and she’ll be more present this season.

Nonetheless, we wonder if Imrie, much like her character on Better Things, had Adlon write a bigger part for her. “She always gets mad at me,” Adlon said about Imrie, “And she throws away the script pages or whole scripts that she’s not in. [Laughs] She doesn’t care. She’s like, ‘I don’t care about that. I’m not in that!’ It goes in the garbage.” We’ll let you guess if that’s Adlon’s humor or the 65-year-old actress channeling Phyllis.

Pamela Adlon returns with an ode to herself tonight (September 14) with Better Things season 2 at 10:00 p.m. EST on FX. Take a look at how her daughters turn her life into hell (or the other way round) in the season 2 trailer below.