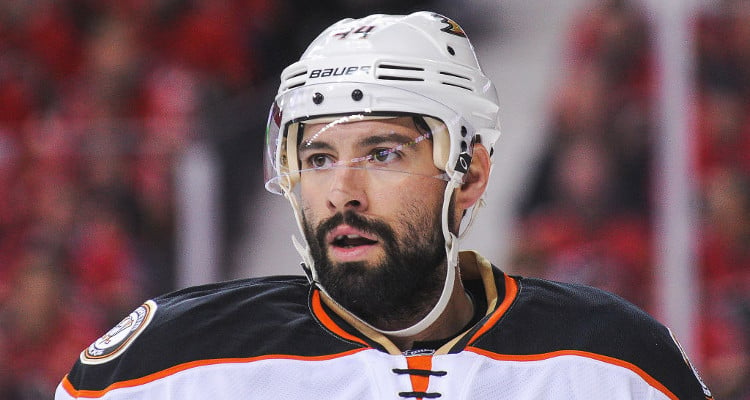 Real Housewives of New York City star, Bethenny Frankel might have found love in a hopeless place. Last week in the RHONY season 19, episode 9 promo, it looked like Frankel is dating Nate Thompson. For now, it’s just a rumor as nothing has been confirmed or denied. If you want to know more about the man many have dubbed “Bethenny Frankel’s boyfriend,” take a look at our Nate Thompson wiki.

Born on October 5, 1984, in Anchorage, Alaska, Nate Thompson’s age is 32. Standing at 6’0″, he is a hockey player who is currently a center for the Ottawa Senators.

During the 2001-02 season, Thompson played major junior ice hockey for the Western Hockey League’s Seattle Thunderbirds. In 2002-03, Thompson was chosen by the Boston Bruins in the sixth round of the 2003 NHL Entry Draft.

However, he stayed with the Thunderbirds for two more seasons. During the 2004-05 season, Thompson made his professional debut after signing with Boston’s AHL affiliate, the Providence Bruins.

It was in 2005 that Thompson’s professional career as a hockey player began. He signed an entry-level contract with the Boston Bruins and, in the 2006-07 season, made his debut in the NHL with the Bruins. He played four games as he spent most of the season with Providence in the AHL.

In 2008, Thompson was claimed by the New York Islanders, and soon after scored his first NHL goal against Henrik Lundqvist of the New York Rangers. The following year, he re-signed a one-year contract with the Islanders. During the 2009-10 season, Thompson was claimed off waivers by the Tampa Bay Lightning after scoring six points in 39 games. While playing for Tampa Bay, he scored one goal and had three assists.

He re-signed with the team in 2010 to a one-year contract. Tampa Bay then gave Thompson a two-year extension contract. He played in 51 games and scored a total of seven goals and 10 assists, for 17 points. He was ranked seventh in NHL forwards and fourth in the team for takeaways.

Thompson also played for his hometown team, the Alaska Aces of the ECHL during the 2012-13 NHL lockout, before being able to play for Tampa Bay once more. In 2013, Tampa Bay gave him a four-year contract extension. In the 2012-13 season, Thompson played 45 games, scoring seven goals with eight assists.

During the 2013-14 season, Thompson played in 81 games with 16 points; nine goals, and seven assists. In 2014, Tampa Bay traded Thompson to the Anaheim Ducks. His first season with the Ducks, he played 80 games, scoring five goals with 13 assists.

On December 2014, things took a turn for Thompson as he was issued a three-game suspension by the NHL Department of Player Safety after hitting Carolina Hurricanes player, Justin Faulk. Due to his suspension, Thompson lost $25,000. Talking about the incident, he said, “I feel like I’m an honest player, I’m not a dirty player. It was just one of those things where it happened fast. I wasn’t trying to hit his head. I’ve played with Faulker in the world championships in the U.S. He’s a great guy, great player.”

After playing three seasons with the Ducks, Thompson left the team in 2017 and became a free agent. He then signed a contract worth $3.3 million for two years with the Ottawa Senators. Nate Thompson’s net worth has not been calculated, but money does not seem to be an issue for him!

There are rumors that Real Housewives of New York star Bethenny Frankel is dating Nate Thompson. However, some sources say that they are just friends. Frankel met Thompson through their mutual friend, Carole Radziwill. According to reports, “She met Nate when she was with Carole [Radziwill]. Carole knows a lot about hockey so they started talking about hockey and they all had dinner at Catch in L.A. and again one night in N.Y.C.”

It was also reported that Frankel is still enjoying single life, and is not interested in dating at the moment. People took to Nate Thompson’s Instagram account to dispel the rumors, as the hockey player posted quite a few pictures with a pilates instructor named Sydney Kaplan, making people think that the two are an item.