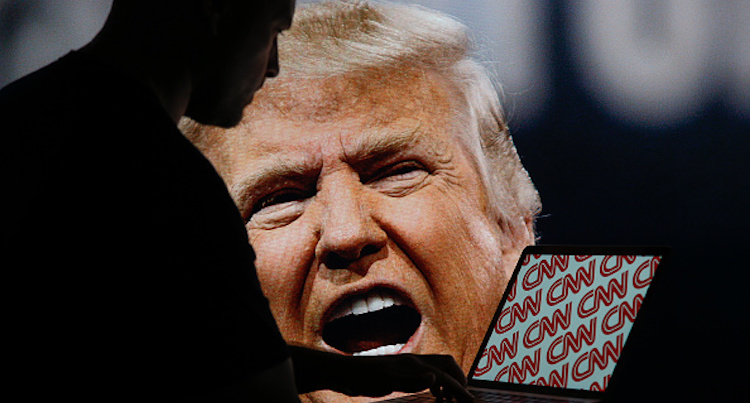 Let the mutiny begin! It’s far from a secret that the media and President Trump have been at odds since his first day in office, but now the social media gloves are off and a meme war has been declared! Trump CNN memes have been surfacing online and there’s no telling when they will stop. If you’ve been looking for a few funny CNN memes, then we have just what you need right here.

It looks like the president has more to deal with than just North Korea at the moment—he’s facing a battle from all sides! The media are tired of the alternative facts that the Trump administration has been spewing, and after the president was pictured in 2007 wrestling video—with a man who had a CNN logo for a head—things went from bad to worse. So, what did CNN do? They dedicated all of their resources to unmasking the Reddit user (HanA**holeSolo) and once they found him, he issued a lengthy apology online. But CNN delivered what appeared to be a veiled threat that said that the news network has the right to expose him, if they choose to, at a later date. The guy didn’t exactly harm their reputation, but their warning almost does. Since when does CNN sent out threats like an episode of Scandal?

What does this GIF of the president fighting the media mean? Well, it means war! CNN clearly means business and after the latest pro-Trump GIF was tweeted by the commander in chief himself, CNN couldn’t believe that the leader of the country would condone violence against the media. CNN memes have been circulating online and now the anti-CNN memes have gotten everyone’s attention. Has the mighty news network fallen? Have they given up being guardians of truth and democracy, or are they just as fed up as everyone else?

A portion of the apology read, “This is one individual that you will not see posting hurtful or hateful things in jest online. This is my last post from this account and I wanted to do it on a positive note and hopefully it will heal the controversy that this all caused.”

CNN stated that they weren’t threatening the user (who many are believing is 15 years old but this hasn’t been confirmed) but many aren’t interpreting things that way.

For now, the #CNNBlackmail is the story everyone is taking from recent events, and the best CNN memes were created as a result. The controversy hasn’t been healed so far and now other Internet users, who want to try a hand at satire themselves, have been going all in with the latest Trump-related incident. So, if you’re interested (and we know many of you are), have a look at some of the memes that have taken over social media.

A post shared by Conservative Review (@conservativereview) on Jul 6, 2017 at 6:45am PDT

You Got the Stuff?