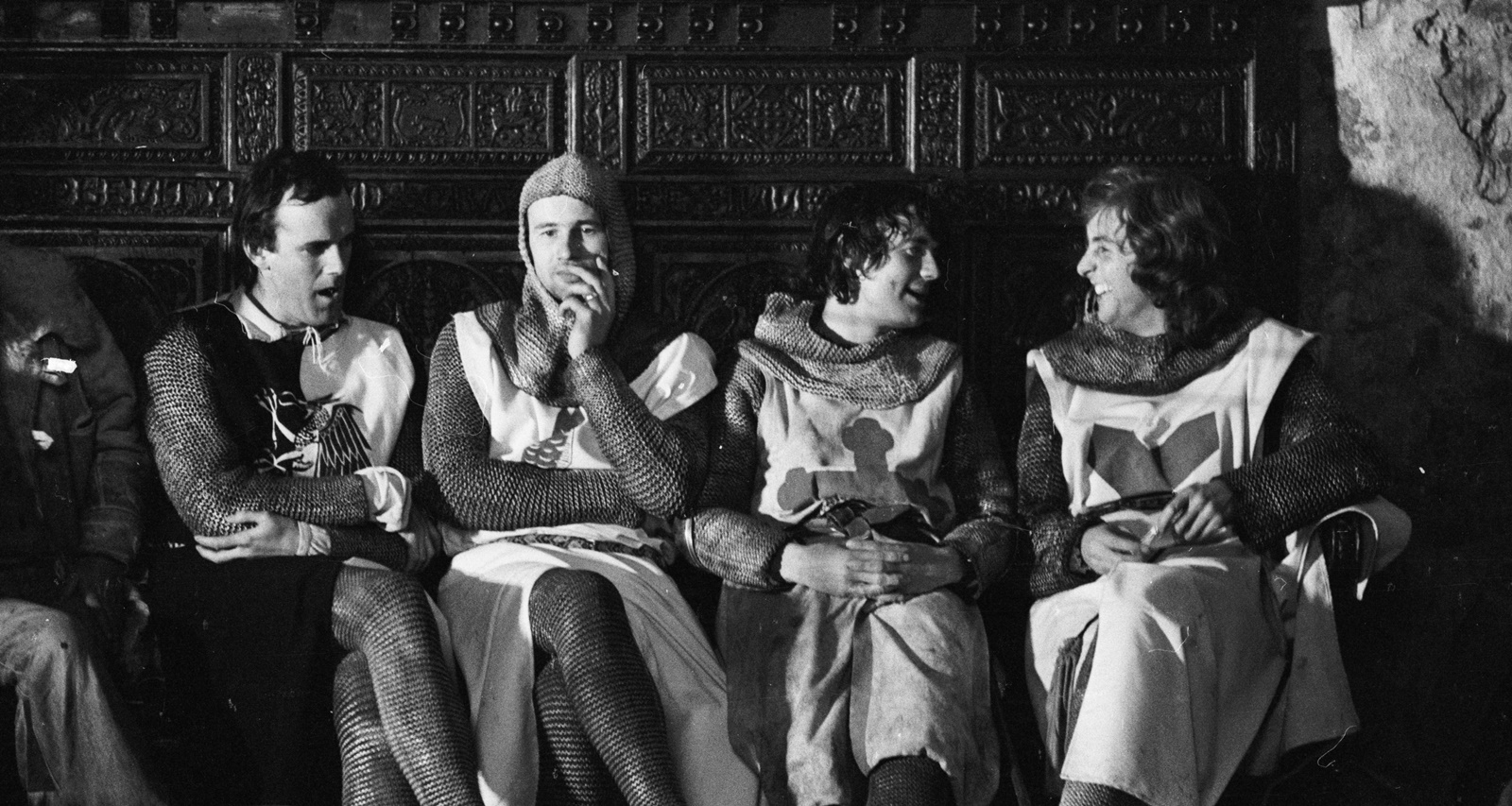 John Cleese, Neil Innes, Michael Palin and Eric on the set of 'Monty Python and the Holy Grail'. (Photo by John Downing/Express/Getty Images)

It’s Sunday night and you’re ready to settle on the couch with your favorite snacks and a classic film. So, what are the best classic movies on Netflix right now? We put together a list of some of the best old movies on Netflix to get you started.

Whether you consider a classic movie to be something made before a specific era or just a film that transcends trends and time, whether your preferred genre is Hollywood classic, thriller, musical, or ’80s cheese, there’s something for you on this list!

To make it easy for you to peruse, we’ve put this list of the best classic movies streaming on Netflix in chronological order, going from a 1947 fantasy rom-com all the way up to a dark comedy from 1988. Take your pick!

Note that these must-see classics on Netflix might not be available in all locations.

Plot: When Bishop Henry Brougham is down on his luck trying to raise enough funds to build a new cathedral and his marriage begins to suffer, he turns to prayer. The answer to his prayer comes in the form of a heavenly figure named Dudley who quickly ingrains himself in Henry’s life, much to the bishop’s chagrin. Mayhem ensues.

Plot: We have a true black-and-white, film noir classic to start off our list of the best classic movies on Netflix. After World War II, an unemployed pulp fiction writer, Holly Martins, makes his way to Vienna. Upon arriving, the American finds that his old school friend, Harry Lime, who’d promised him a job, has been killed in a suspicious accident. As he learns more about his friend, Holly gets pulled into a world of black-market dealings, corruption, and murder.

Posted by Who's Afraid of Virginia Woolf? on Saturday, August 10, 2013

Plot: You can’t really go wrong with Elizabeth Taylor and Richard Burton. This Oscar winner, based on a play by Edward Albee, goes down the dark and treacherous path of marriage discord. A middle-aged couple, George and Martha, suck an unsuspecting young couple into their hurricane of heavy drinking, verbal abuse, and mind games when they invite them over for a nightcap. If you love a psychological plot, it’s definitely one of the best classic movies on American Netflix right now.

Plot: Adapted from the true-life tale of American anti-heroes Bonnie and Clyde, this Oscar-winning film was groundbreaking for its time, earning it a place on our list of the best classic movies on Netflix. When Bonnie Parker, a restless waitress, meets a charming but sketchy man on the move named Clyde Barrow, her life changes drastically. Wanting to escape the poverty of Depression times, the young lovers embark on a far-reaching crime spree.

We've all had a Mrs. (or Mr.) Robinson in our lives. Who was yours?

Plot: Ben Braddock is back at his parents’ home after graduating from college, with the question of what he’s going to do with his life hanging over his head. But he’s distracted from life decisions by an affair with an older woman he’s known all his life. And when Mrs. Robinson’s daughter enters the picture, things go to a whole other level of complicated.

Posted by Deliverance on Tuesday, November 19, 2013

Plot: Four city friends go on a canoe trip through the remote (and fictitious) Cahulawassee River area in Georgia. The trip ends up being much more than they bargained for, leading the men down dangerous paths they couldn’t have imagined. This critically acclaimed film was nominated for three Oscars and five Golden Globes, helping it earn its place on our list of the best classic movies on Netflix. If you can handle some disturbing content, it’s worth delving into this cult classic.

Monty Python and the Holy Grail

Plot: Out of the best classic movies currently on Netflix, this one just might make you laugh the hardest. This wacky comedy takes us back to 10th-century England, following the legendary King Arthur on a hilarious quest to find new recruits for his Knights of the Round Table, and ultimately to search out the Holy Grail. Watch out for the dreaded Rabbit of Caerbannog!

All the President’s Men

Robert Redford and Dustin Hoffman in All The President's Men which earned 8 Oscar nominations (including Best Picture) and took home 4 statuettes.

Plot: Based on the non-fiction book by Carl Bernstein and Bob Woodward, this film shows how two journalists investigating a minor story for The Washington Post stumble onto a major, history-making conspiracy. All the President’s Men dramatizes how Bernstein and Woodward uncovered the infamous 1972 Watergate Scandal, which ultimately triggered the resignation of then-President Richard Nixon.

Plot: Ranked by many as one of the greatest films of all time, Taxi Driver definitely deserves its place on the list of best classic movies streaming on Netflix! This ’70s classic revolves around a struggling Vietnam War vet, Travis Bickle, working the streets of New York City as a taxi driver. Dealing regularly with the seedy underbelly of the city, Travis Bickle becomes increasingly unhinged and turns to violence in a misguided attempt to make the world a better place.

Raiders of the Lost Ark

Plot: For some people, a list of the best classic movies on Netflix would be made up of just Spielberg productions! We won’t go that far, but we’re definitely recommending more than one from the iconic filmmaker. And for many people, Raiders of the Lost Ark might just be their favorite film of all time. This first film in the franchise centers on Indiana Jones, an archaeologist on a mission to find the fabled Ark of the Covenant. With the year being 1936, of course Indy is pitted against the dreaded Nazis in this fun action-adventure.

Plot: Stripes is considered one of the top five films of 1981. Disillusioned after being dumped by his girlfriend and losing his job as a cabbie, John (Murray) decides to enlist in the Army alongside his best friend, Russell (Ramis). Despite his underperformance during basic training and devil-may-care attitude, John winds up becoming the unlikely leader of a diverse band of Army misfits—and their unruly shenanigans almost end up causing an international incident.

Rule #3: Don't EVER feed them after midnight

Plot: Gremlins is a rollicking combination of comedy and darker fantasy. A boy gets a weird but adorable new pet…that comes with some very specific rules. Guess what? He breaks those rules…and when he does, some small, mischievous, and dangerous monsters called gremlins are unleashed on his small town.

Plot: If classic war movies are more your speed, then Platoon is a must-see. A naïve young American gets a rude awakening when he joins the armed forces and is shipped out to Vietnam. He finds conflict not only with the enemy, but also within his own platoon, and experiences the true horrors of war.

She’s Gotta Have It

Plot: With a tiny budget of $175,000, groundbreaking director Spike Lee made a big impact with his first feature-length film, She’s Gotta Have It. Mainly done in black and white, this movie follows Nola Darling, a woman who is sexually involved with three men at the same time. Each of her partners wants her to be monogamous with just him, but fiercely independent Nola has other ideas.

Plot: This is a darker look at the common ’80s theme of popularity in high school. When a smart teen girl meets a sociopathic outsider, they combine forces to teach the popular kids, the Heathers, a dangerous lesson. If you’ve ever suffered at the hands of bullies or the cool kids at school, then you’ll want to move this one to the top of your list of best classic movies on Netflix to watch.