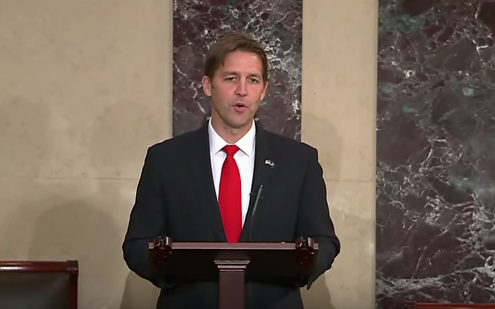 There have been more than a few shake ups in the White House since the Trump administration took over, and firing the director of the FBI was just the latest headline. Now, many are wondering, who is Ben Sasse? He’s been making waves of his own with the president, who hasn’t gone a single day without a complaint. Here’s what you need to know, with our very own Senator Ben Sasse wiki.

Benjamin Eric “Ben” Sasse is a junior United States Senator from Nebraska, and a member of the Republican Party. He was born on February 22, 1972 in Plainview, Nebraska and is 45 years old. Ben is a fifth generation Nebraskan and grew up “walking beans and detasseling corn,” according to his profile. He’s a graduate of Fremont High School, was scouted to wrestle at Harvard University and later on, he earned his doctorate in history from Yale University.

Not much is known about Ben Sasse’s family or his personal life, but we do know he’s married to a woman named Melissa and they have three children togerher: Alexandra, Breck and Elizabeth.

In this day and age, it can be hard to see the bright side, both abroad and in our very own backyard, but Sasse believes in restoring the American Dream. In his new book, The Vanishing American Adult: Our Coming-of-Age Crisis and How to Rebuild a Culture of Self-Reliance, he talks about accountability and hard work ethic, like the one he learned at home.

“I do worry that we are failing in a whole bunch of fundamental ways to distinguish for our kids between needs and wants, and we are failing to distinguish between production and consumption. So to be clear, this book is not an old man screaming, ‘Get off my lawn!’ It is a question of ‘How do we do better?’ It’s please, ‘Work in my lawn,'” Sasse told NPR when asked how young people are growing up in America today.

He added: “I think this category of perpetual adolescence, it’s a new thing, and it’s a dangerous thing. Adolescence is a pretty glorious concept. It’s about intentionally transitioning from childhood to adulthood. Being stuck in adolescence — that’s a hell. Peter Pan is a dystopia, and we forget that. Neverland is a bad place to be. It is good for kids to learn how to work. Right now, we’re acting like keeping our kids free from work is a way to treat them really nicely, when in reality thoughtful parenting wants to help free our kids to find meaning in work.”

The United States of America isn’t very united these days, in fact, many like Sasse believe it isn’t really America anymore, either. Since President Trump took office, there have been a number of controversies and conspiracies, leading to a seemingly unstable country. The most recent act of Trump tyranny was the firing of former FBI director James Comey, in the middle of an investigation involving Russia’s alleged interference in the 2016 election. To be clear, Sasse didn’t agree with that decision and to be clear again, Sasse didn’t back Trump’s presidency.

He also questioned the president’s ties to Russia and how close they appeared to be before the investigation even began.

“It’s not helpful that this was with the Russians,” he said to MSNBC. “This is just weird. We and the Russians do not have aligned interests. They want to exacerbate our internal distrust of each other, they want to fracture NATO. Putin is an enemy of the freedom of the press, speech and assembly, which is the beating heart of what America means.”