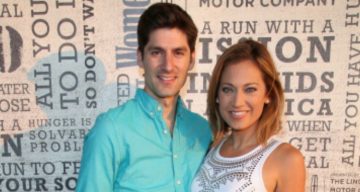 Want to know more about Ginger Zee‘s husband? Since the news came out about the ABC meteorologist’s mental health battles, many have been curious about Ginger Zee and Ben Aaron’s relationship. If you want to learn more, then have a look at our Ben Aaron wiki.

Who is Ben Aaron?

Ben Aaron’s age is 36 and he was born Benjamin Aaron Colonomos to his father Mark and mother Janis, in New York. He’s a media personality and lives in New York City with his family in a three-bedroom, three-bathroom 1,800-square-foot home, which they renovated. Ben Aaron net worth can’t be verified at this time.

When Zee came out about her depression and her book, she revealed how compassionate and supportive her husband was through the whole process.

“I’ve been lucky to find a husband who doesn’t judge my past,” Zee said of Aaron, whom she married in 2014. “In fact, writing this book, he wanted more, which says a lot. He’s like, ‘I want to listen. I want to be a part of that.’”

“It’s hard to just pick one thing that I am most proud of her for,” Aaron told People. “She’s the best mom, wife and meteorologist in the world. I often describe her as a goddess.”

When Zee was 7 years old, her parents got divorced and she stopped eating as much to have control over her life. By the time she was 12, she had developed a severe level of anorexia and her mother, a neonatal nurse practitioner,  entered her into therapy and treatment.

“There were girls who were on their way to death,” Zee said in a past issue of People. “It was shocking. It didn’t make me better right away, but I knew I had the great support of my family, and the fear factor was there.”

She added: “The anorexia will always be in my head. You can’t scrub that from your memory. But having a baby and then going into this challenge was really empowering. I’ve found a pride in myself that I’d never had before.”

Zee recently opened up about her depression and suicidal thoughts, which she said could also have been triggered by her narcolepsy—a sleeping disorder. She believed that the medication she was taking elevated her emotional state and played a part in her suicidal thoughts.

“It amplified everything,” she said. “Ups were amplified and downs were amplified. I’ve had to learn to live on that medication responsibly, because I can’t not have it. You have to be really, really careful with it.”

If you want to see more of Aaron and his family, then head over to his Instagram account. His latest post is about his wife’s new book, Natural Disaster: I Cover Them. I Am One.

“When I met Ginger, I knew immediately that she was the one. She was and is the most brilliantly magnificent woman I have ever met. Now, we can add incredibly brave to that roster of attributes. In her book, “Natural Disaster, I Cover Them, I Am One” she talks about all the things that make her who she is today. From mental health to tumultuous relationships, family issues (love you Dawn) and making her way to being one of the most revered female scientists in the country.”

Who wore it better? I know, it’s Adrian, he always wins.