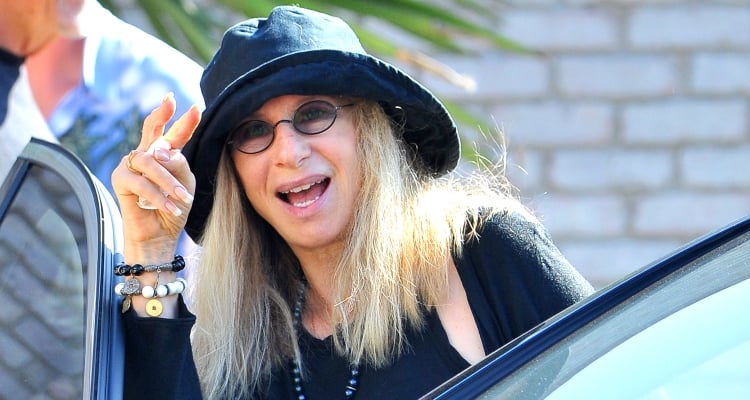 Barbra Streisand and “Donald Trump” blew the world away with their duet of “Anything You Can Do, I Can Do Better” on The Jimmy Fallon Show last night, August 25. Donald Trump was actually played by Jimmy Fallon, and the resemblance was uncanny! From the dance moves, to the hand gestures, to the toupee, Fallon was spot on! But who can forget Streisand? She was incredible on stage and her guest appearance was the perfect prelude for today’s release of her new duet album titled,Encore: Movie Partners Sing Broadway. Since this woman is so fantastic, here’s are some facts about Barbra Streisand’s net worth, career and personal life.

How rich is Barbra Streisand? Barbra Streisand‘s net worth is currently $370 million but after her Encore album, and Barbra – The Music… The Mem’ries… The Magic! Tour, this number could increase by the end of the year! Keep on singin’, Barb!

LA! Today is the start of Barbra’s The Music… The Mem’ries… The Magic! tour. Will you be at tonight’s show?

She is Decorated with Awards

For the past six decades, Streisand has brought audiences to awe, making herself an icon in multiple areas of the entertainment world. She has two Academy Awards, 10 Grammys, five Emmy Awards, a Special Tony Award, an American Film Institute award, four Peabody Awards, and many, many more. She’s also been recognized as one of the best-selling music artists of all time. She’s made over $68.5 million in album sales in the U.S. and over $145 million worldwide! At 74 years old, Streisand continues to exude grace, class and talent to this day.

She Just Wrapped up a Unique Tour

This performance diva is just as incredible as ever! The 74-year-old flexed her skills with her Barbra –The Music… The Mem’ries… The Magic! Tour to celebrate 60 years of #1 albums. What an accomplishment! She wasn’t alone – Academy Award winning artist Jamie Foxx joined her on stage, dressed to the nines. Her outfits matched her beautiful voice as she stole the show!

She Recently Celebrated her 18th Anniversary

Barbra Streisand and her second husband, James Brolin celebrated their 18th wedding anniversary less than two months ago. The lovers met at a mutual friend’s dinner party back in 1996. Their first encounter is a funny story: Streisand got his attention by telling him she didn’t like his hair! She gushed in an interview on The Meridith Show in 2015, saying he fell for her immediately “because I told him the truth.” She was charmed as he courted her, and his ability to cook was an extra bonus! He made sushi once – a dish she loves – and never cooked again. It’s the thought that counts, right? They were Married July 1, 1998.

She was Inspired by Movies Since Childhood

When Streisand was five, she attended the Jewish Orthodox Yeshiva of Brooklyn then moved to Public School 89, in Brooklyn. She was considered to be intelligent and inquisitive, but often distracted. It was in her elementary school years when she began watching the stars on the movie screen and television. She was in awe of the actors and actresses, and dreamed of being an actress.

Thankfully, her ability to sing was a gift she was born with. Known as “the girl on the block with the good voice,” she easily gained an audience. She first debuted her singing at a PTA assembly. Everyone loved her, but her mother was overly critical. Things took a turn when Streisand was 13, when her mother began to support her. She helped her make a four-song demo tape, which featured, “Zing! Went the Strings of My Heart,” and “You’ll Never Know.” What a beautiful beginning to a successful career!

She’s Diverse in the Performing Arts

Her voice brought her a lot of attention, but her main goal was to act. When she was fourteen she saw her first Broadway play, The Diary of Anne Frank. After the show she began studying the biographies of famous stage actresses, reading plays and novels, and even studying acting theories. She continued her education and had several opportunities to perform in plays. After graduating from Erasmus Hall in January 1959, she moved out into the heart of the New York City theater district, and took any job she could involving the stage.

Barbra w/ John Lennon, Yoko Ono and Ringo Starr. John was a romantic. He said one of his and Yoko’s favorite movies was The Way We Were !! #tbt

Barbra Streisand has come a long way from that struggling artist – now she’s known as one of the biggest pop divas of the century! Way to go Barbs!