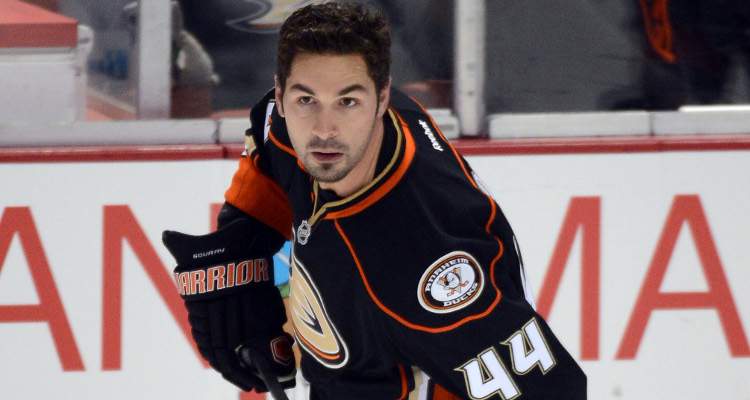 It looks like Barbie Blank, who is famously known as Kelly Kelly, split from her husband, Sheldon Souray! Just like his estranged wife, Souray is also quite famous in the sports industry. So, it comes as no surprise that Sheldon Souray’s net worth is estimated at $9.0 million. If you want to know more about Barbie Blank’s husband, then keep reading.

Born Sheldon Sharik Souray in Elk Point, Alberta, Canada on July 13, 1976, his age is 41. He is of Métis descent and his parents are Richard Souray and Lillian Parenteau.

When he was young, his family moved from the Fishing Lake Métis settlement to a much smaller community in Alberta so that his sister could attend school. However, two years later, his family moved again so that Souray could participate in organized sports.

When Souray was in elementary school, his parents divorced, and he lived with this mother until the age of nine. He attended Archbishop O’Leary Catholic High School with former fellow NHLer, Fernando Pisani.

Sheldon Souray is a former Canadian professional hockey defenceman, who first played for the Tri-City Americans in the Western Hockey League. Later on, he played for the Prince George Cougars, the Kelowna Rockets (in the WHL), and the Albany River Rats in the American Hockey League. He started his NHL career in 1997 playing for the New Jersey Devils.

Souray was played for the New Jersey Devils until 2000, when he decided to join the Montreal Canadiens, who he played with until 2007. He then played for the Edmonton Oilers from 2007 to 2011.

He reportedly signed a five-year contract with the Edmonton Oilers for $27.0 million. Following that, he played for the Dallas Stars for one year.

1st of 2 #tbt photos-Going back to 2009 for this one – Sheldon Souray then with the Edmonton Oilers-Souray was nice enough to give me his game used stick coming off the ice. #SheldonSouray #44 #EdmontonOilers #NewJerseyDevils #MontrealCanadiens #DallasStars #AnaheimDucks @edmontonoilers @ssouray

In 2012, Souray joined the Anaheim Ducks after signing a three-year contract with them for $11.0 million.

He was on the injured reserve list since 2014 due to a shoulder and wrist injury, until he announced his retirement on June 30, 2015. He was an unrestricted free agent for two years.

Throughout his career, Souray was famous for his heavy slap shot, and he unofficially set an NHL record for his hard-hitting shot. Additionally, he represented his country in international competitions, and took home a silver medal at the 2005 World Championships.

He is currently a co-owner of a pizzeria! Along with Montreal restaurateur, Andrea Dell’Orefice and former NHL goaltender, Martin Brodeur, he co-owns Rivière-des-Prairies Pizzeria.

In 2002, Souray tied the knot with former Baywatch actress, Angelica Bridges. However, their marriage only lasted five years. They have two daughters together: Valentina Raine Souray and Scarlett Skye Souray.

He reportedly, got engaged to former professional wrestler and reality television star, Barbara Blank, in August 2014. The two got married in Mexico on February 27, 2016. Their union was attended by family and friends.

At the time, Blank said, “I couldn’t be happier! Tonight was the most magical, incredible night and I’m officially Mrs. Souray! I’m the luckiest girl in the world to have married my best friend!”

Blank also said, “I think it’s the coolest thing. I’m just like, [singing] ‘This is my husband!’ I just love it! … I mean, nothing’s really changed. I think it’s just exciting that we’re husband and wife. It’s like him and me now. It’s so special — that feeling.”

Souray was also ecstatic and said, “Barbie came into my life and swept me off my feet! I’m thrilled to have this amazing woman become my wife and looking forward to spending my life with my best friend!”

However, recent reports surfaced and say that Souray and Blanks split. Rumor has it that the cause of their divorce is Blank’s role on E!’s, WAGS LA.

On an episode, Blank confessed, “My husband wants a baby and I want to get in to more work, so that’s like where I feel the arguments kind of come in.”

Later, she is seen sobbing while telling the girls, “We haven’t seen each other in like two weeks. I don’t know if he’s gonna be like, ‘I want a divorce.’”

Talking about their split, Blank said, “Sheldon and I have decided that it’s best we take some time apart to work on ourselves at this time. We have the deepest love and respect for one another and would really appreciate everyone respecting our privacy during this difficult time. Thank you!”

Currently, there are no details about Barbie Blank and Sheldon Souray’s divorce.

It looks like Souray is not active on social media and prefers to keep his life private. On the other hand, his estranged wife likes to update her followers on her professional and personal life.

So, if you’re looking to find out more about the couple’s current relationship status on Sheldon Souray’s Instagram account, you’re out of luck!