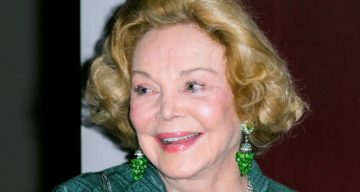 Many mourn the loss of Barbara Sinatra today, as the woman best known as Frank Sinatra’s wife died at 90 years old on Tuesday. People are wondering how the socialite and philanthropist lived her life and how she became Frank’s wife. For more details, have a look at out Barbara Sinatra wiki.

Barbara Sinatra’s age was 90 years old and she was born Barbara Blakely on March 10, 1927 in Bosworth, Missouri. According to her autobiography Lady Blue Eyes: My Life with Frank, her family was “broke” and she was dressed the same as her sister, “guaranteeing us a lifelong aversion to each other.” When she was 10 years old, she moved to Wichita, Kansas where her classmates made fun of her for her appearance and country twang accent.  She moved to Long Beach with her mother after World War II and received acceptance to the Robert Edward School of professional Modeling. Shortly after, she was made Model of the Month and in 1948, was crowned queen of the Belmont Shore pageant.

Barbara’s only child was Robert “Bobby” Oliver, whom she had with her first husband Bob Oliver, an Italian-American Sinatra-sounding singer. Nat King Cole was a friend of his and played piano at the couple’s wedding. But unfortunately for Barbara, Bob wasn’t talented like Sinatra and couldn’t find work as a singer anywhere in New York. The former Ford model was broke and pregnant so she decided to open up her own modeling agency in Long Beach called the Barbara Blakely School of Modeling.

She Was Married Several Times

Barbara’s school was successful but her marriage to Bob wasn’t solid and she had an affair with Zeppo Marx of the Marx Brothers, a famous comedic family. They met while she was working at the Vegas Riviera Hotel and they were married from 1959 to 1973. Marx offered to pay for Bobby’s tuition to a Long Beach military school and Barbara’s rent at a motel near the Racquet Club in Palm Springs. Bobby even took Marx’s last name but Bob wouldn’t allow him to be adopted by Marx.

Barbara met Frank when he asked her to play tennis with one of his ex-wives, Ava Gardner. After Marx and Barbara divorced, she became the fourth and final Mrs. Sinatra from 1976 to his death in 1998.

Barbara Sinatra’s Cause of Death

According to the director of the Barbara Sinatra Children’s Center, John Thoresen, she died of natural causes at her California home and was surrounded by family and friends. Besides being a socialite, Barbara was a philanthropist and her need to give to others came from her poor upbringing. Despite being surrounded by the wealthy and being one of them, she never forgot her humble beginnings. In 1986, she and Frank founded the Barbara Sinatra’s Children Center Foundation, which aimed to help children who were victims of abuse. She is survived by her son, Bobby Oliver Marx, his wife, Hillary Roberts and their daughter, Carina Blakely Marx.