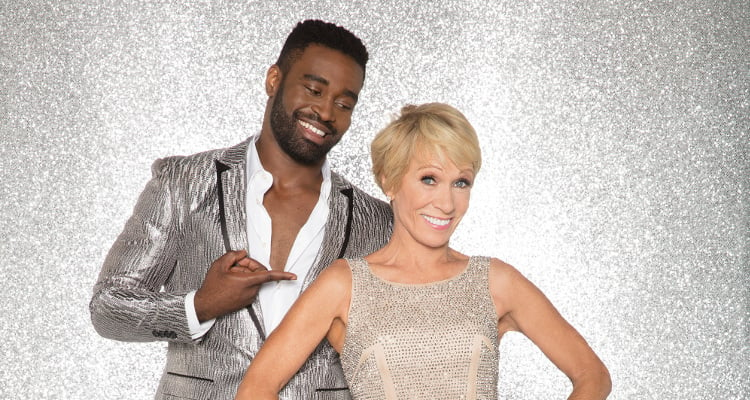 On the season 25 premiere of Dancing with the Stars, Barbara Corcoran appeared to grab her partner, Keo Motsepe’s crotch. A lot of viewers poked fun of the handsy moment on social media. Though they had the lowest scores in week 1, fans are hoping that the pair will do better this week.

A few moments before receiving their scores, Barbara Corcoran placed her left hand near Keo’s crotch, where it remained for a few long seconds, and people poked fun at this little handsy moment online. After being questioned about it by US Weekly, Corcoran said, “There was no crotch grab. I just happened to land my hand on that very important part. And then I felt something in the way, and I moved away.” Well, the moment received much more publicity than Barbara Corcoran and Keo Motsepe’s performance. The duo received a score of 14 out of 30 for their premiere night performance. Leaving behind the scandalous moment, here’s everything you need to know about Barbara Corcoran and Keo Motsepe on Dancing with the Stars.

Born on March 10, 1949, Barbara Corcoran is a successful businesswoman, speaker, investor, consultant, author, syndicated columnist, and television personality. She is most famous as a television personality on ABC’s Shark Tank as an investor. However, she also co-founded a real estate business back in 1973 called The Corcoran Group, publishing The Corcoran Report in the mid-1970s based on real estate data trends in New York City. She sold her business in 2001 to NRT Incorporated for $66.0 million. Apart from currently being an investor on Shark Tank, Corcoran has invested in more than 20 businesses. In September 2017, the world was caught by surprise when Barbara Corcoran’s Dancing with the Stars stint was announced. The lady who paved her way in the world of business is now seen dancing away on stage. With her determination, we’re pretty sure she’s going to put everything she has on the show!

Also Read: Jordan Fisher and Lindsay Arnold on “Dancing with the Stars” 2017: Could this Be the Couple to Win It?

Born on November 24, 1989, Keo Motsepe is a South African dancer who specializes in Latin and ballroom. At the young age of 11, he started his career by entering into a competitive dance scene, where he represented his country. In 2012, he joined the cast of Burn the Floor. Two years later, Keo Motsepe’s Dancing with the Stars journey began when he joined the cast as a pro-dancer. He has been on the show since season 19. Although he hasn’t bagged the Mirrorball Trophy yet, his performances have been incredible and highly appreciated by both the judges and audience.

Barbara Corcoran and Keo Motsepe have been working hard for their next performance. Motsepe went on to say, “I think the first week, all the nerves are gone. Now she knows camera blocking, how everything goes, having the audience, the judges, everyone—I think she did great. I won’t lie she did amazing, I’m so proud of you and next week we’re going to come back strong.” Well, it all comes down to teamwork and Barbara Corcoran and Keo Motsepe definitely make a great one! Although they might not have received a great score in week 1, a quality that makes this duo different from the rest of the Dancing with the Stars cast is their comfort, respect, and perseverance!