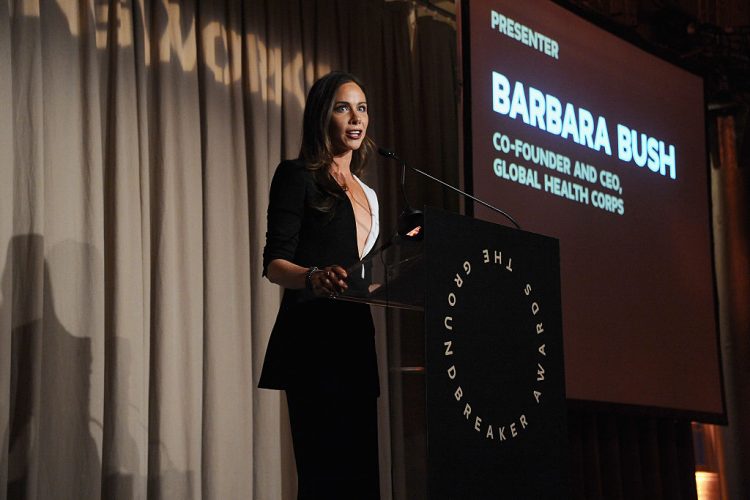 Her father was once the leader of the free world, but Barbra Bush has been carving her name in the world of health care. She has become one of the leading activists for health equity, and it seems like she’s trying to make the world a better place. She’s a young, attractive, successful, woman living in New York and many want to know about her personal life.

Keep reading if you want to know who Barbara Bush is dating.

Who is Barbara Bush?

Barbara Pierce Bush was born on November 25, 1981, along with her twin sister Jenna in Dallas, Texas. Barbara Bush was named after her paternal grandmother, whose first name was Barbara and had the maiden name of Pierce.

Happy Birthday Popsicle. Thanks for lifting me up since birth. (PS you were more interesting than this yawn!)

At the time their birth, her father was just a Texas businessman, and her grandfather was in the midst of his first year as Vice President, under Ronald Regan. While she and her sister may have led relatively normal lives, the spotlight was cranked up when her father ran for the office of President of the United States in 2000.

The White House Years and Beyond

Bush’s twin sister famously asked her dad not to run for president stating, “Oh, I just wish you wouldn’t run. It’s going to change our life.” She wasn’t wrong.

Barbara Bush ended up heading off to Yale for her first year of university during her father’s first term in office. It was then that the two girls became more familiar to the public, as they were involved in numerous incidents involving the law and underage drinking.

Soon after that, both girls settled down, and Barbara Bush was hard at work in her studies at Yale. After leaving school, she had a few different positions before becoming co-founder and president of Global Health Corps. It’s a non-profit organization that selects young professionals for paid, year-long fellowships with organizations promoting health equity in countries like East Africa, Southern Africa, and the United States. The objective is to help spread cultural awareness of healthcare and healthcare ideas.

Barbara Bush has no yearnings to enter the political ring, and you may be interested to know that she isn’t even a registered Republican. Both Bush sisters have stated that their parents taught them to think for themselves and vote on the issues that mattered to them as they saw fit. So, Bush voted for and helped out with many not-so-Republican causes, including voting for Hillary Clinton in the last presidential election.

Who is Barbara Bush Dating?

Bush is quite the catch—she’s smart, attractive, and has a good job. So, who is Barbara Pierce Bush dating? Is Barbara Bush married?

We’ve snooped around, and we can safely say that Bush is not married. As to who she’s dating, that’s a little more complicated. And the truth is, we aren’t sure.

We know that she was last dating filmmaker Andrew Jenks. But both Jenks and Bush are very tight-lipped about their personal lives, so we don’t even know if that relationship has ended.

Interestingly, Barbara Bush’s sister once tried to hook her up with Prince Harry during an interview on national television. Obviously, they didn’t get together, and Bush was a little embarrassed. But, you can’t blame her sister for trying!

Barbara and I are always better together. We’re so excited to share our exclusive new “Always Better Together” shirt with all of you, because we love having each other. Join us and support SBP’s work rebuilding communities hit by Harvey and Irma when you buy at omaze.com/together.