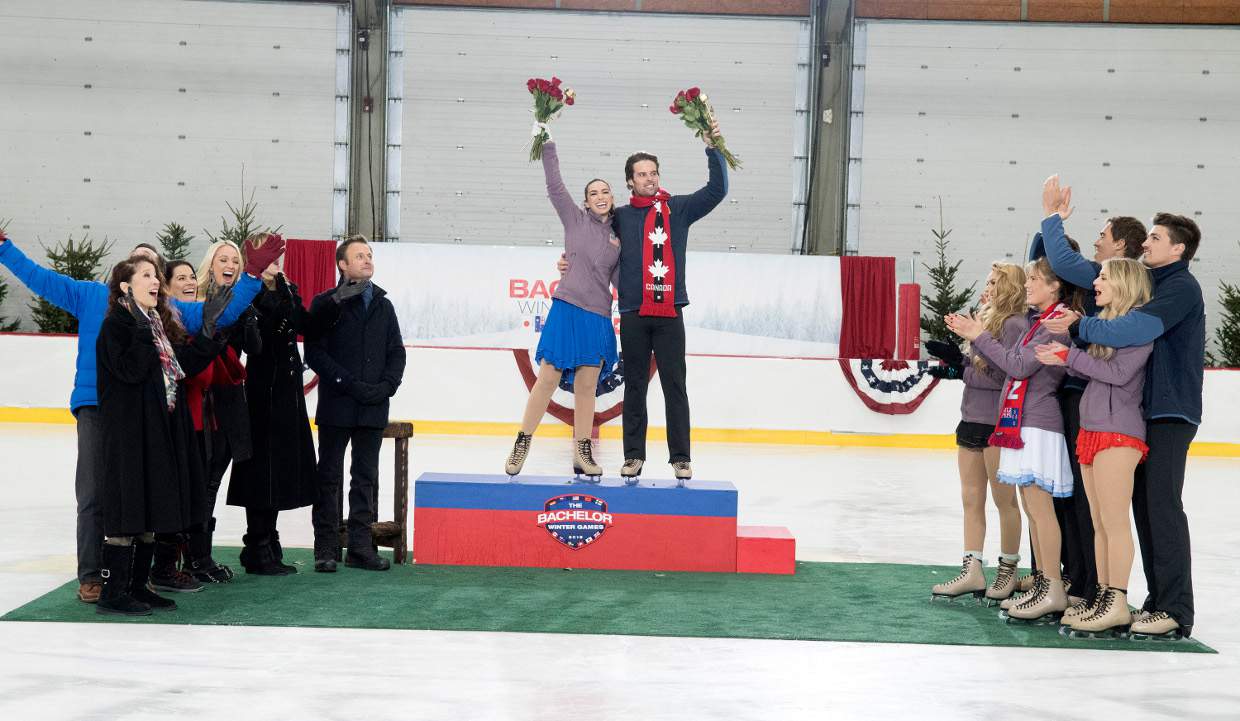 If you haven’t watched the show yet and are planning to, then beware, this article contains The Bachelor Winter Games spoilers!

Let’s begin by talking about all the steamy romance that blossomed throughout the season, leading all the way up to final night and the Fantasy Suites! For the entire season, couples kept their intimacy at bay, and then there was a little bit of naughty drama in the three-and-a-half-hour long The Bachelor Winter Games finale. So, did the winning couple head for the suite after their victory?

Race to the Finale

The finale was all about the final five couples—Mauger and Bibiana Juliana, Lesley Murphy and Dean Unglert, Luke Pell and Stassi Yaramchuk, Courtney Dober and Lily McManus, and Ashley Iaconetti and Kevin Wendt.

The season finale begins with practice sessions and rehearsals for the beautiful (and final) ice dancing competition.

Having fun is the main motto of the challenge. And while four couples bond over dance and the ice, it looks like Bibiana and Jordan are running into some roadblocks.

Jordan tells Bibiana that he would love to discuss their exciting future together, but she starts to have serious doubts.

Bibiana starts to feel suffocated, and the downward spiral begins. After all, it has only been a few weeks of being together.

However, in those few short weeks, the couple seemed to have fallen head over heels for each other! Riddle us this: why come on a dating show to find love when you’re not ready for it? Right?

Anyway, Bibiana has a bit of a meltdown after she realizes how fast everything is going for her. So, what should’ve been a very romantic ice dance, melts into a small puddle.

Bibiana decides she needs to go home, leaving Jordan wondering what went wrong. She claimed they were just at two really different points in the relationship and she realized she wasn’t ready. She said he was on Chapter Ten of their story, while she was still just reading the title!

One couple down, four to go! So, who was it that came out on top of The Bachelor Winter Games? And did anyone really find true love?

You will be surprised who actually did, so keep reading!

Love Is in the Cold and Crispy Air!

With a fresh new day, contestants attended the final rehearsals for their final competition. The four remaining couples get one-on-one Fantasy Suite dates after their practice sessions.

The trending couple, Stassi Yaramchuk and Luke Pell, talk about where their relationship is headed.

Stassi admits she’s developing strong feelings for Luke, feelings she hasn’t had for anyone else. She is ready to give their relationship a real try, even with thousands of miles between them!

Although Stassi comes from Sweden, she is seriously falling for Luke, and she’s ready to follow him anywhere. She tells Luke she can’t stay in the Fantasy Suite with him, but the two discuss their feelings and their future. It seemed like these two had really found true love in one another!

Stassi says she wants to love and be loved, but it’s too fast for her to head to the Fantasy Suite! Luke is totally respective about it and joins her for breakfast the next morning.

The one-on-one date between Dean and Lesley is far too sweet and emotional. Lesley talks to Dean about her double mastectomy and how worried she is about the way she looks after the procedure.

Dean’s nothing but a darling and tells her that she has nothing to fret about. He tells her she is beautiful and that she is the strongest woman he has ever met.

The couple then heads off to the Fantasy Suite for some romantic alone time.

Lily and Courtney’s date starts off on a very romantic note, and the couple looks like they are in love!

Lily tells her beau how she has fallen for him, even more than she did on her own Bachelor season in New Zealand!

But Lily also feels it is too soon to spend the night together in the Fantasy Suite, and Courtney is such a gentleman about it! Courtney is convinced that Lily really feels he is the one for her and respects her wishes to wait it out.

Ashley and Kevin are in the spotlight in this Fantasy Suite frenzy finale, as she is still a virgin! The 29-year-old has always been upfront about the fact that she’s a virgin, even on past seasons of the show.

Naturally, everyone is dying to know if she finally gave it up!

After an emotional breakdown about keeping her virginity, Ashley tells Kevin why she waited. She tells him that she thinks he was worth the wait.

To every Bachelor Nation fan’s surprise, Ashley goes to the Fantasy Suite with Kevin! We obviously don’t see what goes down that night, which had all of Bachelor Nation frantically wondering, did she do it?

Come morning, Ashley and Kevin say they had so many conversations with each other that night. However, Ashley wants to keep the rest of the night between herself and her beau.

It’s time for the final skate-off, and boy, is it entertaining for judges Randy Gardner, Nancy Kerrigan, and Tai Babilonia to score the couples on their ice dancing performances! It’s every bit a disaster as the couples try to stay on their feet and deliver a worthy ice skating performance!

After all was said and done, the winning couple was announced as Ashley and Kevin! (Cue all the screams for Ashley, the token “crier” and forever hopeless romantic!)

That’s right, Ashley and the hella-hot Canadian boy have done it! And the fans couldn’t be happier for her!