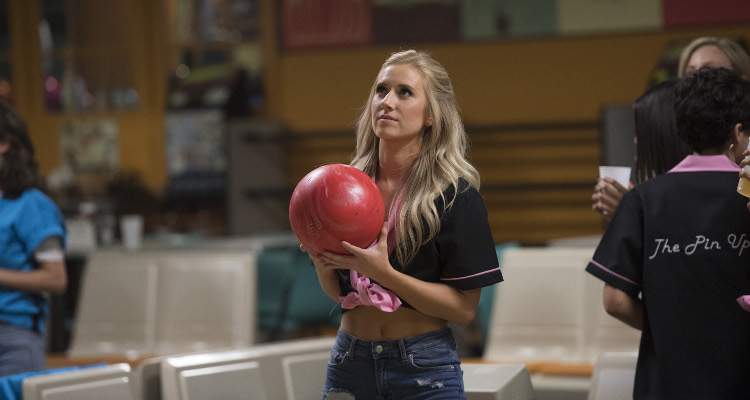 Sacre bleu! The Bachelor went to Paris this week for romance, roses, and the dreadful two-on-one date. Miss any of the action? We’ve got The Bachelor spoilers to top off your Monday night entertainment, right here.

The Bachelor Week 6 was the best this season. Arie and the remaining ladies traveled to the city of love, a.k.a. Paris! And nothing can make an international Bachelor destination better than a two-on-one date! We’ve been waiting for this moment, Bachelor Nation. It’s Krystal’s moment of reckoning! Who went home tonight? We’ve got The Bachelor recap, right here.

We kick off The Bachelor’s French adventure with Arie and Chris Harrison having a little heart-to-heart in a Parisian park. Chris has the all-important job of reminding Arie that he needs to make the right decision or he’ll end up alone forever.

With that, he drops by the ladies’ houseboat party to throw the two-on-one date card bombshell. Everyone’s reaction is the same as it’s revealed Krystal would be one of the two girls going on the date with Arie. Krystal laughs it off acting like she’s not worried.

“I wonder who will be on the two-on-one…with me,” she quips adding, “I’m not backing down and running away.” Her overconfidence already has the other girls rolling their eyes. More on that later.

But first, Lauren B. finally has her chance to shine without the other Laurens to confuse us! She gets the first one-on-one date in France, which includes a boat ride on the Seine. Can we please take a moment to appreciate the beauty of this city? Thank you.

The date starts off awkwardly silent with Arie playing tour guide. Lauren’s only monosyllabic response to everything is a “Wow.” Girl, you’re in Paris! Show some excitement! Even Arie starts to worry that she’s not that into him.

“It terrifies me that I’m not going to be able to open up enough.” – Lauren B. #TheBachelor pic.twitter.com/ygtEPrcbob

He makes a genuine effort to get her to open up during dinner and Arie makes a shocking revelation about his own past. His previous girlfriend was pregnant but suffered a miscarriage while he was away racing cars. After the miscarriage, the girlfriend left him.

This is a lot to take in, but at least now Lauren is talking. She, in turn, opens up about her parents’ difficult marriage, a failed engagement, and her trust issues with men. Arie is happy she let her guard down and that this date ended better than it started.

Moving on to the group date with Becca K., Seinne, Bekah M., Tia, Chelsea, and Jenna at the famous cabaret, Moulin Rouge. Not surprisingly, the girls must learn a dance routine—which they have to perform in some seriously skimpy outfits! (Poor Tia! As if her choreography wasn’t bad enough, they had to blur our her backside when she put on her costume!)

Dressed in feathers and sequins, the ladies audition for Arie and Miss Janet, the woman who seems to run the show. Based on their performance, Arie had to choose one woman to give the rose to, and together, they’d get to make a cameo in the live show in front of a live audience!

On the basis of “connection,” Arie hands out the date rose to barely legal Bekah. (Let’s hope her mother knows she’s in Paris before filing a missing person report!) Cut to the other women envying Bekah from the audience during their stage performance (and Arie’s awful lip-syncing!)

Everybody can-can at the Moulin Rouge! #TheBachelor pic.twitter.com/qJ3FtXpvjV

Now that we’ve got the obligatory dates out of the way, bring on the two-on-one! We know that producers kept Krystal around for this moment. As for the other unfortunate contestant, it’s taxidermy queen, Kendall.

Krystal is convinced she’s got this in the bag and is imagining Kendall freaking out. Something tells us Krystal is being set up for a massive fall later.

The two ladies are dropped off at a French chateau and go for a stroll with Arie. He reveals his concerns regarding both women and is seemingly weighing them both; Kendall has never been in a long-term relationship. Krystal threw a tantrum and offended him in Florida. Oh the dilemma!

Their date starts in a hedge maze, giving us all the Goblet of Fire feels. If only there were a Harry Potter date on this show! Back to the topic. Arie wants to get to the bottom of Krystal’s meltdown so he asks her to privately speak with him.

In true Krystal fashion, she spouts something that’s either philosophy or something about painting a house. And then she turns the subject to Kendall and her commitment inexperience. Because a two-on-one is obviously about provoking the contestants, Arie dishes Krystal’s words to Kendall.

Kendall is barely fazed by Krystal and proceeds to confront the villain herself. Contrary to Krystal’s claim, Kendall is pretty articulate about her emotions. She takes the high road and actually starts to empathize with the Bachelor baddie. “You’ve been through more pain than I can even understand. It feels very controlled. I don’t think you should try to control it.”

After staring blankly into space (clearly not listening to anything Kendall is saying to her), Krystal says she’s at a “loss for words.” Condescendingly, of course.

I get left on an island and Krystal sits at a table at a chateau? Where’s the fairness in that? #TheBachelor

At dinner, Krystal takes out her frustration on Kendall while Arie is absent. She accuses the taxidermy enthusiast of “patronizing” her. Krystal is close to crocodile tears with all the stress. Don’t let her break you Kendall!

Arie needs to make a decision ASAP. But just to make things more dramatic, he has separate chats with both of the ladies, but ABC doesn’t air those chats! Finally, Arie comes back and has made his decision. Bachelor Nation held their breath as it was finally announced and the reveal was the biggest sigh of relief!

The person going home is *drumroll* Krystal! Bust out the champagne, Bachelor Nation! (The remaining girls back at the house certainly did!)

Krystal struts off, smug as ever. Chris Harrison is probably waiting to invite her to Paradise.

We’re so happy Krystal was sent home that we barely pay attention to Jacqueline’s date! Quick summary: There’s a fancy car (that breaks down), Arie feels she’s too intelligent for him, they kiss, and she gets the date rose. Arie really seems to like Jaqueline and though they have not had much time together, she definitely sparked his interest from the start.

With that, we move to the Rose Ceremony. Lauren, Kendall, Bekah, and Jacqueline are safe. But with only three roses to hand out, two are sent home.

Arie hands out roses to Tia, Sienna, and Becca K. Which means it’s au revoir for Chelsea and Jenna!

Call one a taxidermy enthusiast.

Call the other one a cab. #TheBachelor pic.twitter.com/IoCZGOZjLp

Another Meltdown Around the Corner

With Krystal and Chelsea gone, there has to be another woman to carry the crazy torch forward, right? Post Rose Ceremony, Lauren slips into a dark corner to brood.

She has a quiet chat with a producer about the stress getting to her. She’s not able to handle Arie dating her and other women at the same time. We are thinking it won’t be long before she has an outburst, too.

Next week, The Bachelor heads to Tuscany in Italy! We can expect Lauren’s mood won’t be as sunny as we see tears on the horizon (even a few from Arie)!

Don’t miss The Bachelor’s Italian adventure next Monday at 8:00 p.m. EST on ABC.