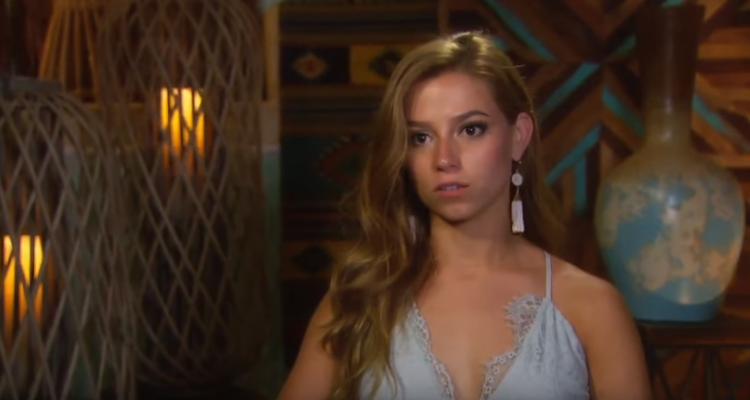 What Happened to Dean and Kristina?

As many may remember, Dean is a 26-year-old startup recruiter from Colorado and Kristina Schulman is a 24-year-old dental hygienist from Kentucky. They had bonded while the show was on hiatus due to the Corinne-DeMario scandal and even went to Kristin’s home town. When they get back to Paradise, Dean started spending time with 27-year-old Danielle Lombard (D-Lo) and next thing you know, there’s a love triangle. While Kristin was having a good timing and living in the moment, Dean seemingly wasn’t living in it completely with her and went on a date with Danielle as well—on the same night! This is hardly unheard of, especially since they all have to find love as soon as possible by getting to know everyone.

Kristina was ready to give her rose to Dean but that all changed when she saw what was really going on. Hurt by his choice to play both her and Danielle, Kristina decided to eliminate herself out of the equation and Paradise. Fred and Blake also went home, since Christen (Scallops—and those jokes went on way too long) gave her rose to Jack Stone. Christen went from “nobody calls me” to ” I need to unplug my phone” and it ‘s all because she had all the power last night! She had three men fighting for her attention like a speed dating session and we couldn’t help but wonder if they were just using her to stay on the show. Could they have been using her to get closer to someone else? There’s also rumors of Derek and Taylor being engaged but they have yet to confirm that in any way.

Who is Dean Dating Now?

“I would never blatantly disrespect you,” he told her. “I just haven’t fully figured out what I want,” Dean admitted to Kristina.

But the damage was done and now Dean and Danielle are dating, since she gave him a rose after all that drama.

“I think the break messed a lot of things up, Kristin said to People. “People didn’t know if the show would resume or not, so going back in, the couples that had started to form had to really reevaluate their relationships. I think when I came in, I definitely ruffled some feathers.”

Danielle added: “I remember directly asking Kristina, ‘I know you guys went on a date. What happened?’ and she said, ‘Oh it went well’ … [she didn’t] say, ‘He’s off limits,’ or something,” Lombard continued. “[Unglert] said he felt like things were getting too serious too quickly and he wanted to take a step back and date other people.”

However, Entertainment Tonight reported on this picture posted by Dean himself on Instagram captioned, “You were out of my league.” The debate remains as to whether or not the two are still an item, but the haters in the comments seem to agree with Dean in that she was “out of his league!”

Bachelor in Paradise continues on Tuesday, September 5 at 8:00 p.m. EST on ABC!

You were out of my league