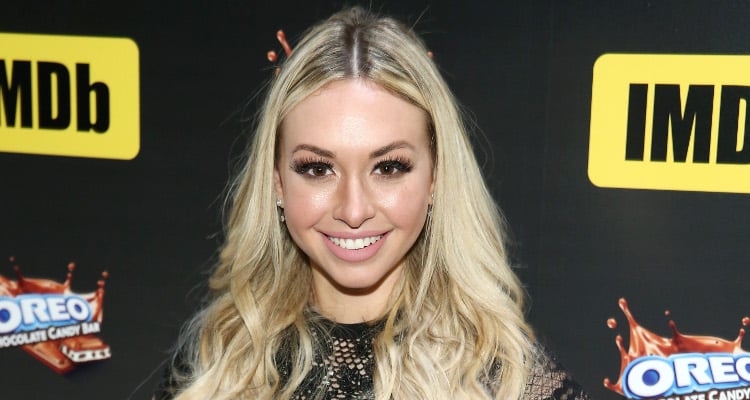 Bachelor in Paradise hit a roadblock soon after filming began. The Corinne and DeMario drama has come to a head. Corinne Olympios has broken her silence on the entire BIP issue.

Bachelor in Paradise suspended filming over the weekend with an investigation into the alleged misconduct by two of the contestants. Corinne Olympios and DeMario Jackson were villains on their respective seasons of The Bachelor and The Bachelorette. But who would’ve thought the drama they caused in Paradise would bring filming to a halt? With details obscure, the two parties have broken their silence. Corinne, in particular, has issued a statement in response to the misconduct investigation. What happened to Corinne Olympios? We’ve got the scoop right here.

On June 11, Warner Bros. announced it had suspended filming of BIP saying, “We have become aware of allegations of misconduct on the set of Bachelor in Paradise in Mexico.” They added that they are investigating the allegations and will take responsive action once it is complete.

Also Read: “Bachelor in Paradise” 2017 Cast: Who Will Find Love This Time Around?

The alleged incident took place a week before the announcement on June 4, the first day of filming in the paradise of Sayulita, Mexico. Corinne and DeMario reportedly got drunk and had a sexual encounter. A producer on set suspected misconduct and followed protocol by reporting it to Warner Bros. Corinne and DeMario were questioned and sent back home following which, the rest of the cast and crew left Mexico as well.

If Bachelor Nation remembers, DeMario and Corinne were considered villains in their respective seasons. Corinne’s antics to get Nick Viall’s attention in The Bachelor Season 21 included interrupting one-on-one moments, fighting with the other girls, and even going topless in a photo shoot. DeMario was sent home almost as soon as Rachel’s season of The Bachelorette aired for having unfinished business with an ex before coming on the show.

Corinne and DeMario largely kept their silence since news of the alleged misconduct broke out. DeMario was cornered by reporters but refused to comment on the situation only saying that Corinne is an “awesome girl.” On the other hand, Corinne has geared up for a lawsuit by hiring high-powered attorney Marty Singer and top Hollywood publicist Stan Rosenfield.

Through her reps, she has released a statement on Wednesday (June 14). “I am a victim and have spent the last week trying to make sense of what happened the June 4. Although I have little memory of that night, something bad obviously took place, which I understand is why production on the show has now been suspended and a producer on the show has filed a complaint against the production.”

Though Corinne Olympios claims she has no memory of the events, DeMario and sources from Warner Bros. say she was lucid and appears so in the camera footage. She further says that the episode was her “worst nightmare” that has become a reality.

She has hired professionals to deal with the issue and is also seeking help to for the trauma, “As I pursue the details and facts surrounding that night and the immediate days after, I have retained a group of professionals to ensure that what happened on June 4 comes to light and I can continue my life, including hiring an attorney to obtain justice and seeking therapy to begin dealing with the physical and emotional trauma stemming from that evening.”

DeMario Jackson refused to comment earlier, but Corinne’s statement prompted him to make one of his own. Saying his character has been assassinated, he will be taking “swift and appropriate legal action until my name is cleared and, per the advice of legal counsel, will be seeking all available remedies entitled to me under the laws.”

Bachelor in Paradise was expected to premiere on August 8. But the future of this show is obscure with the ongoing investigation and delay in filming.