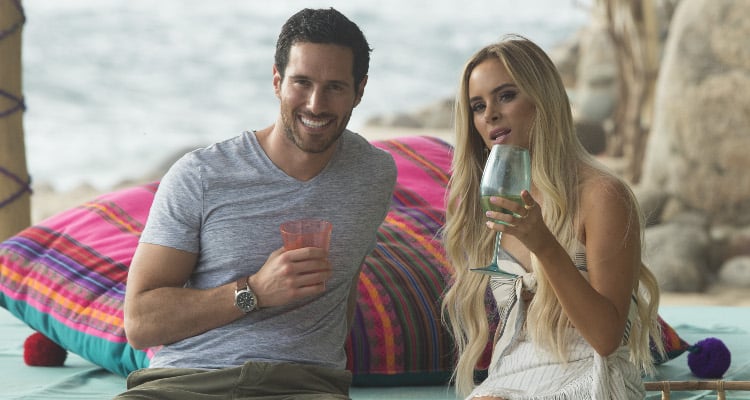 The Bachelorette season 13 wrapped up last night with Rachel Lindsay and Bryan Abasolo’s engagement announcement. But it wasn’t all about proposals and roses. The Bachelorette finale gave a sneak preview of the upcoming season of Bachelor in Paradise, including the moment when filming was suspended.

With Rachel and Bryan engaged, it’s time to head to paradise for another drama-filled love-fest. At the Final Rose last night, Chris Harrison addressed the Bachelor in Paradise scandal but no one expected to see that footage that got BiP  filming suspended back in June. The question of whether or not Bachelor in Paradise was canceled this season is answered in the preview. And we’ve learned some interesting facts that will go down this season. Take a look at some Bachelor in Paradise 2017 spoilers right here.

Bachelor in Paradise will premiere next week (August 14) with a diverse cast. Both newbies and veterans of the franchise arrived in the town of Sayulita, Mexico. From JoJo Fletcher’s season of The Bachelorette, we have model Robby Hayes, engineer Nick Benvenutti, banker Derek Peth, Vinny Ventiera from BiP season 3, and Alex Woytkiw.

Raven Gates, Jasmine Goode, Danielle Maltby, Lacey Mark, Taylor Nolan, Kristina Schulman, and Alexis Waters are returning to the franchise after losing Nick Viall’s heart in The Bachelor. Corinne Olympios didn’t return to Sayulita after the scandal with DeMario Jackson that caused filming for BiP to be suspended, pending investigation.

In early June, news surfaced that BiP had suspended filming and the cast was back home while producers investigated alleged misconduct. Corinne, who gained fame as a Bachelor villain, and DeMario, who Rachel sent packing after she found out he didn’t properly break up with his girlfriend before coming on The Bachelorette, reportedly had a sexual encounter and Corinne may have been too drunk to consent.

BiP was feared to be canceled, but that was not the case. The investigation revealed that there was no incidence of misconduct and filming resumed without Corinne and DeMario. However, a preview during last night’s Bachelorette finale showed that the alleged Corinne-DeMario drama will be a part of the show.

Bachelor Nation will be the judge to decide what happened between the two franchise baddies when BiP premieres. The two are also confirmed to be at the reunion special later.

Everyone’s favorite contestant on The Bachelorette this season, Dean Unglert, is in Paradise too. Judging from the preview, everyone wants a piece of him! Bring out the popcorn Bachelor Nation, Dean’s at the heart of a love triangle!

In the teaser, Dean is seen getting emotional over loving two girls at the same time and he can’t decide! Who are these girls? Kristina, the contestant who also had emotional backstory in Nick’s season of The Bachelor, and one of the Ferguson twins. With so much charm, it’s no surprise Dean is a fan favorite to be the next Bachelor, that is, if Paradise doesn’t work out. And it may not work out either! According to Reality Steve, the twins and Kristina are pretty furious with Dean.

When filming resumed, the other castmates made up for Corinne and DeMario with drama of their own. We’re very happy to see Alexis back in her shark costume —which she now knows is not a dolphin. And she also has a companion in a costume too. Though we didn’t get to see who.

Reality Steve gave a detailed breakdown of the first dates and Rose Ceremonies along with some potential couple alerts. Jasmine is making the most of Paradise and she may come out of this vacation with a man. There’s also Raven who may have taken a liking to a certain man and his crazy puppets.

Bachelor in Paradise season 4 will kick off with a two-night premiere on August 14, at 8:00 p.m. EST on ABC.