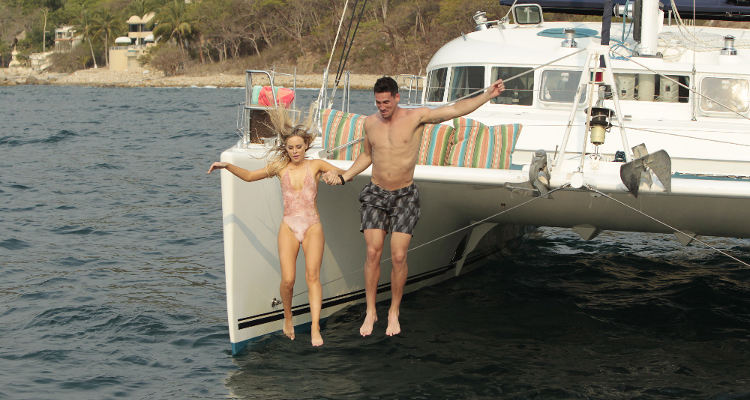 If the rumor mills are to be believed, Bachelor in Paradise stars, Amanda Stanton and Josh Murray, are getting hitched soon! Yes, you heard it first right here. For all the die-hard fans of the show eagerly Googling terms like, “Amanda Stanton Josh Murray engaged,” “Bachelor in Paradise engaged,” and “Famously single Josh Murray,” don’t go anywhere else because we’ll give you all the juicy details on who wins Amanda’s heart in BiP.

Famously Single star, Josh Murray is a contestant on BiP, along with mother-of-two Amanda Stanton, and the two are reportedly engaged. Murray who won The Bachelorette season 10, popped the question to Stanton, and is currently living with her and her two daughters, in Orange County, California, but plan to move to his hometown Atlanta soon.

Are Josh and Amanda Together?

Bachelor in Paradise‘s second episode airs today, and after the exit of villain Chad Johnson, it is time for all the bachelors and bachelorettes to get down to the serious business of falling in love. The rules of the show state that real-life couples should not be seen in public together, but it looks like Stanton and Murray don’t care for the rules, as they have been photographed by the paparazzi in public several times at Target, The Cheesecake Factory, and the Orange County Fair along with her children. This proves that the reel life couple is together in real life as well. Don’t they look great together?

Who is the Father of Amanda Stanton’s Daughters?

For all of Amanda Stanton’s fans, wondering who her ex-husband is, we’ll spill the beans on his identity right here. The father of Amanda’s adorable daughters, is a man named Nick Buonfiglio, a 28-year-old who works at the OC Register. The two were unhappily married for a long time and split up in 2014. She gave him many chances to mend his ways but he always wanted to go out with his friends, instead of taking care of his children. Their divorce was said to be traumatic, and there is nothing left between them now.

A source commented on the nature of Stanton’s relationship with her ex-husband, stating, “There is no unfinished business between the two of them. She is an amazing mom to their two young children but her relationship with Nick is nothing more than he is the father of their two children. I feel it is irresponsible to assume and write that they will get back together after the show. Amanda has moved on, and that is why she is on The Bachelor. Her past relationship is a closed book.”

On the show, Amanda initially shares an attraction with Nick Viall, but as soon as Josh shows up, she has eyes for no one else but him. Viall and Murray are shown to be vying with each other, for the stunning beauty’s attention. In an interview, Viall spoke out about his so-called rivalry with Murray, stating that, “People have this kind of idea of this rivalry between Josh and I — I for one, didn’t take it that way. When he came in, I was more or less indifferent. I think Josh, surprisingly, took a different approach. That world has a way of bringing out ego and pride and things like that.”

Viall has also gone on record to reveal his true feelings about Murray. He said, “[Josh] is a bit of a peacock. He thinks he’s a lion, though. There’s lions, and then there’s sheep. I think Josh is a politician. I think he answers things to be favorable. So, I can see how he’s very charming, and girls could fall for him easily.”

Murray isn’t one to hide his intentions, either. The promo of Bachelor in Paradise season 3 showcases Murray saying, “Nick and I have a history of dating the same woman. I know that Nick has taken Amanda out already, but honestly, I don’t care.” The man clearly doesn’t waste time mincing his words!