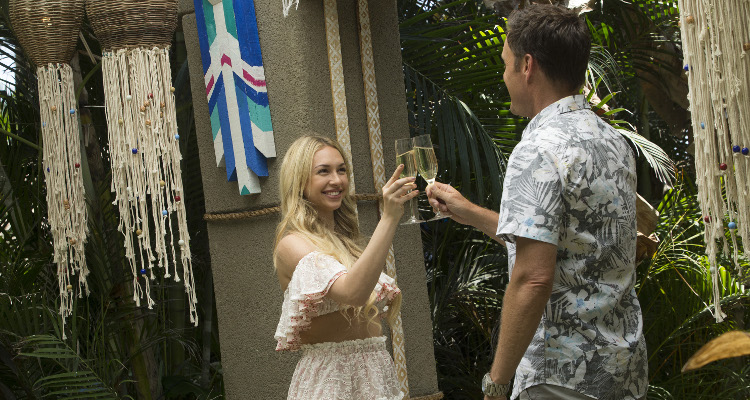 Bachelor in Paradise kicked off season 4 and we’re only halfway through the festivities. Part 2 of the season premiere will air tonight and we finally get to see Evan Bass and Carly Waddell’s wedding. For those who haven’t caught up with the show, consider yourself warned: This piece contains spoilers.

The season opens like any show of the summer genre. Chris Harrison in his paradise attire welcomes us to watch the events that happened before production shut down. By that, he means they will show everyone arriving and getting drunk. No, they won’t be showing the actual thing that transpired between Corinne and DeMario. Even though teased us with it all week.

Raven was the first to sign on for BiP and she’s the first to arrive followed by Dean. And he’s set off dreamy alarms everywhere. Even Danielle M., who arrives next zooms in on Dreamy Dean. That leaves Raven to listen to Ben Zorn’s dog talk.

Dean’s first Bromance, Iggy is here and he’s more excited for Dreamy Dean than any of the ladies. Then it was Jasmine Goode who shares the first kiss of season 4 with Nick. Jack Stone opens with “I’m not a serial killer” —isn’t that what a serial killer would say? We live for Alexis, her shark costume and her dolphin cries. She has the panache to come from the sea in the shark-suit rather than just walk up to the door of the resort.

Raven is showing just how much she loves her girl, Rachel and the show. Just as she’s wishing DeMario doesn’t show up, he walks right in and pretending he’s a sweet guy. He’s all about redemption, which we know he won’t be getting. Leave it to Raven to welcome him with an “Are you single?” But DeMario may have taken Raven’s subtle shade as flirting, because he’s taking her aside and talking about “vibes” and “fun.” So he thinks if he gets Raven on his side, boom! Redemption. Except Raven says he’s “full of s**t.”

Derek and Alex from JoJo’s season arrive followed by the one and only Corinne. She’s here with wine, cheese pasta, and her own brand of wisdom. She and DeMario bond over coming from New Jersey. They are so occupied withe each other, Corinne doesn’t even notice her nemesis, Taylor, arrive and cozy up with Derek.

The rest of the arrivals —Lacey, Vinny, Diggy, Matt, and Nick— are followed by Amanda. She was engaged to Josh Murray at the end of season 3 but that didn’t last. So she’s here for a fresh start and returns the engagement ring to Chris Harrison. During this, Corinne jumped into the pool with her clothes on, and DeMario in tow.

All that aside, the premiere gets emotional when Harrison gathers everyone to bid farewell to Paradise’s resident bartender, Jorge. He’s leaving to fulfill his dream and start his business, Jorge’s Tour-ges. (I’m not crying, you’re crying). He’ll be replaced by Wells, who’s here only to make drinks and not go on dates. The tragedy! Fun fact: He and Danielle have been friends for a long time.

Pretty large zapatos to fill. You can’t replace a legend, you can only try and not screw things up. #bachelorinparadise ???? @Jorgebartenderr pic.twitter.com/enLZ1xFfOO

If it hasn’t been established already, Dean is the favorite of the bunch. He goes straight for Kristina and they bond over their sad family life. Or, at least he is. Kristina’s more into his blue eyes and white teeth.

Harrison gets to the next order of business: The women are handing out roses on Week 1. Kristina with the date card jumps at the chance to hang out with Dreamy Dean. They already look smitten in their dance date and they kiss amid a shower of confetti.

Meanwhile, Derek and Taylor hit it off, Lacey and Iggy hit it off, Jasmine and Matt hit it off, and Nick gets drunk. Lacey, however has to leave after she found out her grandfather passed away. But she’s replaced with Robby Hayes and his perfect hair. He uses his date card for Raven, much to Ben’s disappointment. Raven initially thinks Robby is cute but she’s put off by how much Robby loves Robby. Before the Rose Ceremony, Ben tries his luck with Raven again and it works. At the end of Raven and Robby’s date, she kisses Ben. Apparently, anyone is a step-up from Robby.

Also kissing: Derek and Taylor. And Danielle is getting closer to Jack Stone. Wells, you need to rescue your friend from a serial killer!

It all came to a halt when the producers called out Corinne and DeMario and the cameras stopped rolling. That’s where the episode ended. Leave it to BiP to say everything will be revealed and then reveal nothing.

Part 2 of the season 4 premiere will likely take off from when filming resumed, this time without Corinne and DeMario. Bachelor Nation is sure going to be disappointed they won’t get the promised drama that brought production to a halt. Nevertheless, we’ll reserve our judgment until episode 2 airs.

What else do we have to look forward to? The ladies will send four men home in the first Rose Ceremony. But whether it will happen before production halted or when filming resumed is anyone’s guess.

What we will see though is Carly and Evan, one of the franchise’s few successful romances, tying the knot. Their wedding was held in Paradise back in June among their family and friends, including a few Bachelor contestants.

The cast, sans Corinne and DeMario, return to Paradise and sit down with Harrison to talk about the moment when filming was halted. According to ABC, the cast tries to pick up from where they left off but the break in momentum has changed feelings for someone. We can expect some drama when one of the ladies expecting a date card if disappointed when another girl gets it.