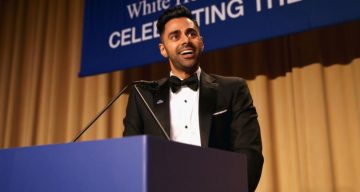 Stand-up comedian Hasan Minhaj became a Daily Show correspondent and performed at the White House Correspondents’ Dinner in April. On May 23, he debuted his special on Netflix, Homecoming King. The news of this rising star has led people to wonder, who is Hasan Minhaj’s sister?

Minhaj’s sister is Ayesha Minhaj and we’ve dug up some interesting facts about her. Although she isn’t a comedian, a story about her was used for an earlier skit by Hasan. In the skit, he jokes about meeting his sister for the first time and the strangeness of it all. If you want to learn more about Hasan Minhaj and Ayesha Minhaj, keep on reading!

Based on her LinkedIn page, Ayesha is an associate at Skadden, Arps, Slate, Meagher & Flom LLP and Affiliates. She received a Bachelor’s degree in Political Science at the University of California, and her Doctor of Law (J.D.) from the University of Pennsylvania Law School. She resides in the San Francisco Bay Area. Her work experience also includes time at NBCUniversal Media, LLC as a Legal Intern, the General Counsel’s Office, and at NBC News as an associate.

Hasan mentioned in his stand-up shows and in The Homecoming King that he and Ayesha did not know each other as children. His parents were living in the States when he was born in San Francisco, but when his mom went back to India, she gave birth to his sister. Ayesha Minhaj’s age is unconfirmed, but some sources say she is in her late twenties. What’s interesting is that they did not officially meet until he was eight years old! He joked about how he met his sister, saying that his parents came to the U.S. to have him, but that they could not bring his mother back from India, due to immigration issues.

In an interview with Vanity Fair, Hasan shared his parents’ reaction to his comedy special at the White House Correspondents’ Dinner. Sharing his sister’s report of the day, his parents seemed to be concerned at the reactions of the attendees. He explained, “And when they came out of the show, they were like, ‘Oh, okay. That is okay.’ A lot of what I talk about in the show is kind of airing out dirty laundry within my family, within the Indian community, within Hindu-Muslim relations. I think my parents’ concern, which I understand where they’re coming from, is why take this risk? It’s a little too real.” Thankfully as the audience became more engaged and were visibly having a positive reaction, and his parents felt more at ease.

For now, there is not much information on Ayesha, or the rest of Hasan and Ayesha Minhaj’s family. But as this Netflix superstar rises in comedy fame, more information may be revealed soon. Is Ayesha Minhaj married? Based on the lack of a ring on her finger in Ayesha Minhaj’s Instagram pics, it doesn’t seem so!