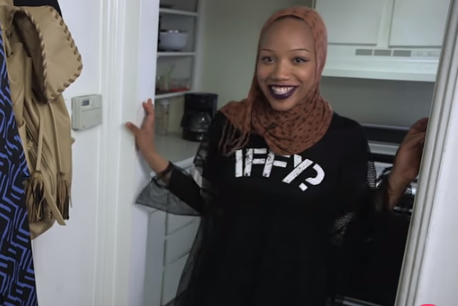 Ayana Ife is the first Muslim woman designer on the reality based show, Project Runway. On the show, hopeful designers take on challenges to showcase their talents in the fashion world, and Ayana Ife from Project Runway is certainly one to look out for! Get to know more about her before the Project Runway season 16 finale, right here in our Ayana Ife wiki!

Project Runway is a reality based designing show, with Heidi Klum and other notable designers at the helm of affairs. The show follows 14 budding designers who are supposed to showcase their talent, presence of mind, and fashion-forward ideas to the jury. The winner will get the coveted chance to feature his/her collection during New York fashion Week. Ayana Ife from project runway gained fame for being a Muslim designer who presented fashionable ‘modest’ clothes that could be worn by all women across the globe.

A Mirror to Her Mind

In a Facebook post from November 14, she uploaded three pictures along with a message. More than the pictures, it was actually the message posted that showcased her talent and grit, apart from her determination. She wrote. “Continuous growth and development are extremely important to me as an individual, and an artist. My collection documents my personal journey of ups and downs using nature (woods, trees, flowers, weeds etc.) as my inspiration…it’s a reminder to myself to always remain optimistic in the face of adversity and keep pushing forward. To get back up when I am knocked down and never give up!” She also mentions that, “Layering shows the different stages of my life and ruffles are cherished good times. The story is filled with highs and lows and the end is hope, strong believe and affirmation, that God willing, my future will be Fashioned by me”.

When she was asked to do tailoring from Judge Tim Gunn, she never expected that the response would be so huge and enormous. It was. According to Ife, she felt the pressure saying, “There’s a lot of weight on my shoulders.”

Today, she is not just a Muslim woman who is designing to win the reality based show. She is hoping her designs ignite much more than that. As a designer, she gears much of her work to the modern woman of today, who wants to be modest yet fashionable without bearing it all. Ayana Ife’s age is 27 and even at such a young age, she knows exactly wants from life and how to make her fashion designer dreams a reality.

Ayana Ife’s Instagram account showcases her clothes and fashion sensibilities. She grew up in Utah but originally hails from Nigeria. And on Project Runway, the stakes are getting higher each episode. She is seen as Brandon Kee’s biggest challenger, not only by fans but also Ayana Ife’s family and friends.

Will she be able to defeat Brandon Kee in the finale? It’s down to the wire now and fans can’t wait to see if Ife will be the last one standing. Tune in to Lifetime tonight to watch it all go down!